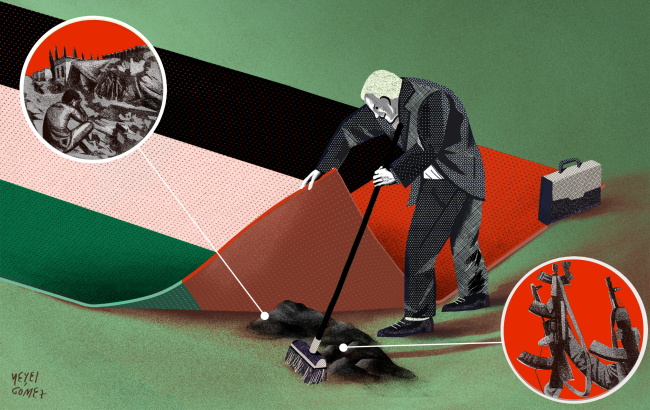 In a new report Corporate Europe Observatory uncovers United Arab Emirates' PR strategy via various lobby vehicles in Brussels (1). The UAE has an image as a moderate and friendly key ally to the EU, yet its foreign policy aims are pursued in bloody wars from Yemen to Libya; and human rights abuses are rampant in the autocratic, oil-rich state (2).

As part of the kingdom's increasing assertiveness, the UAE has become one of the highest spenders on PR world-wide and since 2017 has launched a major 'soft power' push. Its lobbyists in Brussels don’t just help whitewash the country’s image; the aim is to proactively shape the narrative and the way Europe looks at it and its role in the region.

The narrative of ‘authoritarian stability’ is weaponised to appeal to European politicians and officials, projecting UAE's autocratic rulers as a stabilising force in the Gulf. It labels any attempts at pluralism, civil society, or the activity of rival powers, as a gateway to Islamist chaos and terror.

The new CEO-report uncovers the ways since 2017 the UAE implements its 'soft power push' in the heart of Europe; and these are some of the key players:

1. The Bussola Institute is a mysterious new Brussels think tank with a roster of impressive European honorary board members including former Spanish Prime Minister José María Aznar, former Secretary-General of NATO Anders Fogh Rasmussen, former Irish President Mary McAleese; plus former Prime Ministers of France, François Fillon, and Croatia, Jadranka Kosor, as well as former EU Commissioner Anna Diamantopoulou. While it presents itself as a serious research institute on generalised EU-Gulf relations, all its institutional relationships are with the UAE and it plays a 'strategic communications' and influencing role for the country's favoured policy positions. It has not disclosed its source of funding.

3. A new Dutch/Brussels PR firm Westphalia Global Advisory's main client is the UAE's Embassy to the European Union; the founders used to work directly for UAE Ministry of Foreign Affairs under the current Emirati ambassador to the EU. The firm offers 'privatised diplomacy' services to the autocratic kingdom, helping it shape its goals with regards to EU policy.

Corporate Europe Observatory states: "Why does it seem so easy for think tank policy wonks, lobby consultants, and middlemen in Europe to play the role of hired gun for repressive regimes, and for so few questions to be asked? Clearly anno 2020, lobby transparency in Brussels and the European Union as a whole, still leaves a lot to be desired; European politicians often like to talk about ‘European values’ but opacity in this case benefits a oil-based repressive regime.”

2. The Associated Press reported that there was rampant use of rape and sexual torture in “UAE-controlled" prisons in Yemen. The UN reports that despite an apparent withdrawal the UAE still backs 90,000 Yemeni fighters on the ground and conducts aerial attacks. The UN describes the situation in Yemen as the "world's worst humanitarian crisis".

3.The National Media Council is a UAE Government body that oversees the kingdom’s media sector.