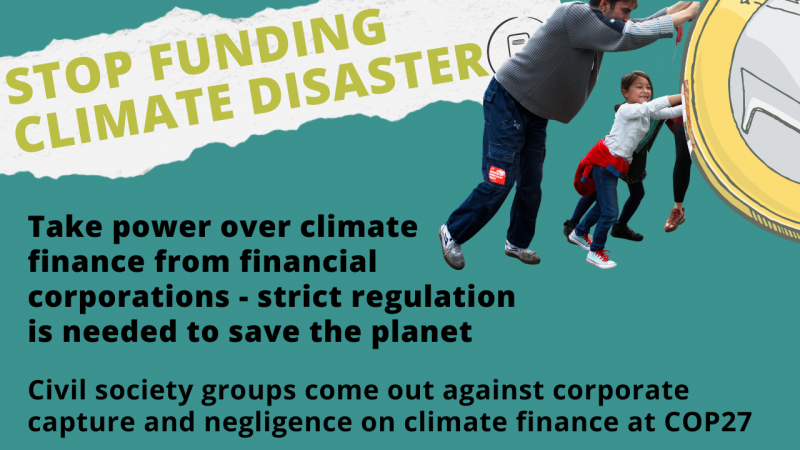 Big bankers are part of the problem, not the solution

We cannot save the planet from disastrous climate change without tackling financial markets. As long as trillions of dollars go unhindered to fund yet more fossil fuels and deforestation, it will not be possible to halt climate change or enable communities to adapt.

Acknowledging the hefty role finance plays in furthering climate chaos, a key statement of the Paris Agreement was to make “financial flows consistent with a pathway to low greenhouse gas emissions and climate-resilient development”. Although this commitment is very much welcomed, since the agreement was signed in 2015, the world's 60 largest banks alone have invested $4.6 trillion in fossil fuels projects, including new exploration infrastructure. Investors are currently reaping huge profits from high fossil fuel prices, while no regulation forbids them from investing even more money in our planet’s demise.

How big banks took over

This outrageous scenario is only possible because instead of regulating finance, as demanded by global climate justice movements since 2010, COP26 allowed coalitions of finance corporations to take control — with the blessing of governments and the United Nations (UN). Under the leadership of former governor of the Bank of England, Mark Carney; and Wall Street financial tycoon, Mike Bloomberg, the so-called Glasgow Financial Alliance for Net Zero (GFANZ) took charge of the private finance governance agenda, leaving some of the globe’s most important financiers of fossil fuels and deforestation in charge of reforming private finance to cope with the climate challenge, while official bodies were relegated to an unassuming advisory position.

From the beginning, it was clear that finance corporations and GFANZ saw their engagement with COP as yet another business opportunity to bring in profits from global efforts to stop climate change. Their 'Net zero by 2050' initiatives never envisioned any significant and prompt cuts in financing fossil fuels, nor did corporations ever intend to change their business models. Yet these measures are urgently needed.

Instead, they built a narrative based on wishful-thinking future technologies while offsetting emissions, leading to yet more emissions and land grabbing in the Global South. Moreover, they now take advantage of their powerful position to promote their preferred model of climate finance, which depends on tax breaks and onerous investment protection, yet again to the detriment of the Global South.

This capture of climate governance by private finance was only possible due to the exponential growth of multi-stakeholderism within the UN system. This phenomenon, which describes the capture of multilateral governance where corporations are invited to sit at the side of states at decision-making tables, allowed big bankers to set the agenda and then carry it out according to their ideas and visions. The result is that a crucial part of climate governance policies are designed in board rooms in Wall Street and in the City of London, leading to climate chaos and greenwashing.

The benchmark can no longer be whether finance corporations fare a bit better than last year, nor if they envision some improvements in the long term. The benchmark must be whether their investments push the planet above 1.5°C. The science is clear: both the International Energy Agency (IEA, 2021) and the Intergovernmental Panel on Climate Change (IPCC, 2022) have stated that any new investments in fossil fuel infrastructure takes us over the 1.5°C limit for dangerous runaway climate change.

Governments, with the support of civil society and the climate movement, need to take control over private finance. We need cogent regulations to keep us away from total climate collapse. We need to look at taxation of financial transactions, and sweeping reforms of financial markets where regulation, supervision and accountability are central. We need to start afresh.

Big bankers and free markets are part of the problem, not the solution.

Our demands to our governments

The undersigned, therefore, urge governments to:

* Limit and regulate the influence of the financial industry in decision-making bodies at COP. Financiers of climate disaster, such as GFANZ, should have no platform at any COP, no seat in any advisory group, and none of their representatives should have any role at any decision-making bodies. Furthermore, the United Nations Framework Convention on Climate Change must adopt a conflict of interest accountability framework and enforcement mechanism that limits contact with companies involved in fossil fuel exploration, distribution and financing"

* Make the whole financial industry coherent with the clauses and targets of the Paris Agreement. We need, at minimum and not exclusively, strong rules to phase out investments in fossil fuels and deforestation; and central bank interventions to raise the price of capital for carbon intensive companies.

* Guarantee that developed countries take immediate steps to stop all investments in fossil fuel projects, and that a credible plan is developed for funding the transition in the Global South. This plan needs to answer to Global South demands and to the disproportionate historic responsibility the Global North has for climate change. It also must include compensation plans for keeping fossil fuels in the ground.

* Substantially increase funds for the Global South to tackle climate change. The annual 100- billion-dollar fund, promised in 2009 but never honoured, needs to be revisited, escalated and it must be on based on grants. The price of the transition runs into trillions, not billions. It is necessary to agree on taxation of financial transactions and of corporations to meet this target.

Al-Haq, Law in the Service of Man (Palestine)

Comitato per i Nuovi Desaparecidos

Committee in Solidarity with Indigenous Peoples of the Americas (CSIA-Nitassinan)

DAWN (Development Alternatives with Women for a New Era)

Focus on the Global South

Milieudefensie - Friends of the Earth Netherlands

The Association for Women's Rights in Development (AWID)

The Platform of Filipino Organisations in Europe

WIDE - Network for Women´s Rights and Feminist Perspectives in Development