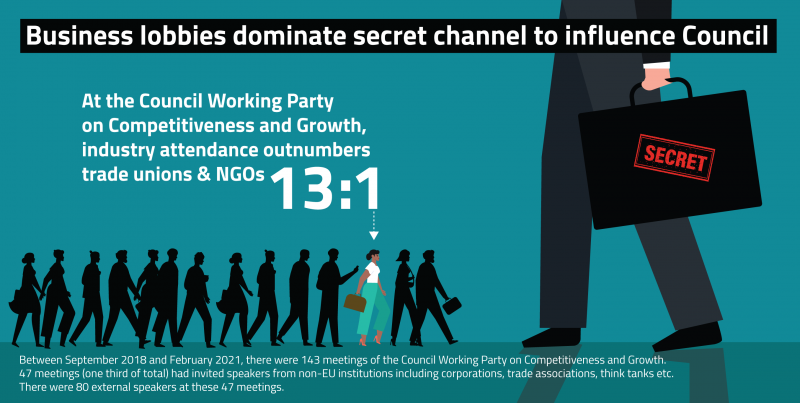 New research by Corporate Europe Observatory shows how a behind-the-scenes Council 'working party' which plays a key role in preparing the positions that member states take in the Council on proposed EU laws and policies is offering privileged access to corporate interests.

Corporate lobbyists are actively and systematically invited to address meetings of the Council Working Party on Competitiveness and Growth. Industry representatives have outnumbered trade unions and NGOs in attending these meetings 13 to 1 in the 30 months analysed in this research.

There are 150 such preparatory bodies in the EU Council, and they have faced strong criticism from the European Ombudsman, MEPs, and civil society. They operate behind a veil of secrecy: while meeting agendas are published, no minutes are taken.

The Working Party on Competitiveness and Growth is of especial interest to corporate interests because of its focus on many hot topics including the EU single market, digital strategy, and 'better regulation' - the EU's deregulation drive. The lobbyists' presentations are not proactively published by the Council and some invitees are not even part of the EU lobby register. In July 2019 the Council Secretariat committed to issue guidelines on the issue of external speakers at such meetings, but two years on, this has yet to happen.

The research shows that while industry held 65 per cent of the external speaker opportunities, alternative voices from NGOs and trade unions were rarely invited with just 5 per cent of speaker slots. [1] BusinessEurope alone attended seven meetings, while DigitalEurope, European Chemical Industry Council (CEFIC), the European Round Table for Industry, as well as organisations with close links to Big Tech also appear on the attendance list. These meetings provide lobbyists with an opportunity to present an organisation and its demands or views, often at very timely moments. [2]

Vicky Cann, Corporate Europe Observatory researcher said: "This Council working party is offering a shocking level of privileged access to big business to present its lobby demands. Behind closed doors, with little or no transparency about what is said and who is saying it, this secret lobby channel is surely prized by industry lobbies. This is another important part of the jigsaw of how corporate lobbies influence the work of the Council and member states."

Vicky Cann concluded: "Those with private and commercial interests should not be favoured with special invitations to present their policy demands to member state officials tasked with developing Council positions on important topics. This secret channel for corporate lobbyists must be blocked – urgently."

1. Our data covers the period of September 2018 and February 2021 when there were 143 meetings of the Council Working Party on Competitiveness and Growth and its sub-groups on Better Regulation, Industry, Internal Market, and Tourism. 47 meetings (one third of total) had invited external speakers (corporations, trade associations, think tanks etc). There were 80 external speakers (defined as those coming from an organisation outside the official EU architecture) at these 47 meetings. Of 80 speakers: 52 or 65% were from industry trade associations/ companies/ consultancies; 2 or 2.5% were from NGOs; 2 or 2.5% were from trade unions; 8 or 10% were from think tanks; and government/ academic/ others made up the other 16 or 20%.

2. As one example, in March 2019, BusinessEurope addressed the working party just as it was becoming clear that the EU's proposed, and highly controversial, Services Notification Directive did not have enough support to pass into law. The directive's supporters were looking for alternative ways to introduce oversight and enforcement powers over decisions taken by national authorities and city councils on a vast range of services, from childcare to energy and water. A BusinessEurope demand, presented at the meeting, was implemented by the end of the year.