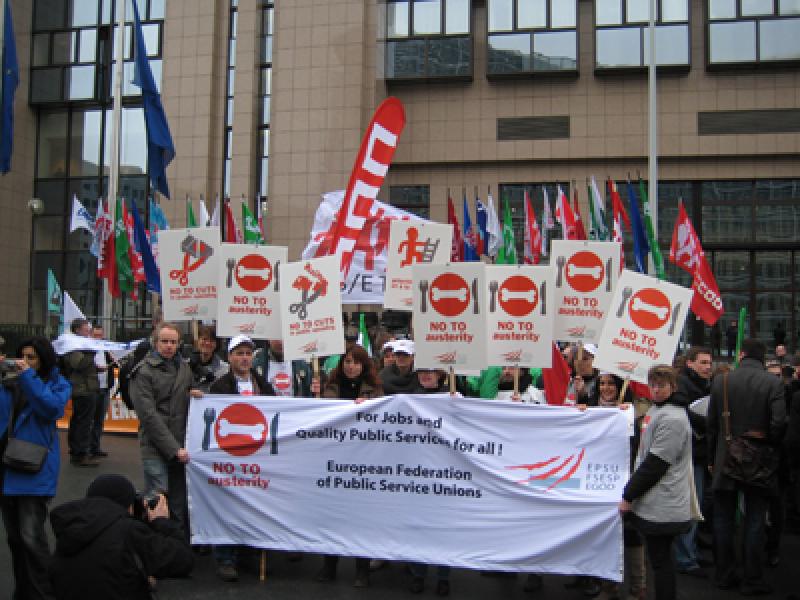 On the 2nd of March 2012, 25 EU member states signed what they called the ‘Stability Treaty’. It is the big business lobby’s dream come true, but social rights campaigners across Europe are calling it an ‘Austerity Treaty’ and warn that it will put enormous pressure on ordinary people’s welfare and living standards.

For years, EU-wide big business lobbies like BusinessEurope and the European Roundtable of Industrialists have been advocating a strengthening of EU economic governance; the new Treaty is fully in line with such corporate demands.

At a meeting organised by BusinessEurope on 2nd December 2011, ahead of an EU summit on 9th December, the chairs of the national employers’ federations issued a ‘Declaration on Economic Governance’, also referred to as the ‘Businesses’ Plan to Save the Euro’, containing two very important demands:

The first draft of the new Treaty was adopted during the EU Summit on 9th December. It included these two very concrete demands2 and these remained in the final version signed by EU leaders on 1 March 20123:

On 2nd December 2011, BusinessEurope also asked that European Stability Mechanism lending should be “conditional on a credible adjustment plan”. In some of the introductory text to the new Treaty it is mentioned that “the granting of financial assistance in the framework of new programmes under the European Stability Mechanism will be conditional, as of 1 March 2013, on the ratification of this Treaty by the Contracting Party concerned”. This means that countries should adhere to the two provisions above in order to access ESM funding.

BusinessEurope immediately welcomed the first draft of the Treaty by saying it is “in line with the statement we published this week, ‘Businesses’ Plan to Safeguard the Euro’”4

On 23rd December, BusinessEurope wrote to the incoming Danish EU presidency that “European leaders need to put in place the new governance structure, or ‘fiscal compact’, agreed at the 9 December Council”, adding that “it is imperative that we5 make swift progress on finalising the details of the new agreement and ensuring its legal implementation”.6

This self-confident ‘we’ in the last quote indicates that just as with the Europact+7 and the Six Pack on economic governance8, BusinessEurope probably exerted substantial influence on the Treaty, urging a more authoritarian form of neoliberal governance of member state economies by Brussels, leaving less scope for manoeuver and effective democratic control of fiscal policy.

If the provisions were put in place today, then the 23 EU member states that are currently subject to the excessive deficit procedure9 would have to accept the Commission’s recommendations even if a majority of member states disagreed, and would have to agree to a detailed programme of economic reforms which would then be legally binding under ‘EU law’.