A Trojan … Bee? Front group for BASF co-organise event at the Parliament on ‘bees and biodiversity’

BASF as a pesticide company has a great interest in sustained use of pesticides. Insecticides are of course in particular harmful for insects. BASF product fipronil (trade name Regent) was banned in 2004 by the French government for its harmful impact on bees. Even till years later, BASF kept promoting the use of Regent in particular together with other insecticides called neonicotinoids. In a 2008 publication “The Science behind Seed Treatments’, BASF’s Craig Lindholm boasts that BASF’s insecticide “gives you the best below ground insect control” especially when used in ‘synergy’ with neonicotinoids.

Neonicotinoids are now shown to be very toxic to bees. Primary producer of these insect killers is Bayer with its product imidacloprid being sold under many different trade names such as Admire, Advantage, Gaucho and Winner. Syngenta’s insecticide Cruiser also belongs to this category. Imidacloprid has been banned by the French governement in 1999 for use on sunflower seeds and in 2004 for maize. Two new studies published in Science this March further increased the evidence that neonicotinoids are in particular damaging to bees.

Both fipronil and neonicotinoids are insectides that are applied as seed coatings. They will then be found in the plant’s roots, leaves, stems, pollen and nectar, and that is why they are called ‘systemic’ pesticides. Bees and other pollinators are exposed to small doses of the poison every time they collect pollen or nectar from these plants.

Clearly, it is in BASF’s interest to downplay the harmful role of pesticides, and instead stress other causes such as a lack of food (which can also be attributed to industrial high input farming). And that was exactly the message of the exhibit at the European Parliament last week. BASF’s project is on the one hand a classical example of greenwash and of using front groups; but it is also a classical lobbying strategy. Now that the disastrous bee decline is getting headlines, it is crucial for the company to shift the focus of media and decision makers on one of the causes that would not substantially hurt their interests in any way. Flower edges around fields of monoculture industrial farming – what better way to cover up this farming model’s failures!

On the network’s website (www.bees-biodiversity-network.org), a search for BASF’s name does not give any results. It’s logo is absent. However, the domain name is registered by  Sandrine Leblond, a BASF employee in France. The website says that the Bees Biodiversity Network is “an NGO currently undergoing significant expansion” and that it was created in France by Philippe Lecompte, a “professional beekeeper in Champagne”. This website does not give any hint about the corporations behind it.

In France however, the network is called “Réseau Biodiversité pour les Abeilles” and has a website that gives a lot more information. It shows that the network has 250 partners, including BASF and many other seed companies and industrial agricultural cooperatives. Philippe Lecompte features in a March 2011 publication by BASF called ‘Agricultural Dialogue’. In this publication, BASF again downplays the impacts of pesticides on bees and blames any impacts on the misuse of the product by the farmers:

“According to the European Food Safety Authority (EFSA) and long term studies in Germany and France, correlation between winter losses of honeybee colonies and high pesticide presence is rare. … BASF therefore works closely with partners to investigate the suspected pesticide impacts and eradicate human misuse of crop protection products.”

The french website of the bees network echoes this position in a blatantly misleading way: “The cohabitation of bees and pesticides is very possible. If some pesticides (insecticides) pose a threat to bees, the risk of intoxication is close to zero when used respecting the user instructions. Intoxication only happens when products are not correctly used, applied on the wrong moment or in the wrong dose”.

This statement seems highly doubtful in itself, but is very misleading precisely because these insecticides in question are often applied as seed coating, and therefore are not applied directly by the farmer. The farmer simply plants the treated seeds, after which the insecticide goes at work in the way it is meant to do by the designer of the product: it is present in the plant at all times, exposing pollinating insects to  small quantities whenever it is feeding on the plant.

The EFSA pesticides panel (PPR panel) has recently published a new opinion on the impacts of pesticides on bees. In this opinion, based on the work of an expert working group, the panel says there are gaps in the knowledge on low dose exposure.

In France, the National Union of french beekeepers UNAF has been aware about the links between the Réseau Biodiversité pour les Abeilles and BASF. In an article in Les Echos in 2009, UNAF explains that it has been strongly attacking pesticides and their producers about bee decline and the fact that the Réseau focuses mainly on crop diversity is related to their support from BASF and other seed firms. Pierre Testu who runs the network in France justifies the BASF support as their presence would “reassure cooperatives or farmers”.

It is not the first time that BASF uses a front group to divert attention from pesticides and to greenwash their activities as protecting the bees. BASF has used the World Business Council for Sustainable Development (WBCSD), a veteran lobby group which brings together some 200 companies, as a platform to promote their engagement in the ‘Le Réseau Biodiversité pour les Abeilles’ as a proof of their commitment to sustainable agriculture and biodiversity protection.

Pollinators are of crucial importance to world food production and biodiversity. It is scandalous that the European Parliament allows its public space to be abused by a front group of the pesticides industry, misleadingly called the Bees Biodiversity Network. Corporate Europe Observatory has submitted a complaint to the Questors of the European Parliament, arguing that the exhibit was in fact a lopbby event intended to influence MEPs and that it failed to clarify the role of BASF.

MEP Franco’s office confirmed that Mr Franco (see here on pictures of the events inauguration) was aware about the nature of the Bees Biodiversity Network as being set up by BASF. The role of the UNEP as partner, and the fact that BASF’s ‘bees biodiversity project’ is being applauded in the run up to Rio +20, is entirely inappropriate. This partnership is one of many examples of the growing corporate capture of UN processes. 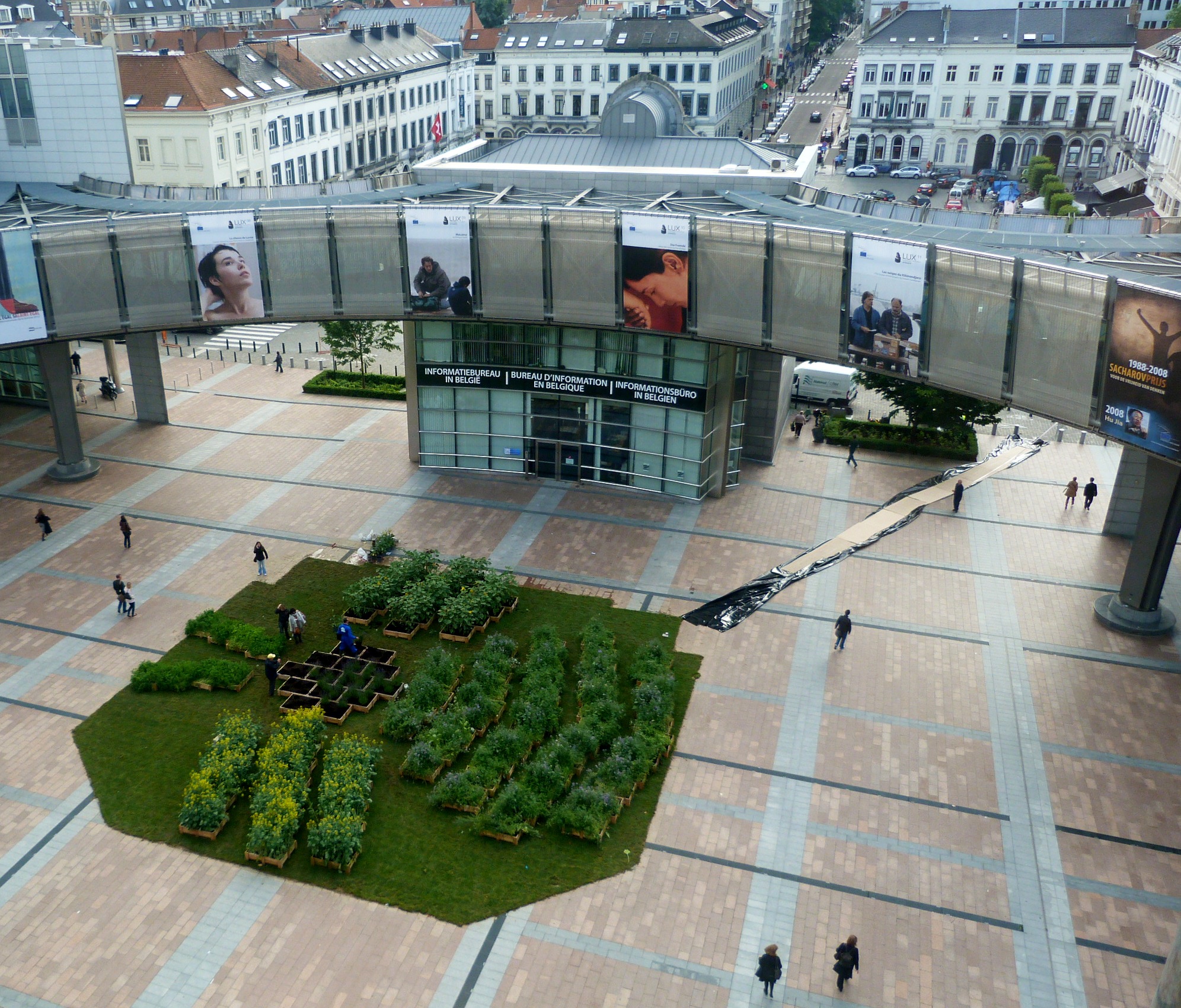 3 June, European Parliament. A large flower garden (540m2) was set up in front of the European Parliament with ‘bee- and pollinator-friendly plants and flowers’. In  bird’s-eye view, the plants formed a large, 20 metre long bee. A Trojan bee perhaps?

But of course neither the Greens/EFA nor beekeepers and NGO's are naïve enough to think that we've won and the bees are now safe. The Commission also announced that exceptions to the ban on use of these neonicotinoids are still allowed, but will be limited 'to the possibility to treat bee-attractive crops in greenhouses, in open-air fields only after flowering'. One of the basic problems with this is of course that these systemic pesticides can be used after flowering of plants and also on crops not attractive to bees.
Greets!
Melissa Green
https://handygardeners.com/