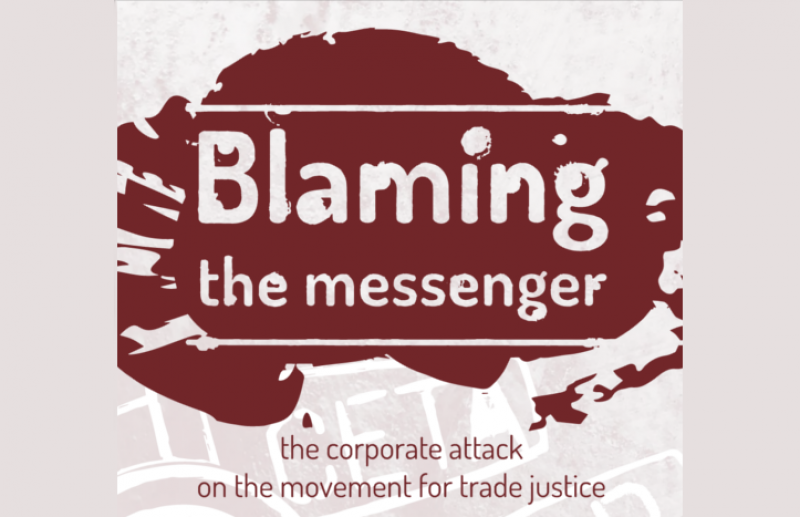 The corporate attack on the movement for trade justice

Corporate lobbies and think tanks have gone on what appears to be a concerted attack against NGOs and other groups opposing new free trade and investment deals. Our new report, Blaming the Messenger: the corporate attack on the movement for trade justice, exposes how big business interests with the most to gain from the trade agreements have been trying to undermine and discredit civil society groups.

Blaming the Messenger, co-published with LobbyControl, looks at some of the big business associations and corporate think tanks that have been trying to delegitimise their civil society critics. It shows how the arguments and tactics used by corporate interest groups do not stand up to scrutiny, and how big business political and media allies may be facilitating a more general crackdown on NGOs.

Trade deals like TTIP and CETA caused a tidal wave of criticism from civil society organisations, academics, small businesses, local governments, trade unions, judges, and others. These deals are seen as being designed primarily for the benefit of big business, at the expense of environmental and social protections. The strength of this opposition is part of the reason that TTIP has been put on ice (at least for now). 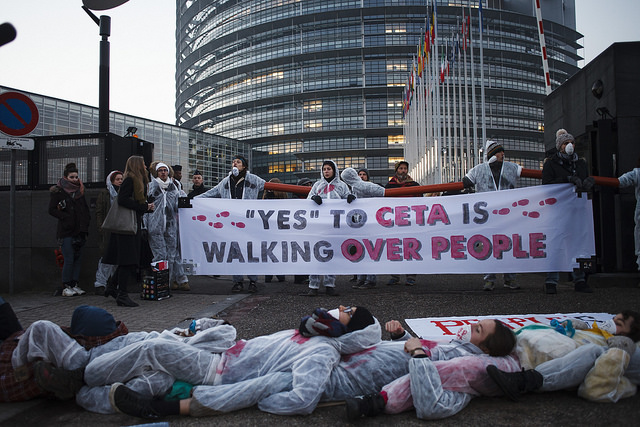 Corporate proponents of these deals have responded by attacking the movement for a democratic, socially and ecologically just trade policy. Their tactics include accusing civil society groups of scaremongering and manipulating an “uneducated” public for financial gain and casting doubt on research. They have associated critics with the far-right and populist arguments against globalisation; accused them of being backed by Russia, and of  being funded by dubious means.

Of most concern is the way that corporate interests have called for a crackdown on civil society – a freezing of democratic debate over trade policy, and by implication, corporate power and the economic system as a whole.

Some of the most prevalent arguments and smear tactics being used by big business lobbies and corporate think tanks outlined in the report include:

Faking it: Attempting to use grassroots tactics to promote free trade deals
One of the tactics used is the attempt to mimic grassroots organising in the interests of these free trade deals. For example, the American Chamber of Commerce to the European Union (AmCham EU) joined forces with the Transatlantic Business Council (made up of over 40 EU and US multinationals), the European employers’ federation BusinessEurope, and others, to create a Twitter campaign in support of TTIP’s conclusion. But with fewer than 2000 followers, it failed to rival the 15 800 followers of the Stop TTIP account (@eci_ttip). AmCham EU also tried to mobilise street protests in favour of TTIP by promoting a day of action organised by the European Liberal Youth Forum, encouraging people to “take to the streets to come out in support of TTIP and free trade”. But the tiny turnout paled in comparison to the 250 000 people that protested in Berlin in October 2015 to oppose TTIP and CETA.

Corporate interest groups’ attempts to discredit and delegitimise their critics has worrying knock-on effects. Narrowing-in on NGOs is a misrepresentation of the breadth of the opposition to these trade deals from different parts of society. Despite this, some political figures – and parts of the media – have joined in the attack, morphing it into a more general crackdown on civil society organisations.

Trade deals like TTIP, CETA and the EU-Japan agreement, are economic treaties that represent one very specific and ideological incarnation of trade policy, one that is intended to serve the interests of big business. It is the daily experiences of labour precariousness, exposure to toxic chemicals, privatisation of public services, and big business cost-cutting that prioritises profit over safety and health. People are increasingly becoming critical of the current economic system and want to have a say in how to change it. But the new trade deals threaten to lock this system in, with the only voices heard being those of trade ‘experts’ and big business.