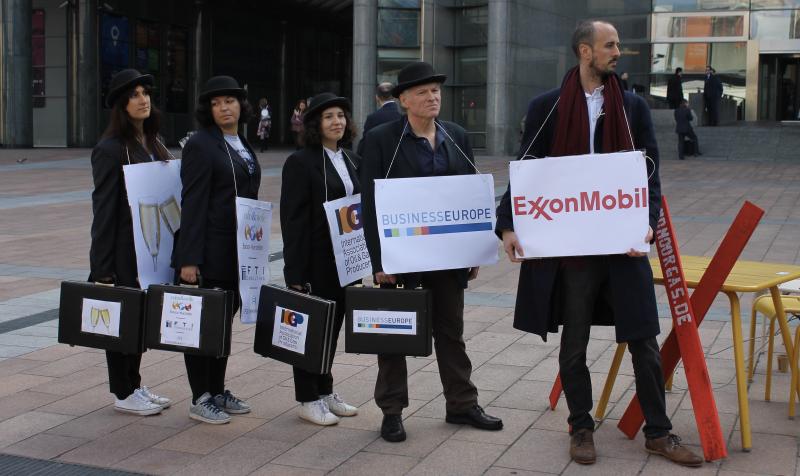 The oil and gas giant keeps its lobby badges

Weeks before the European elections, Members of the the European Parliament (MEPs) missed a golden opportunity to show the public its determination to protect EU climate policy-making from the dirty influence of Big Oil and Gas. Instead, ExxonMobil had mobilised its lobbyists to prevent the withdrawal of its lobby badges, and Parliamentarians fell in line.

Over 100 civil society groups and progressive MEPs called on the European Parliament to remove ExxonMobil's lobby badges for having misled EU decision makers and the public around climate change and having refused to attend a hearing on the matter. But behind-the-scenes lobbying and blackmail-like tactics by Exxon and oil industry association FuelsEurope have seen MEPs cave in: In the end, the company’s lobbyists were not stripped of their Parliamentary access.

On March 21 2019, the EU Parliament organised the first-ever public hearing in Europe on climate change denial and its impact, which oil and gas giant ExxonMobil refused to attend. The hearing revealed ExxonMobil as a prime example of climate change denial. Experts testifying at the event underlined that the corporation had known about the potential dangers of global warming caused by its business model since the 1960s, but instead of warning the world or taking action, spent over 30 years discrediting the scientific evidence, slandering scientists, and undermining climate policies to protect its profits.

Recent research by Corporate Europe Observatory shows that Exxon spent up to €35 million since 2010 on lobbying the EU to delay and weaken effective climate action. The US-based company, which has oil and gas fields across Europe, multiplies its lobby efforts with the help of industry associations such as FuelsEurope, as well as an army of additional for-hire lobby consultancies, PR firms and thinks tanks.

FuelsEurope, the self-proclaimed “voice of the European petroleum refining industry” is just one of six trade associations lobbying the EU institutions on ExxonMobil’s behalf, but one worth highlighting.

On 11th April, a meeting of the Conference of Presidents of the European Parliament was due to take place. The Presidents, representing the different parliamentary political groups, were due to debate whether Exxon should lose its lobbying badges for misleading the Parliament around climate change, as well as refusing to attend the subsequent hearing. Two days before, on 9th April, all Presidents received an email - seen by Corporate Europe Observatory and Food and Water Europe - from John Cooper, Director-general of FuelsEurope and its affiliated research group Concawe. 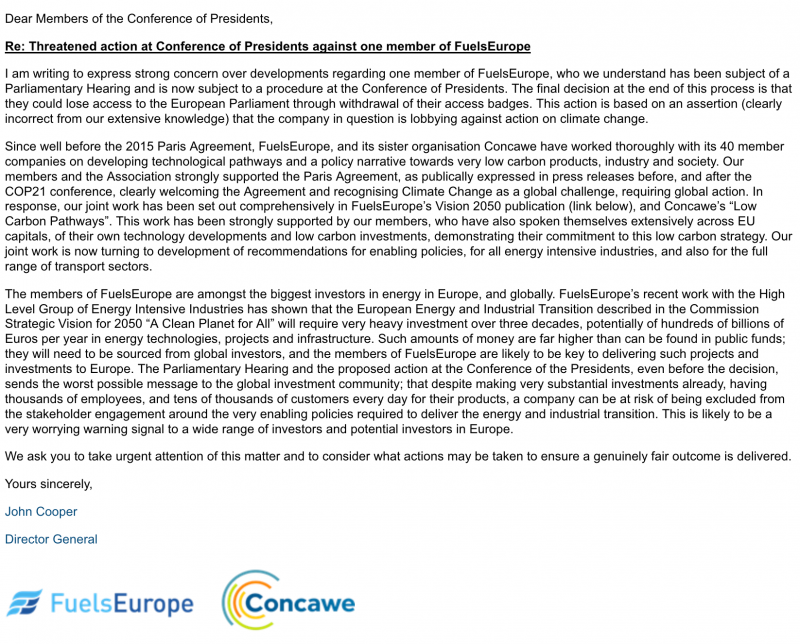 In the email, Cooper makes it clear that the European Union needs FuelsEurope and its members if it wants to pay for the foreseen clean energy transition:

“Such amounts of money are far higher than can be found in public funds; they will need to be sourced from global investors, and the members of FuelsEurope are likely to be key to delivering such projects and investments to Europe.”

The industry association then goes on to make a thinly-veiled threat, explicitly stating that revoking Exxon’s badges could lead to job losses and dry up investments by FuelsEurope members in Europe. Not something to be taken lightly by MEPs looking for re-election:

“The Parliamentary Hearing and the proposed action at the Conference of the Presidents [...] sends the worst possible message to the global investment community; that despite making very substantial investments already, having thousands of employees, and tens of thousands of customers every day for their products, a company can be at risk of being excluded from the stakeholder engagement around the very enabling policies required to deliver the energy and industrial transition. This is likely to be a very worrying warning signal to a wide range of investors and potential investors in Europe.”

This bullying strategy has over the last decade often - and successfully - been deployed by Big Oil and Gas seeking to block and weaken progressive EU climate policies.Despite clear evidence to the contrary, the rest of the letter attempts to present the fossil fuels industry as an ally in the EU’s fight against global warming:

"Our members and the Association strongly supported the Paris Agreement, as publically [sic.] expressed in press releases before, and after the COP21 conference, clearly welcoming the Agreement and recognising Climate Change as a global challenge, requiring global action.”

New InfluenceMap research published only weeks before shows that Exxon and the other four global oil and gas majors (BP, Shell, Total and Chevron) have spent $1 billion since the Paris Agreement on “misleading climate-related branding and lobbying [...] overwhelmingly in conflict with the goals of this landmark global climate accord and designed to maintain the social and legal license to operate and expand fossil fuel operations.” With the exception of Chevron, all of these companies are members of FuelsEurope. While ExxonMobil and its allies talk up their contribution to solving the climate crisis, their lobbyists promote false ‘solutions’, which distract from measures keeping fossil fuels in the ground:

From ExxonMobil with love: More post for the Parliament

On 10 April, the day after FuelsEurope had emailed all European Parliament Presidents, ExxonMobil sends its own letter. Cc’ing other high-level decision makers, it attempts to underline its commitment to the Paris Agreement and climate action, despite evidence showing it spent $100 million since the Paris Agreement on “opposing binding climate regulations and promoting fossil fuel energy policy”. 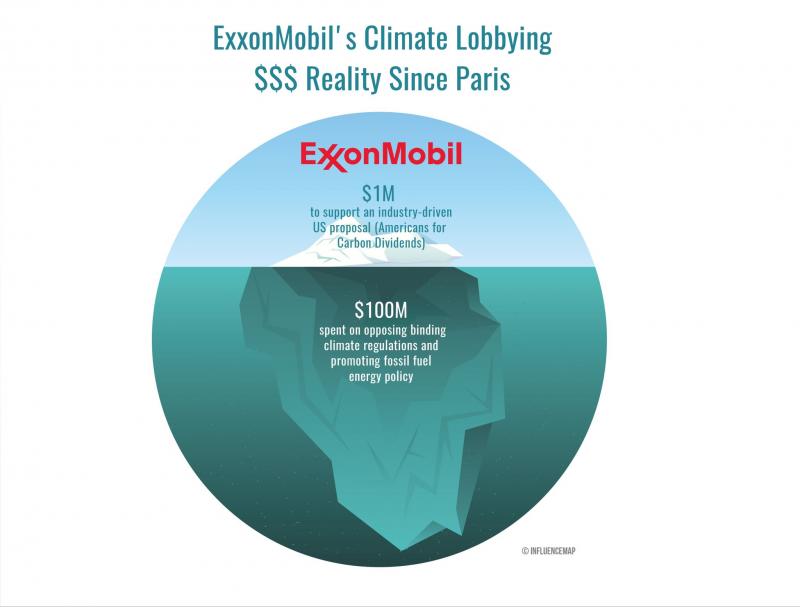 In reality, Exxon’s vision for our energy future is one swimming in fossil fuels, namely oil, coal and natural gas.

This was not the first letter on the topic sent by ExxonMobil. Before the climate denial public hearing it wrote to the chairs of the two European Parliament committees convening it, attempting to justify its refusal to attend as well as refuting claims of misleading the public.

In this second letter, ExxonMobil also attacks and tries to discredit the expert witness called to testify by Parliament, MIT and Harvard climate science historian, Dr. Geoffrey Supran. It does so by citing a non-peer-reviewed report it itself had paid for and commissioned. Yet another tried and tested tactic straight from the Big Tobacco lobby playbook. As Dr. Supran went on point out in his expert testimony, as well as his rebuttal, “Big Oil is the new Big Tobacco”.

Letters that let them off the hook

Unfortunately, the threats from ExxonMobil and FuelsEurope appear to have carried more weight with the Conference of Presidents than established facts and the voice of the public. On the same day that ExxonMobil sent its second letter, more than 100 civil society organisations wrote to the Presidents, demanding MEPs take action and strip ExxonMobil of its lobby badges.

The following morning, 11 April, the Conference of Presidents failed to recommend ExxonMobil lost its lobby badges. Had they done so, five days later the European Parliament’s ‘Quaestors’, MEPs with the power to remove lobby badges (as Monsanto found out in 2017), would have almost certainly followed the recommendation and ended ExxonMobil’s unrestricted access to the European Parliament. Instead the corporation can continue to walk the halls of power, lobbying for its own climate-wrecking business interests, misleading MEPs and the public.

With elections in May, the European Parliament lost an important opportunity to show it was not in the pocket of the fossil fuel industry, but on the side of the millions of people across Europe that have been taking to the streets. Removing ExxonMobil’s lobbying badges should have been the first step. It still enjoys privileged access to the European Commission’s climate and energy policy making processes, as well as profiting from the high levels of access enjoyed by its multiple lobby groups. The European Parliament may have fallen at the first hurdle, but it still has a chance to get up and dust itself off and begin the fight for a fossil free politics in the new Parliamentary term.