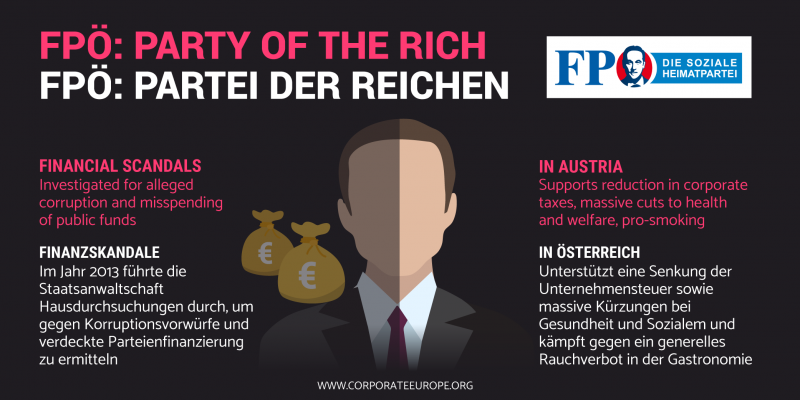 The Freiheitliche Partei Österreichs (FPÖ) is no stranger to controversy, both in terms of its funding and its big business-friendly policies. It is currently the junior partner in the coalition Government with the ÖVP (Österreichische Volkspartei, Austrian People’s Party) which itself has moved to the far right. With Sebastian Kurz as the ÖVP Chancellor of Austria, both parties have been following a neoliberal, anti-social, and anti-immigration agenda.

There have been serious questions raised about the FPÖ’s funding for years. In 2013 prosecutors conducted raids to investigate allegations of corruption and the misspending of tax-payers’ money for party political purposes when the FPÖ was in government in the Austrian state of Carinthia. Falter reports that prosecutors were especially interested in the role played by the FPÖ’s Herbert Kickl, the current Interior Minister. In May 2018 Der Standard reported that investigations into the Carinthia scandal had concluded with prosecutors due to review the findings. No public announcement on its conclusions has yet been made. Going further back in time, the 'Plastic Bag Affair' alleges that in the 1990s, while Director of the Parliamentary Club of the FPÖ, the current Justice Minister Josef Moser received a plastic bag containing five million schilling (nearly €400,000) from a major industrialist. Moser and Kickl have rejected all accusations of wrong-doing.

More recently the FPÖ is said to have developed close ties to Russia’s ruling party, including via a five-year “cooperation agreement”. Individuals from the FPÖ are reported to have attended the 2018 Yalta Economic Forum, alongside other like-minded right-wing groups, to discuss investment opportunities in Crimea, thereby undermining the EU sanctions regime against Russia. There were many raised eyebrows when the FPÖ-appointed Foreign Minister invited Russian Premier Vladimir Putin to her wedding in August 2018.

A friend of big business

The FPÖ’s logo often refers to it as the Social Homeland Party (Die Soziale Heimatspartei) and it has traditionally appeared to support social welfare, “social responsibility … and an equitable distribution of contributions and benefits for the general public”. It used to call the EU “a kind of corporate centre of globalisation madness”, campaigning against the “EU of Corporations” and criticising bankers and speculators.

But journalist Michael Bonvalot’s book entitled “FPÖ - Party of the rich” exposes how it has switched track and now promotes pro-corporate, anti-worker positions and cosies up to big business leaders, often using xenophobia to try to divide society according to origin or class. Recent FPÖ election promises have included a reduction of corporate taxes and those on property and inheritance; reduction of the public debt; and halving public administration costs, via massive health and social spending cuts.

Recent FPÖ election promises have included a reduction of corporate taxes and those on property and inheritance; reduction of the public debt; and halving public administration costs, via massive health and social spending cuts.

Now it is part of the Government, the FPÖ’s deregulatory zeal has become clear with a new law to extend the maximum working week from 48 to 60 hours, without a guarantee of overtime pay, which has brought thousands of people out onto the streets in opposition. This law is similar to the ‘slave labour law’ introduced by the Fidesz Government in Hungary at the behest of corporate interests. Speaking to a group of Austria’s biggest business interests last year, Chancellor Kurz announced further policy “gifts” to industry from the ÖVP- FPÖ Government, admitting the ideas came straight “from the Chamber of Commerce, the Federation of Industry and companies”, which have a wish-list of 489 regulations they want to see tackled.

As further evidence of its deregulatory zeal the FPÖ has also succeeded in overturning a planned smoking ban in restaurants and cafes. It was aided by former FPÖ politician Barbara Kolm who it nominated as an expert to the Health Committee of the Austrian Parliament. Kolm’s free-market thinktank the Austrian Economics Center received thousands of euros in donations from tobacco giants Japan Tobacco International and British American Tobacco in 2018. Kolm is also said to be partly responsible for the recent neoliberal shift in the FPÖ’s economic thinking. In August 2018, she was appointed by the Austrian Government to the General Council of the Austrian National Bank, and has been embroiled in a separate scandal involving overseas donations to the European Parliament’s European Conservatives and Reformists Group (ECR) political group.

The FPÖ’s national deregulatory agenda fits the pattern of voting adopted by FPÖ MEPs in the European Parliament. Our research shows that FPÖ MEPs voted against social measures such as an EU framework on health and safety at work; a proposal for a directive on ‘decent work’; a pan-EU 25 per cent corporate tax rate; a three per cent digital services tax; and support for worker protection against chemicals. It also opposes action to tackle climate change, being classed as a climate-sceptic party by Adelphi, opposing the Paris Agreement, and voting against all climate policy proposals analysed by Adelphi. This includes opposing the abolition of fossil fuel subsidies.

Perhaps this position is due to the FPÖ’s “strong ties” with the “steel, automotive and fossil fuel industry”.

Perhaps this position is due to the FPÖ’s “strong ties” with the “steel, automotive and fossil fuel industry”. Bonvalot argues that key players in drawing up the FPÖ’s economic programme have links to Austrian industrial interests. Manfred Haimbuchner is the FPÖ’s Deputy Governor of Upper Austria, a heavy industrial region including steel-manufacturer Voestalpine, and numerous factories, including BMW. Haimbuchner is considered to help network the FPÖ with the Industriellenvereinigung, the Federation of Austrian Industry. Another useful link is Austrian MP Axel Kassegger, an entrepreneur and economic spokesman for the party. Meanwhile, Bloomberg reports that FPÖ minister Norbert Hofer is among several far-right EU politicians pushing to strengthen ties with China.

The FPÖ took a contradictory - even hypocritical position - on the ratification of the controversial EU-Canada trade deal (CETA). Its MEPs opposed CETA in the European Parliament, talking about the interests of Austrian consumers and small farmers, and demanding a referendum on CETA, so as to stand up to overseas multinationals. The party went to the polls in late 2017 on a platform which firmly opposed CETA, yet immediately after the election it voted to ratify CETA, apparently in order to secure its position as the junior party in the new government. Only one EU member state was needed to veto CETA to stop it in its tracks, but the FPÖ instead decided to prioritise its own party political advantage.

Barbara Kappel, an FPÖ MEP, has declared four overseas paid trips including two to Malaysia in February 2017 and May 2016 to cosy up to the palm oil industry (which is implicated in major deforestation across South East Asia). Perhaps most controversially Kappel was recently implicitly criticised by the European Parliament for planning to visit Moldova as an unofficial election observer, despite her links to a Moldovan businessman convicted of major bank fraud. Kappel told Politico that she was in Moldova “for an individual unofficial election observation with an independent NGO”.

The FPÖ is a controversial party, implicated in scandal, close to big business interests, and open to claims of hypocrisy. Its position in the Government is deeply worrying, providing it with a platform to implement its anti-immigrant, deregulatory, reactionary policies.