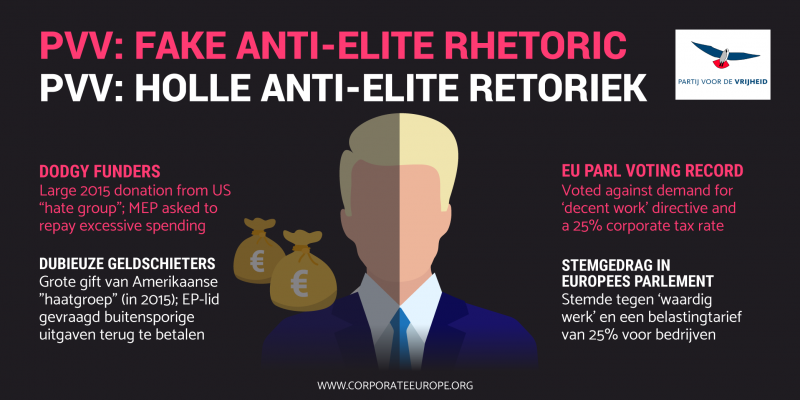 As a symbol of how toxic the anti-migrant, anti-Islam agenda of the Dutch Party for Freedom (PVV) is, in the 2017 national elections, all other political parties vowed not to go into coalition with it and its leader Geert Wilders.

The Dutch register of party financing shows that in 2015-16 the PVV (via its foundation, the Stichting Vrienden van de PVV) received over €130,000 in donations from a right-wing US foundation called the David Horowitz Freedom Center, called a “hate group” by far-right watchdog the Southern Poverty Law Centre.

the PVV received over €130,000 in donations from a right-wing US foundation called the David Horowitz Freedom Center, called a “hate group” by far-right watchdog the Southern Poverty Law Centre

The Horowitz Center made the largest individual donation to any Dutch political party in 2015, although overseas donations to the PVV have since dropped off. But the PVV is in the sights of Steve Bannon, Donald Trump’s former adviser, who now has the aspiration to set up a pan-European ‘movement’ of extreme right political parties (see Box 4). The PVV is one of the few parties to have fully endorsed the project.

Of the 14 European Parliament votes analysed, our research shows that PVV MEPs had the worst record of all parties studied, opposing 13 of the votes, including those on health and safety at work; a proposed directive on ‘decent work’; a new EU authority on tax evasion; a 25 per cent pan-EU corporate tax rate; and action to protect workers from chemicals. The Adelphi report places the PVV in the climate denial camp, in line with its opposition to all the climate votes they studied.

Of the 14 European Parliament votes analysed, our research shows that PVV MEPs had the worst record of all parties studied

Speaking about the Paris climate declaration, PVV leader in the European Parliament Marcel de Graaff said: “The elite are laughing here while rubbing their hands. They will benefit from these climate action plans. But the hard-working citizens in the Member States will pay for their electricity, their car, their heating.” This is typical of the way that the PVV tries to ally itself with the citizens against the ‘elite’, but the antics of its four MEPs indicate that this is a false image.

Olaf Stuger MEP was formerly a lobbyist at consultancy Smeets, Stuger & De Vries, where he apparently lobbied for the Malaysian forestry industry. Before that he was at the major lobby firm Weber Shandwick. He also co-founded Bond voor Belastingbetalers, a pressure group critical of taxation. Earlier this year Stuger praised Hungarian Prime Minister Viktor Orbán, saying he “should be given a statue for defending the borders and the security of his own people.”

In May 2018, PVV MEP Auke Zijlstra was accused of spending excessive amounts of public money on gifts, including €5000 on 150 leather binders, with auditors describing the purchases as “an excessive amount”. Zijlstra was asked to pay the money back. MEP André Elissen declared that he earned up to €1000 a month via the “Elissen Consultancy”. After questioning by Corporate Europe Observatory in April 2019, Elissen’s office said that this was inaccurate and no payments were received but that “due to the busy agenda, we still haven't been able to change this declaration”, which was submitted in August 2017! Meanwhile MEP Marcel de Graaff, formerly a well-paid manager with Dutch telecoms giant KPN was the focus of a complaint sent by 50 MEPs, about his “hate speech” against Muslims during a plenary debate.

Like so many of its fellow authoritarian parties, the PVV’s anti-elite rhetoric is at odds with its acceptance of donations from rich overseas donors, and the voting patterns and reputations of its MEPs.