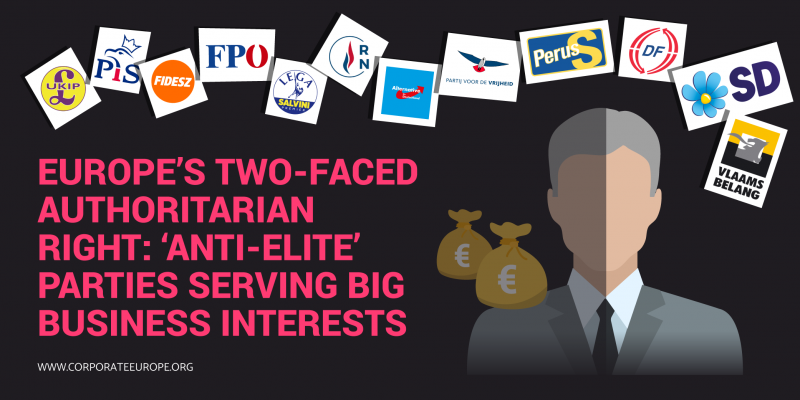 The European Parliamentary voting record of these far-right parties, from Sweden, Finland, and Belgium, on the 14 votes analysed, indicate how far removed they are from the interests of citizens and those they purport to support.

The Sweden Democrats (Sverigedemokraterna) has historical links to fascism and white nationalism and its website says that it seeks “a balance between the social partners, security in times of unemployment, improved conditions for small and medium-sized companies, secure workplaces”. Unlike many of the other parties profiled here, it does not seem to prioritise outreach to working class communities, but it does offer to “strengthen the protection of a good working environment for everyone who works in Sweden”. Yet Sverigedemokraterna’s two MEPs voted against: proposals for paid paternity leave; boosting health and safety at work; action to promote work-life balance; protection for workers from dangerous chemicals; and taxing robots to fund retraining. The MEPs additionally opposed a pan-EU 25 per cent corporate tax rate and action on tax evasion, which is in line with its promise to “reduce companies’ regulatory burden”.

The party said that Sweden “should reduce its oil dependency and its greenhouse gas emissions.” But according to our research, its MEPs voted against the phase out of fossil fuel subsidies and boosting environmental justice. The Adelphi study puts Sverigedemokraterna in the ‘denialist/ sceptical’ camp when it comes to climate change. The Financial Times reported that in the run up to the national election held in 2018, Sverigedemokraterna tried to “woo business leaders”, although the party’s call for a referendum on EU membership apparently put them off. This was seemingly contradicted by a post-election report which quoted several business leaders calling for a coalition government to include this anti-immigrant party.

The Finns party (Perussuomalaiset) has a platform which calls for “equality of opportunity for all” and “an equitable and defendable distribution of wealth”. It talks about “openness and transparency in matters of public decision-making” and being “an active participant in eliminating corruption internationally”. And yet at the European level, according to our research, Perussuomalaiset’s two MEPs have taken a somewhat contradictory approach, opposing the creation of a European tax evasion authority; and voting against equality and social rights policies such as paid paternity leave; health and safety at work; action to promote decent work. While its party platform talks about business “responsibility towards both the individual and community”, its MEPs opposed a pan-EU 25 per cent corporate taxation rate and a three per cent digital services tax. Its MEPs also voted against the phase out of fossil fuel subsidies, even though the party is said to recognise the reality of climate change. Jussi Halla-aho, the MEP and leader of the party, has a criminal conviction after he made offensive comments about Islam.

US political fixer Steve Bannon, hoping to create a new far-right ‘movement’, has called Sverigedemokraterna and Perussuomalaiset “perfect casting” to join his project, although they are yet to accept the offer.

US political fixer Steve Bannon (see Box 4), hoping to create a new far-right ‘movement’, has called Sverigedemokraterna and Perussuomalaiset “perfect casting” to join his project, although they are yet to accept the offer.

The Belgian political party Flemish Interest (Vlaams Belang) was set up in 2004 after its predecessor (Vlaams Blok) was sentenced in court for racism. Like many other parties in this report, it has since attempted to re-brand itself as less extreme, but it remains happy to use anti-immigrant and anti-semitic rhetoric. In 2014 just one MEP Gerold Anemmans was elected to the European Parliament. According to our research Anemmans voted against action to boost work-life balance and a proposal for a directive on ‘decent work’. He also opposed several measures to stop tax evasion (country by country reporting of profits for multinationals, and a pan-EU corporate tax rate of 25 per cent). Vlaams Belang’s track record on climate is no better: the Adelphi report found that Annemans voted against, or abstained on, the majority of the proposals studied to tackle climate change. CAN Europe labelled his party a climate dinosaur.