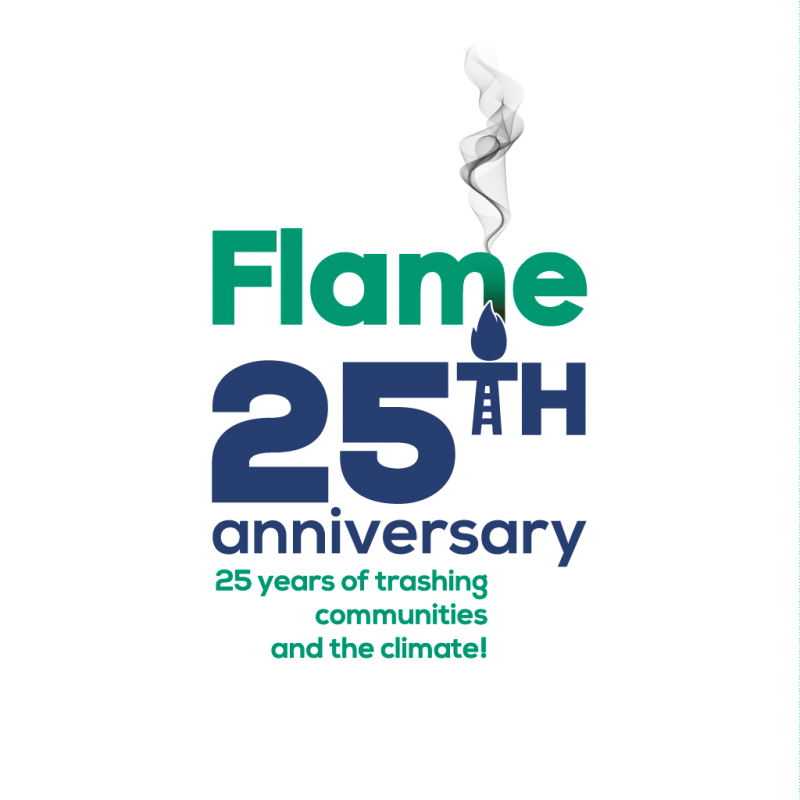 25 years of trashing communities and the climate!

**Download the CEO and Gastivists factsheet on the Flame Conference 2019, available as a beautiful online PDF, or in a print version**

What: 25th edition of the Flame Gas & LNG Conference

The Flame conference in Amsterdam will be opening its doors for the 25th time to the gas industry’s biggest climate criminals. The likes of Shell, BP, Anadarko, RWE, ExxonMobil and Fluxys will be in town for three days to lobby decision makers and secure more gas deals, keeping us hooked on dirty fossil fuels while trashing communities and the climate. Ooh, and don’t forget the cocktail parties!

Climate criminals with cash to spare (all of them!) can raise their profiles at the conference by:

Flame offers a discount package for under-35s to “introduce your high achievers to the Flame community”. ‘Bright Sparks’ includes networking, media training and breakfast with Jason Tate, CEO of European Gas & Power for BP. Find out what the typical day of a gas executive looks like, and why not ask how they manage to sleep at night?

Shell and the Dutch gas addiction

It’s no accident that Flame takes place in the Netherlands, a country whose wealth is linked to gas extraction by Royal Dutch Shell.

Discovered in 1959, the Groningen gas field in the north of the Netherlands is the largest in Europe. Operated by NAM, a joint venture between Shell and ExxonMobil, it supplies local homes as well as neighbouring countries. Years of community protest due to the resulting earthquakes and damaged houses finally forced the Dutch government to announce a production stop in 2030. Yet NAM continues to insist that “the Netherlands needs oil and gas, now and in the future.”1

See you in court, Shell

Like ExxonMobil in the US, Shell is being sued for misleading the public about climate change despite knowing the truth since the 1960s.2 Dutch organisations and 500 co-plaintiffs have taken the company to court on behalf of more than 30,000 people from 70 countries.3 40,000 Nigerian villagers are also taking Shell to the UK’s Supreme Court for refusing to clean up the oil pollution that has destroyed their land and waters.4 Court cases are quickly piling up for the oil and gas giant, which is also on trial in Italy (together with ENI) and likely soon in the Netherlands over alleged corruption in its Nigerian oil deals.5

Despite the mounting court cases, the Dutch government continues to lend a hand to Shell’s criminal oil and gas extraction activities. Recently released documents show that the Dutch embassy in Mozambique was instrumental in helping Shell to win a public tender for the construction of a $5 billion gas-to-liquids plant in the country.6

Gas as a false solution

The extraction and transport of both conventional and unconventional (‘fracked’) gas has severe social, environmental and climate impacts all along the supply chain:

Shipping fossil gas around the world

Flame’s Global LNG Summit on 13 May gives a platform to some of the world’s worst climate criminals – including Italian Eni, French Total, US Anadarko, Dutch Gasunie and Belgian Fluxys – all of which are trying to expand the use of ‘liquified’ natural gas (LNG).

What is LNG?
Fossil gas, cooled until it becomes liquid, can be loaded into tankers and shipped across the ocean. The US sends its fracked gas around the world thanks to LNG, while Russia ships gas from the Arctic to Europe. Rather than moving away from fossil gas, industry is trying to create an even bigger market with LNG.

The LNG terminal that Anadarko is attempting to build on the northern coast of Mozambique will displace communities and destroy homes and livelihoods.8 The government backs the $20 billion project, although only a fraction of the revenues are predicted to stay in the country and the promise of jobs has not materialised.9 Despite widespread signs of corruption and malfeasance, the project is also supported by numerous export credit agencies.10 Oil giants ExxonMobil, Shell and Eni are also planning to build LNG facilities here so they can exploit the Rovuma Basin gas discoveries.11

The EU gives political and financial support to numerous LNG projects by awarding them the status of ‘Projects of Common Interest’. In Croatia, local communities are fighting one such scheme, a proposed floating LNG terminal off the island of Krk. As there are no buyers for the gas,12 this is yet another useless, publicly-funded mega project (like the 28 other EU terminals that have been used at 23% of their total capacity since 2012).13 Although the EU claims that Krk in particular and LNG in general will reduce reliance on Russian gas, Russia became the EU’s biggest LNG supplier in February.

The EU is also promoting numerous new gas pipelines under the guise of common interest, including the controversial Trans Adriatic Pipeline (TAP) that would bring Azeri gas to Italy. Fluxys, a Belgian gas transporter and owner of two LNG terminals, is a major shareholder and key lobbyist for TAP in Brussels. Instead of keeping fossil fuels in the ground and moving away from gas, the European Commission is positioned to play a major role in gas well into the future.

Join the fight against gas and corporate impunity! Get in touch with Corporate Europe Observatory and the Gastivists for more information. Let’s make sure there’s no Flame Conference #26!

12Calculation of Andy Gheorghiu, Policy Advisor for Food & Water Europe, based on numbers by https://alsi.gie.eu/#/