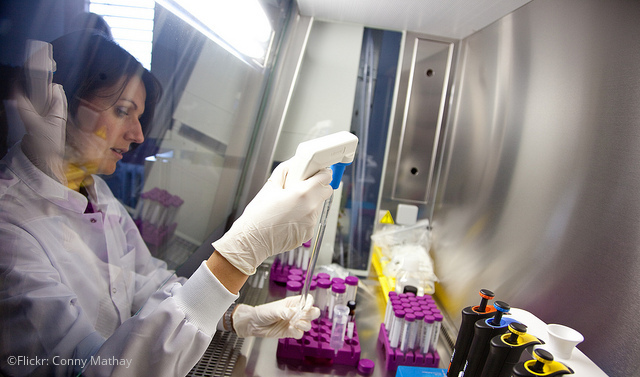 US pressure on EU to de-regulate new GM

One year after a landmark ECJ judgment that the EU’s GMO rules should apply to new genetic engineering techniques, industry groups and the US Government are keeping up pressure on the European Union to deregulate, with implications for food and bio-safety, as well as consumer choice.

On 25 July 2018 a key ruling was published by the European Court of Justice (ECJ) which left no space for interpretation: existing GMO regulations must be applied to all products produced from new techniques of genetic engineering like CRISPR-Cas. Such techniques - often referred to by developers as ‘gene-editing’ or ‘new breeding techniques’ - have emerged since Europe’s GMO law was introduced in 2001, and are currently being applied by developers to food crops, trees, farm animals and insects. Dozens of patents have already been filed in this field by the big agrochemical corporations like Bayer, BASF, Dow Agrosciences and Monsanto.

Industry lobby groups have waged a lobby campaign for over a decade to avoid these regulations for their new generation of GM technology. Infuriated by the ECJ ruling, they called upon the new Commission to re-open the EU GMO regulations. Their aim – to get products from these new techniques exempted from EU rules – would mean that new GMO products would not be tested, monitored or labelled. The US Government, too, jumped on the bandwagon to push the EU to follow the US approach, which would mean nearly complete deregulation of new GM products.

Immediately after the ruling the US Secretary of Agriculture Sonny Perdue called it a “setback” that was “unjustifiably stigmatizing new technologies”. He described the EU’s rules on GMO “regressive and outdated”, and advised Europe to seek input from its trading partners on how to implement the ruling. Perdue added, “USDA [US Department of Agriculture] will re-double its efforts to work with partners globally towards science- and risk-based regulatory approaches.” However, in the US most GMOs do not undergo any evaluation to speak of.

Indeed, on 5 September 2018 EU Health Commissioner Vytenis Andriukaitis met with US Under Secretary of Agriculture for Trade and Foreign Policy Affairs, Ted McKinney. McKinney expressed the US’ “frustration” with the ECJ ruling which according to him “hammered the US and other third countries as trading partners”.

According to the minutes of this meeting, obtained by Corporate Europe Observatory, McKinney said that the EU “is now expected to better reflect on the impact of the ruling and realise that EU legislation needs to change”. He also offered the EU help from the US in that direction.

McKinney also claimed that the US Government had reassured two European biotech companies that allegedly had plans to relocate to the US, by saying they were confident that the EU would “realise” that it would have to change its GMO rules.

Bringing down rules on biotechnology products in other political blocks or countries is a key focus for the US in international trade talks. When the new NAFTA agreement between the US, Mexico, and Canada, concluded in October 2018, includes a new chapter on agricultural biotechnology. Politico commented that experts view this as a “major step in America’s effort to export its biotech model around the world”. According to the American Seed Trade Association, this “sends a clear message to other US trading partners, like the European Union and China, which have been criticized for having an unpredictable regulatory approach”.

The European animal feed lobby group FEFAC, with a great stake in GM soy trade with the US, told FeedNavigator that the ECJ ruling could prove to be “a non-tariff trade barrier”, effectively “blocking EU market access to imports of US soy and other feed grains”.

This is not the first time the US Government has got involved. In 2016, Corporate Europe Observatory, GeneWatch, and Greenpeace revealed how the European Commission had shelved a legal opinion that at least one new genetic engineering technique would have to undergo the usual safety testing and labelling, following intense lobbying by the US government.

In advance of a meeting with DG SANTE on 7 October 2015, the US Mission to the EU said “it came to their attention” that the Commission’s legal opinion was going to classify one particular gene-editing technique “as a GM technique”. The US mission warned DG SANTE that this would be “another blow to agriculture and technology”. This suggested that the US Mission had access to very sensitive political intelligence regarding the Commission’s thinking on the regulation of new techniques.

US embassies as lobby vehicles

Investigations by the organisation Food & Water Watch (US) have revealed that in the past decade, the United States has aggressively pursued foreign policies in food and agriculture that benefit the largest seed companies. Examining five years of US State Department diplomatic cables, FWW found evidence that US embassies and consulates in Argentina, Germany, Slovakia, Spain, Egypt, and South Africa all promoted biotech products or positions in those countries, and an “advocacy toolkit for diplomatic posts” was sent around to instruct US embassy staff in this respect.

The US government is also targeting European media. This became evident at a major event on new GMO techniques hosted by Wageningen University and organised by the Keystone Policy Center, CRISPRcon 2019.

Media outlets confirmed to Corporate Europe Observatory that US embassies and the US Department of Agriculture at the US Mission to the EU in Brussels were “recruiting” journalists from as many EU member states as possible to participate in the event, offering to pay all costs, including their flights, accommodation and food.

Moreover, a special seminar was organised for them the day before the conference to “train journalists who are not usually covering these issues”. This so-called Plant Breeding Seminar, not featured on the CRISPRcon website, was organised by the US Government’s Foreign Agriculture Service (FAS) in cooperation with Wageningen University. At least a dozen journalists from around the EU attended the seminar.

The event page presents CRISPRcon as “a unique forum in which a broad selection of diverse voices come together to discuss the future of CRISPR”. However only a handful of speakers with a critical opinion were invited, which was why some of them called it “a cleverly choreographed greenwashing rally”.

The event’s sponsors included agribusiness giants Bayer and Corteva, the Biotechnology Industry Organization (US), and the United Soybean Board (US).

Why new GMOs need to be regulated
The European Commission is under massive pressure from the biotech industry plus the US and other trading partners, to re-open the EU GMO laws in order to get the new gene editing techniques like CRISPR-Cas exempted from those rules. In other words, new GMO products would not get tested, monitored, or labelled, to the detriment of the environment, food safety, and consumer information. This lobby campaign has been ongoing for over a decade, but has strongly intensified since the ECJ ruling.

Farmers and environmental groups published a joint position, calling for the EU GMO rules to be applied to new GMOs. The European Network of Scientists for Social and Environmental Responsibility (ENSSER) has published a statement explaining why products from new GM techniques like gene editing need to remain regulated from a biosafety point of view. The Transatlantic Consumer Dialogue adopted a resolution stating that risks must be assessed and products must also be labelled in accordance with consumers’ rights to know.

The corporate lobby groups wrote in a position statement that it is their goal “to obtain practical and science-based rules” for new GMOs; however their concrete proposal is that there should be no rules at all for “products that could have been obtained” through old mutagenesis techniques by radiation or chemicals, or in nature. They added that “this position is also increasingly adopted as a principal regulatory approach in a growing number of countries around the world.”

However, as explained in the ENSSER statement, there are risks and uncertainties associated with each of the new GM techniques, some of which are common to all. Given that many of the techniques are new, it is not yet possible to fully evaluate the potential for adverse effects. As yet, there has been no or little assessment of the biosafety implications of combining the techniques.

GMO varieties so far brought to market in the EU are very unpopular among public and politicians alike. Nineteen member states have made use of their right to block GM cultivation on their territory, and large cross-party majorities in the European Parliament have voted objections to each and every GM authorisation (36 in total, both import and cultivation authorisations) proposed by the Commission.

Farmers and NGOs recently called on the new Commission to ensure the existing GMO regulations are properly implemented, in line with the ECJ ruling. Europe should not give in to US pressure, but should protect the environment, farming and consumers. In a time of severe environmental crises, EU decisions should be focused on fixing our food and agriculture system, leaving monoculture-style farming, driven by corporate interests, behind.