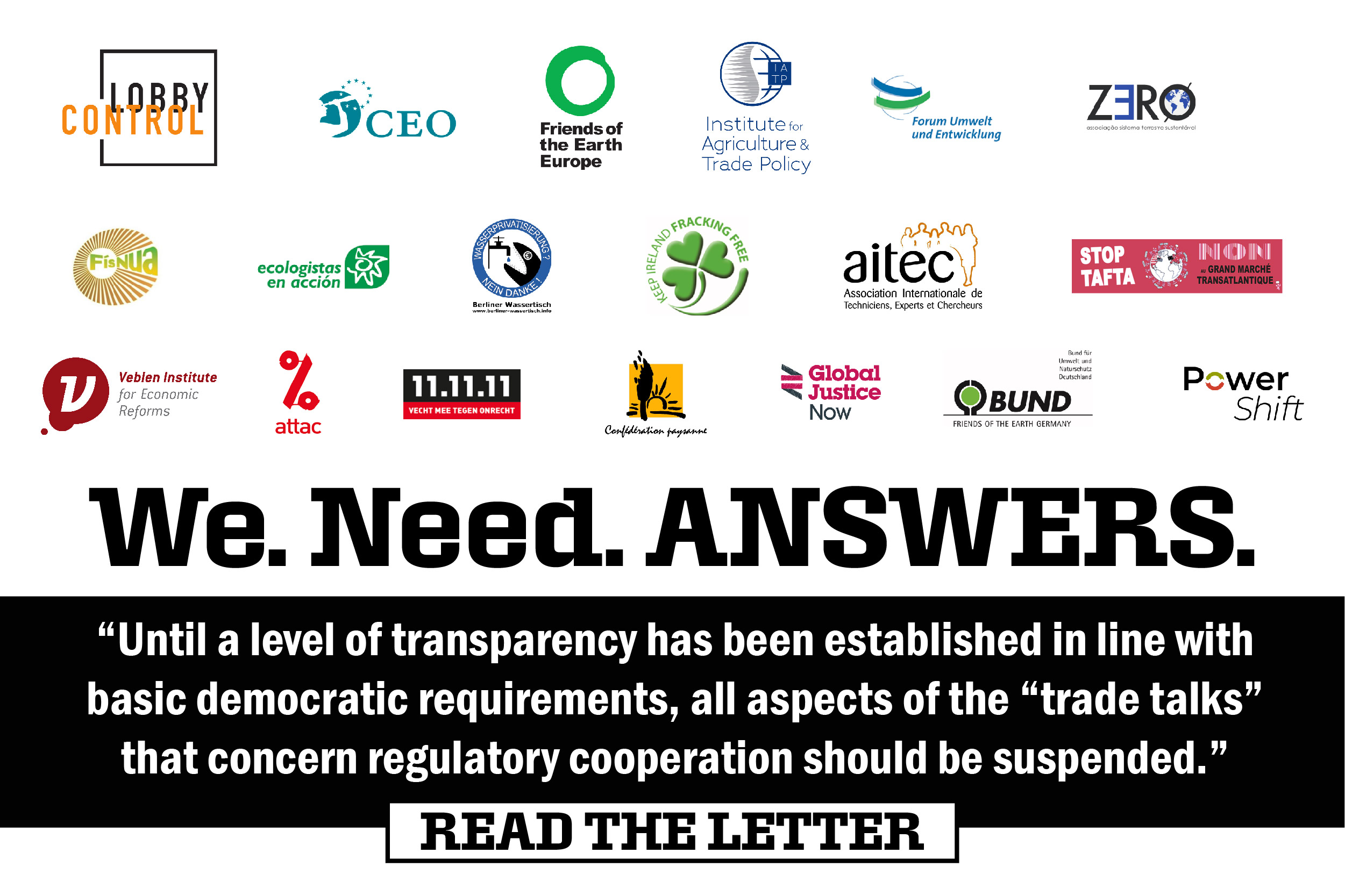 Open letter to the Commission

European civil society organizations denounce lack of transparency and the inclusion of “regulatory cooperation” in the ongoing EU-US trade talks in a letter to the Commission.

We hereby express our deep concerns regarding the lack of transparency in the ongoing EU-US trade negotiation, in particular on the subject of regulatory cooperation.

Promises made by the Juncker Commission to increase transparency

Five years ago, when the new Commission took office, a commitment to increased transparency in trade negotiations was high up on the agenda. The Commission also announced comprehensive measures to ensure that this commitment was followed through. President Juncker at the time declared his intention to “earn the support and trust of the citizens” and that the Commission “considers it vital to ensure that the general public has accurate and full information of the EU’s intentions in the negotiations [with the US]”.

On the same matter, Trade Commissioner Malmström added that the Trade Commission would publish “summaries and explanations about our objectives in the negotiations in clear, non-legal language” and that the only change to her policy “will be more openness, not less”. This was a response to the critique that we, along with many other civil society organizations, offered on the opacity and vast scope of the TTIP negotiations. As a result, Commissioner Malmström announced that her “Trade for all” initiative would effectively target the lack of transparency and civil-society participation in trade policy, and promised to address concerns raised by NGOs about certain provisions.

No lessons learned from TTIP

One of our main points of critique related to the planned provision on regulatory cooperation. This mechanism poses a direct threat to existing levels of consumer, worker and environmental protection as well as to democratic decision making. In view of the former Commission leaving office, we have to conclude that those objectives were not met, and that whatever changes have been made are not sufficient to ensure public oversight and democratic control of the renewed negotiations with the US. Based on the proposal of the Trade Commission, the Council of the European Union granted two specific negotiating mandates, one on the elimination of industrial tariffs and one on conformity assessment.

Although the latter contains only the very mildest form of regulatory cooperation, the dangers implicit can be considerable, as our findings suggest. Moreover, it is impossible for the public to make an accurate assessment of what is actually at stake in the EU-US trade talks, because the Commission has asked the Council to waive the obligation to conduct an ‘impact assessment’ of the mandate. Also, the Commission has not published any documents explaining the implications for particular sectors, nor has it published dates or reports for the individual negotiation rounds. This is a departure from the course taken in the TTIP negotiations during which documents were published that provided at least for some degree of public oversight.

What we find the most worrying is that the Commission seems to negotiate beyond the competences as set out by the mandates. Those mandates are supposed to allow governments, parliamentarians and the public to understand what the talks can legitimately cover – and especially what they cannot.
It was therefore with much surprise that we witnessed the Commission make reference to increased efforts on “voluntary regulatory cooperation”. Surprise turned into concern when on July 9th, during a Stakeholder Consultation on the topic, DG Trade’s own Mr Hiddo Houben declared the importance of a proper “transatlantic agenda on regulatory cooperation”. When we asked Mr Houben under which mandate the commissioner was including regulatory cooperation in the trade talks with the US, he referred to the provisions of the Agreement on mutual recognition (MRA) between the European Community and the United States of America, which entered into force on February 2nd 1999. This was confirmed by a document from DG Trade to the EP Trade Committee, which reveals that the DG has a more ambitious agenda for the negotiations than the topics covered in the two mandates.

Now we see the Commission using the EU-US MRA to broaden the scope of the negotiation, without a formal approval by the Council or any debate on the issue in the European Parliament. Business groups, on the other hand, were asked to chip in via a formal consultation launched by the Commission, which covers not only the mandated negotiations on conformity assessments, but “input on concrete initiatives for regulatory cooperation in sectors with the potential of facilitating bilateral trade” as well as “on areas where no standards exist yet”.

In the light of this evidence and in line with the Commission’s very own transparency agenda, we call on the Trade Commissioner

Until these demands are met, and a level of transparency has been established in line with basic democratic requirements, all aspects of the “trade talks” that concern regulatory cooperation should be suspended.

We hope that you will address these concerns and provide for actual transparency in the trade talks that the Commission is conducting on behalf of European citizens, and would welcome the opportunity to discuss the issue at stake in further detail.