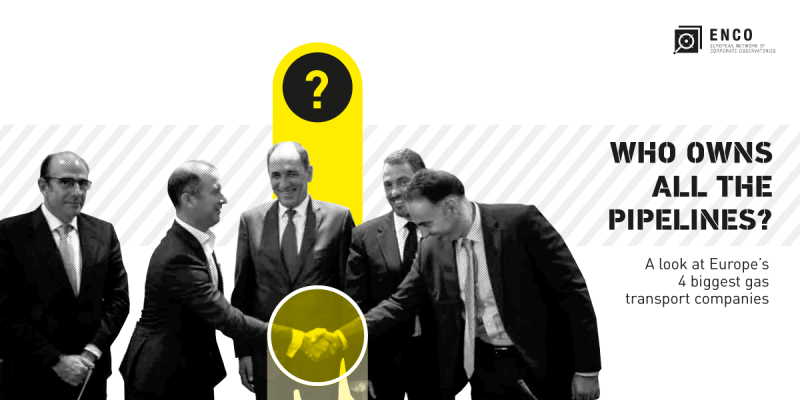 Europe’s four biggest gas transport companies own half the EU’s LNG terminals and enough pipeline to stretch around the world two and a half times. A new briefing by the European Network of Corporate Observatories reveals that their lobby influence has secured EU support for yet more lucrative infrastructure projects to expand an already under-used gas network. In the midst of the climate crisis, the political influence of Enagás, Fluxys, GRTgaz, and Snam is anchoring fossil gas deep in the EU energy system.

Although nominally publicly-controlled, they are run like private companies and their shareholders include major financial investment funds like BlackRock, who are keen to see steady returns. The four companies collectively made more than €2 billion in profit in 2018 with almost three quarters paid out in dividends.

The drive for more gas infrastructure is reflected in their EU lobbying: uncovering the lobby spending, meetings, and connections of the four gas infrastructure giants, the briefing (alongside a map) sheds light on the hefty influence of an often-overlooked group of corporations over EU energy and investment policies.

On a day when EU Climate Commissioner Miguel Arias Cañete gives the keynote speech at an event co-organised by Brussels’ biggest gas lobby group GasNaturally, the new briefing questions the wisdom of giving the gas industry such privileged access to decision-makers.

“These gas companies have been leveraging their financial and political firepower to make sure the EU invests ever more public money into new construction projects in the sector, although such long-term investment only serves to stall the energy transition – and secure more profits for the fossil fuel industry in the middle of the climate crisis.”

“With their lobbying firepower, these companies have helped to build the narrative of gas as a ‘transition fuel’, co-opting the political discussions and decision making around the urgently needed energy transition in Europe for their own business interests.

“This misleading fairy tale has cost us much valuable time and risks to waste even more public money when we are facing a climate emergency that is about to spiral out of control”.