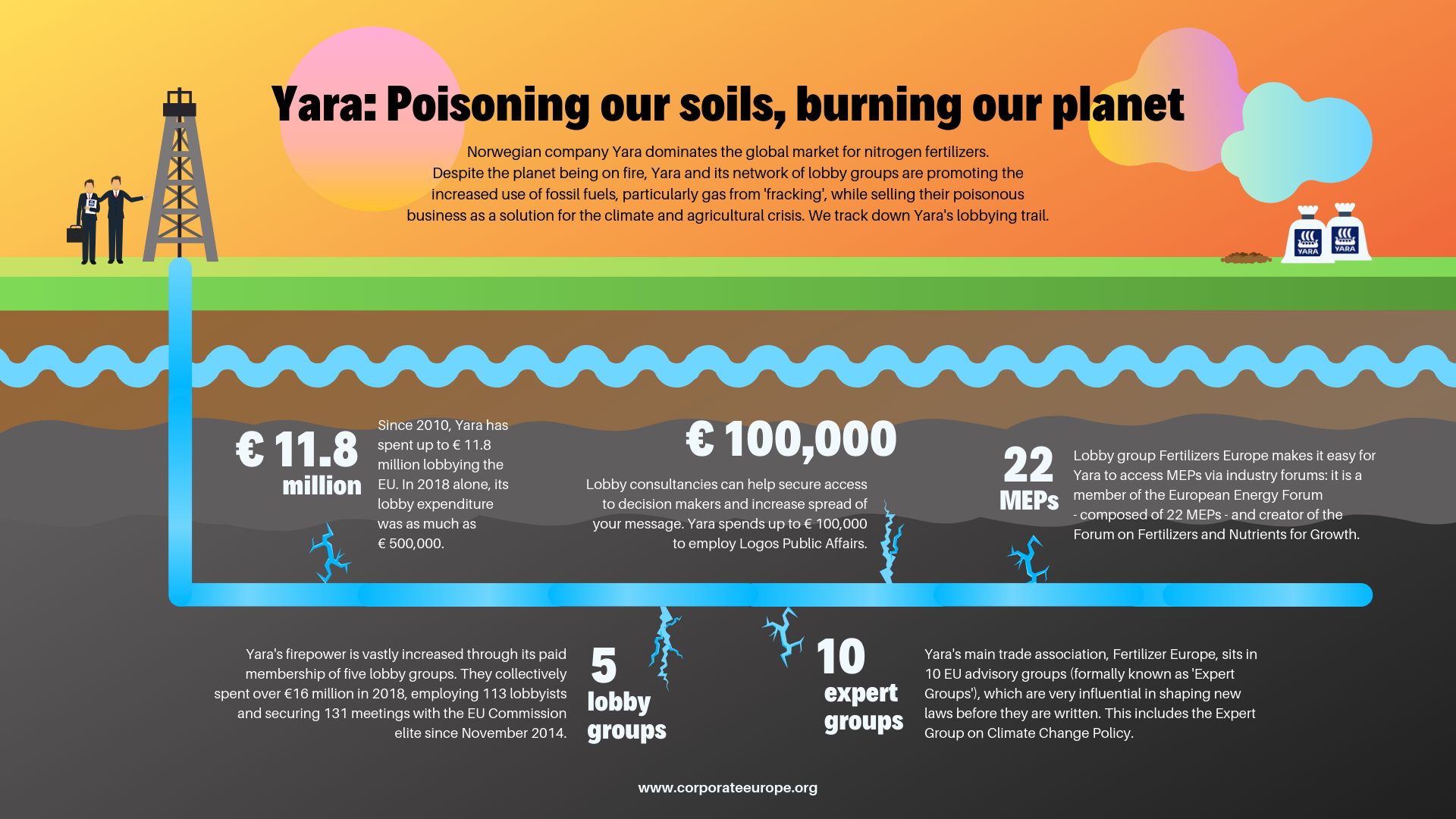 A profile of EU lobbying by the Norwegian fertilizer company

Our planet is on fire, and global greenhouse gas emissions continue to increase. However, the resistance is also growing. From 19-25 September, activists will gather at the Free the Soil mass action in Germany in order to tackle one of the drivers of the climate breakdown: industrial agriculture. Norwegian fertilizer giant Yara, which dominates the global market for nitrogen fertilizer, will be in the spotlight.

Fertilizer companies like Yara have been dubbed the Exxons of agriculture. Not only are their products the largest source of emissions from agriculture and a major cause of organic matter depletion in soils, but with so-called ‘natural’ gas as their main raw material they are a major consumer of fossil fuels. Despite a crafty greenwash strategy promoting itself as part of the solution to the climate crisis, Yara has been the largest buyer of fossil gas in Europe for years.

The company’s lobbying activities are directed towards increasing the use of fertilizers and ensuring a cheap and stable fossil gas supply by pushing for fracked gas, which has severe impacts on local communities and the environment. Yara also lobbies successfully at the international level for the expansion of the use of fertilizers in the Global South as part of what they call ‘climate smart agriculture’. This approach has a devastating effect on the livelihoods of farmers around the world, as well as on the soil, water and climate.

This article looks at the many channels of influence used by Yara and its lobby network, specifically in the European Union (EU). For information on lobbying at the international level, see previous work by CEO. For an overview of Yara, see the in-depth profile from Corporate Watch.

A snapshot of Yara’s EU lobbying

In terms of personnel, Yara declared three lobbyists in 2018 (one accredited with a permanent access pass to the European Parliament) but zero meetings with the European Commission’s top politicians. However, this does not include meetings with lower-level civil servants, as only those with Commissioners, their cabinets and Directors-General have been publicly disclosed since November 2014.

Don’t be fooled, the modest number of lobbyists and declared meetings with the Commission does not mean that Yara refrains from lobbying; the company also makes use of other channels of influence. Their firepower is vastly increased through their paid membership in trade associations and other lobby groups that are actively advancing corporate interests in Brussels.

Yara listed their membership of five lobby groups in 2018, although it is also a member of others that are not listed (see below). The five disclosed are:

The total lobby expenditures declared in 2018 by the three registered groups amounts to over €16 million a year, with a total of 113 lobbyists working for them and a total of 131 meetings with the Commission elite since November 2014. SidenoteThe exact amount is €16,664,491. Of course, groups like CEFIC lobby on other issues beyond fertilizers, but the data they provide makes it impossible to disaggregate spending on fertilizer issues compared to other topics. The list of meetings refers to those held since November 2014 with Commissioners, their cabinet members or Directors General at the European Commission (from information published by the Commission). However, this number doesn’t include the myriad of informal get-togethers and formal meetings with lower-rank officials that carry a big weight in policy making, as the European Commission does not publish information on those. This network helps Yara to broadcast its messages through more channels, and powerful ones at that.

Fertilizers Europe, for instance, currently holds the presidency of the Agri-Food Chain Coalition, a lobby group that unites most of the agribusiness industries (fertilizers, pesticides, machinery, seeds, big farmers, commodity traders, food multinationals, supermarkets, etc.). This network helps these industries to defend the current destructive industrial agriculture model in the EU, which they all benefit from.

CEFIC, the lobby group for the European chemical industry, and its members are keen advocates of both fracking in Europe and importing fracked gas from the US. During the failed EU-US free trade talks from 2013-2106, SidenoteAttempts are currently being made to revive these Transatlantic Trade and Investment Partnership (TTIP) talks. See https://corporateeurope.org/en/international-trade/2019/02/ttip-reloaded-big-business-calls-shots-new-eu-us-trade-talks one of CEFIC’s key demands was to open the European market to US imports of shale gas. The European fertilizer industry has also been a major proponent of fracked gas in Europe.

Yara is also part of national-level groups as well as other registered interest groups they have not declared. The company’s CEO, Svein Tore Holsether, is a member of the Executive Committee and Chair of the Food & Nature program for the World Business Council for Sustainable Development (WBCSD), a major promoter of ‘climate smart agriculture’, which tries to dress up fertilizers as being climate friendly. Yara is also a member of IFIEC Europe, the association for the interests of industrial energy users in Europe. IFIEC President Steinar Solheim is Head of Energy Regulatory Affairs at Yara. IFIEC, together with Fertilizers Europe, has been at the forefront of the push for fracked gas in Europe.

Taking part in expert and advisory groups, which are known to be very influential in the drafting of legislation, allows corporate actors to be involved and exert greater influence from the beginning of the process.

Although Yara does not declare involvement in any of these groups, it does sit in the Commission’s Gas Coordination Group on behalf of IFIEC Europe. This influential advisory group looked at security of supply and provided its members with privileged access to upcoming plans for new gas infrastructure and other Commission proposals between 2015 and 2018. As a major user of fossil gas, this provided Yara an important opportunity to protect its interest and maintain Europe’s fossil fuel dependency.

Fertilizer Europe declares membership of a remarkably long list of expert groups, among them the influential Expert Group on Climate Change Policy and the High Level Expert Group on Energy-Intensive Industries.

Through the back door to the European Parliament

Another way to gain access to EU decision makers is through the MEP industry forums. These groups bring MEPs from different political groups together with industry representatives, offering ‘under the radar’ lobbying opportunities as the European Parliament fails to regulate these forums. Fertilizers Europe is a member of the European Energy Forum (EEF), which organizes bi-monthly dinner debates at the European Parliament and briefing sessions for MEP assistants on energy-related topics.

Fertilizers Europe also created the Forum on Fertilizers and Nutrients for Growth, through which they persuade friendly MEPs to lobby for their interests in big EU policy dossiers such as air quality regulations or the Emissions Trading System (ETS). At one of the Forum’s public events, a Yara executive was able to argue the case for industry-friendly regulation on a panel alongside an MEP and a high-level Commission employee.

Another way to increase your influence in Brussels is to pay lobby consultancies to secure access to decision-makers and increase the spread of your messages. Logos, a global public affairs agency, lists Yara as a client that engaged their services for up to €100,000 in 2017.

And the power of the media should not be underestimated; a growing influence tool in the Brussels Bubble is to sponsor the media by paying for promoted content. EURACTIV’s The Brief, powered by Yara from June 2018 contains a message promoting the company’s so-called solution to reducing air pollution from ammonia emissions. The fertilizer industry is a huge contributor to the problem, but Yara’s proposal, presented in a paid-for video hosted by EURACTIV, focuses on using the ‘right’ fertilizer mix, rather than less of it. Nine months later EURACTIV featured another promoted content video by Yara, pushing the same message as part of its new #HealthyPlantHealthyPlanet campaign in favour of fossil gas-based fertilizers.

Yara and its network of lobby groups are promoting the increased use of fossil fuels, particularly fracked gas, and selling their poisonous business as a solution for the climate and agricultural crisis. Their message has been echoed by decision-makers throughout Europe.

If we want policies that tackle the climate crisis, the companies that are causing the problem should be kept well away from the decision-making process. This is a fundamental problem in the EU, where regulators see industry as a partner rather than as an entity to be kept at arm’s length. It is time for a truly fossil fuel free politics!

To download the Yara infographic, right-click and 'save image as'.