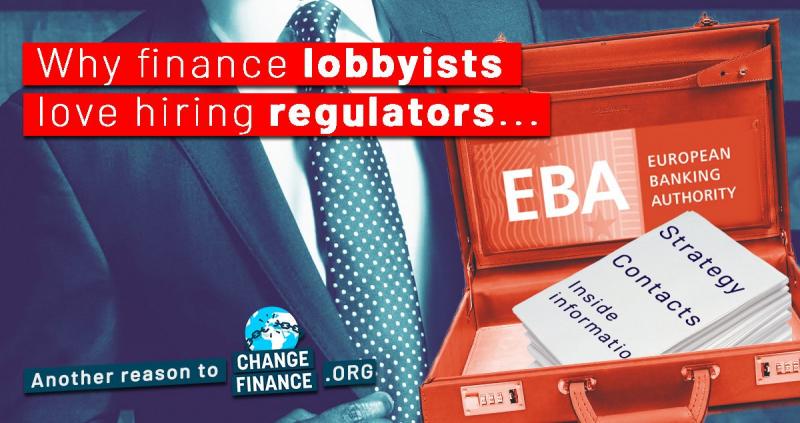 On September 17th, it was disclosed that Adam Farkas, the current executive director of the European Banking Authority (EBA), will join the Association for Financial Markets in Europe (AFME) as its Chief Executive Officer as from February 2020.

As the supervisor of the EU’s banking and financial sector, the EBA is one of Europe’s most important institutions and a prime lobbying target for the industry. The direct shift of EBA’s executive director to the sector’s most powerful lobbying group – AFME represents the interests of over 180 banks and finance institutions – raises alarm bells.

The approval granted by EBA’s Board of Supervisors is not only a very serious mistake,but a violation of Article 16 of EU staff regulations, and we demand this decision is taken back.

The executive director of the EBA has privileged information on planned EU strategy on banking and financial markets, a formidable network and a command over decision-making processes. This is the result of spending 8 years in a top position of a public body, and as such, he should not be able to sell it on to an organisation whose interests greatly differ from the interests of the EBA. Under his leadership, AFME’s staff and membership will gain the ability to directly or indirectly exert undue influence on lawmakers and regulators, and a tunnel vision will allow financial risks to build up.

In the European Union, a decade of debate on financial regulation has not repaired the old flaws that became apparent in 2007/08. Europe still houses banks that are too-big-to-fail, the finance sector is driving environmental breakdown and social inequalities, and the risk of another financial crisis is still with us.

One of the necessary precautions is to defend public decision-making from the powerful influence of financial corporations, including applying strict
rules on ‘revolving doors’. Already this year, the EBA hired a new Chairman,

José Manuel Campa, who came straight from a position as top lobbyist for the Spanish financial corporation Banco Santander. If the executive director of the EBA now transitions to AFME as planned, it will inflict severe damage to public trust in EU supervisory authorities as well as the independence of the EBA.

Regulators of banks must be beyond reproach on ethics, transparency and integrity. We therefore urge the Board of Supervisors of the EBA to:
- revisit and promptly reverse this decision
- review and duly enforce the EBA’s rules on ‘revolving doors’
- improve transparency about its relationship with the financial lobby

If there is any value to the words on “no conflict of interest” in the EU rules, then this case must prove it.