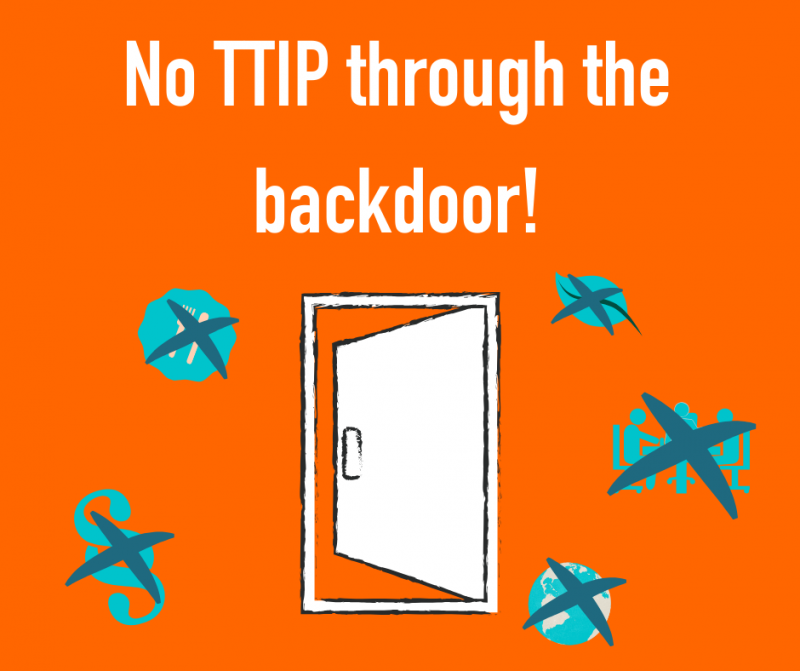 “No TTIP through the backdoor!”

Recent statements by EU Trade Commissioner Phil Hogan have spurred a strong reaction from civil society groups, many of which campaigned against the Transatlantic Trade and Investment Partnership (TTIP). Confronted with US demands to change EU rules on pesticide residues in food, chemical treatment of poultry (‘chlorinated chickens’), and GMOs, the Commissioner said that he will seek solutions to such ‘regulatory barriers’.

A joint statement signed by more than 100 organisations from across Europe expresses grave concern about this development, which bodes ill for EU measures which protect standards, public health and the environment. Furthermore, they warn the Commission against undermining its own “European Green Deal”, for example by watering down pesticide restrictions to appease the US.

“During the TTIP debate the Commission tried to reassure European citizens that it would not sell out on health and environment. And yet just a few years later it appears that the Trump administration has got it to do exactly that, by threatening to impose higher tariffs on cars. This is both pathetic and unacceptable.”

“The European Commission is showing little regard for the official mandate for these negotiations, and zero interest in transparency. We need politicians and governments to take a stand and stop this development.”

The statement calls on member state governments, national parliamentarians and members of the European Parliament to insist that the Commission retract its conciliatory statements to the US Administration. The signatories demand a guarantee that no concessions will be made that would weaken the EU’s food standards and environmental protection.

The groups point out that the existing negotiation mandate given to the European Commission leaves no leeway for any discussions on food safety or agricultural standards. In addition, these 123 civil society groups, including environmental groups, trade unions and farmers organisations, believe that the Commission is entering into dangerous territory, and offering concessions that Europeans would not support :“EU citizens’ commitment to the precautionary approach was strongly confirmed during the public debate on TTIP – a trade agreement that would not have survived a democratic vote within the EU had it included concessions on the scale now demanded by the US.”

The statement and the list of signatories is available here.