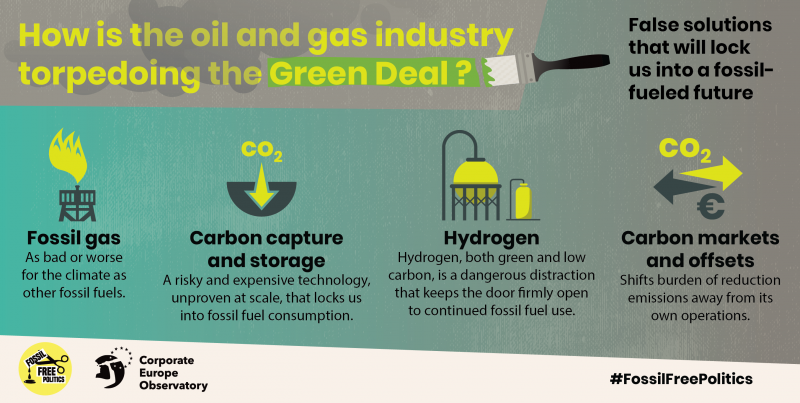 European Commissioner Frans Timmermans, in charge of the European Green Deal (EGD), demonstrates  a shocking lack of  transparency in his dealings with lobbyists, Brussels based lobby-watchdog Corporate Europe Observatory (CEO) warns in its new report 'A grey deal? Fossil fuel fingerprints on the European Green Deal' (1),  that the EGD is slowly discolouring. Due to intense lobbying and lack of accountability, Ursula von der Leyen Commission's flagship policy  - and the related 'Hydrogen Strategy' which is launched tomorrow -  is being hi-jacked by the fossil fuel lobby.

In the first 100 days of shaping the EGD,  top Commission officials in charge of this top priority, have met 151 times with business lobbyists, more than eleven times a week, while keeping hardly any records of these meetings. Worse than the high lobby-numbers is the fact that there is virtually no transparency on what is being discussed. Out of 56 meetings of lobbyists with Commissioner Timmermans and his Cabinet for which CEO requested minutes under the Freedom of Information rules, the EC claims to have only minutes  of three meetings.

Many of the unrecorded meetings are with fossil fuel industry which has big stakes in shaping the EGD, such as Shell, Eurogas, PGE, Cefic, Eni or Gas Infrastructure Europe. CEO will be challenging this malpractice with the EU Ombudsman.

The CEO report shows that the Commission's open door to the gas lobby is a reason for concern. The gas lobby has used green hydrogen  as a cover to push for fossil gas. The Hydrogen strategy, part of the EGD, confirms that the EU will continue supporting the use of fossil gas, a fuel as bad for the climate as any other fossil fuel.

The fossil fuel lobby did not waste the Corona crisis and had close to three meetings a week with EGD decision makers (2). Invest EU (as part of the EU recovery plans) is doubling the public investements for fossil gas (carbon capture and storage, CCS) and hydrogen. The Climate law has now been postponed, and is subject to a strong lobby-campaign by BusinessEurope and others to make any increase in climate targets conditional to an impact assessment on the long term effects of COVID.

Public funding for gas is being supported by some political groups in the European Parliament who want to allow the gas sector to receive EU subsidies via the Just Transition Fund. Far from stopping subsidies of fossil fuels, research revealed last week that also member states still subsidise the fossil sector by more than €137bn per year (3,  4,5).

Belén Balanyá, researcher and campaigner at Corporate Europe Observatory, said: "The fossil fuel lobbies have used COVID-19 times in an opportunistic way to repackage their demands for keeping fossil fuels on the agenda, delay and weaken key elements of the EGD like the Climate law, and get funding for 'false solutions' like CCS."

"Frans Timmermans says that 'few turkeys will be applauding the Christmas diner', referring to the fossil fuel industry defending their position. But it appears that is actually the turkeys who are chosing the menu. He also says we should not waste money by investing in the economy of the past century, but by investing on fossil gas this is exactly what the EU is doing. This while science tells us we cannot afford any single day more of this business-as-usual approach," Balanyá added.

Lala Hakuma Dadci, researcher and campaigner at Corporate Europe Observatory, said: "The EU Green Deal could be one of the most important and hopeful EU policy initiatives. It is testimony to civil society and citizens movement's impact. Excluding public investment funds to fossil fuel industries is key to foster a sustainable and just transition. By putting the billions of investments in sustainable transport, massive renovation and energy saving programmes in a decentralised, community-led renewable energy model, we can avoid the worst climate change perspective and at the same time offer new jobs and more welfare to European citizens."

* 1. The European Green Deal (EGD) is a new 'environmental' growth strategy that seeks to make the EU economy 'climate-neutral' and where "economic growth is decoupled from resource use". It is the jewel in the crown of the new European Commission, and in particular of President von der Leyen and Frans Timmermans, Vice President in charge of the EGD. When Ursula von der Leyen was vetted to become Commission President, she convinced a key number of members of the European Parliament by promising to present a European Green Deal within 100 days of taking office. The proposal was presented in 11 December 2019, and van der Leyen proudly called it "a man on the moon moment" for Europe. The EGD covers an impressive range of areas, from climate and energy policies, transport, agriculture and food, biodiversity, industrial policy, to manufacturing and construction. Its mere existence is a testimony to the success of climate movements, who have been putting increasing pressure on decision makers to take action.

* 2. Between 23 March and 26 May, 25 meetings of fossil fuel lobbyists were logged by the key Commission officials in charge of climate and energy policy making.

* 3. Although the year 2020 is supposed to be the year the EU would launch its ambitious plans to tackle the climate crisis, the actions of many of its Member States show a pattern of climate hypocrisy, according to a new investigation ("Dirty Subsidies: How Europe sabotages its climate goals") the journalistic collective Investigate Europe calculated that European countries subsidise the fossil sector by more than €137bn per year. Before and after Covid-19, showing no sign of changing.

* 4. In a recent report "Tainted love: corporate lobbying and the upcoming German EU Presidency" it was shown how the German Government's 'love affair' with gas and the unconditional support for its automobile sector  its upcoming EU Presidency risks preventing effective climate action by the EU. The German so-called 'Energiewende' is in a serious crisis and is currently being hijacked by the powerful gas industry lobby.

* 5.  The NGO Counter Balance today releases a new report "The EU Climate Bank – Greenwashing or a banking revolution?",  showing some clear loopholes in European Investment Bank's lending policy and the climate ambitions of the largest public investment bank in the world.