Big Tech firms are spending more and more lobbying in Europe – a clear sign of the industry’s growing power. Its increased lobby spending also reflects the importance of key upcoming policy battles. Yet, lack of transparency remains a problem.

The giants of Big Tech such as Google, Amazon, Microsoft, Facebook, and Apple are among the biggest individual corporate lobby spenders in Brussels. Their most recent lobby declarations show a combined €21 million spent lobbying the EU  Sidenote Lobby budget information is self-reported. Entries for Facebook, Amazon, Apple and Microsoft relate to 2019 and Google‘s to 2018. . This lobby spending-spree is a harbinger of key tech-related upcoming lobby battles in the EU that could shape the industry’s future. The tech giants keep finding themselves in hot water with policy-makers and seem to have responded by increasing their lobby spending.

Setting the course for digitalisation

With the adoption of the General Data Protection Regulation (GDPR) and the constant stalling of the ePrivacy Directive, policy energy in the EU has moved on to creating horizontal rules for the big platforms: from potential new competition rules to the much discussed Digital Services Act. The first important decisions are already expected to be taken during the German EU Presidency over the coming months.

This is the perfect occasion to take a closer look at how Big Tech tries to exert influence, and how much it is spends to do so. Big Tech companies and their powerful lobby machinery should not be allowed to subvert political decisions in their favour. To prevent such undue influence, we need to be able to scrutinise the lobby networks of Big Tech. However, as our research shows, transparency is not a strong suit for digital companies in Brussels.

Big Tech has close ties to various think-tanks – organizations that can influence new regulations by publishing studies and position papers and organizing discussion forums – but these ties are often not at all clear. This is a problem as it allows companies to create the impression that their interests are supported by seemingly independent advocates, making it easier for them to influence the political conversation in their own interests. On the flip-side, this situation makes it harder to scrutinise how these big companies exert influence.

Our research shows that Big Tech and think-tanks prefer to keep their ties secret. Think-tanks might not disclose that they are associated with a tech company, or the tech companies themselves keep quiet about their close ties with the think-tanks, ie they do not disclose their membership in their Transparency Register entry. The latter is much more frequent and constitutes a clear violation of the guidelines for the EU Transparency Register. Based on the results of this research, Lobbycontrol has filed a complaint with the Register Secretariat. Corporate Europe Observatory has also filled separate complaints about the Center for Data Innovation and the Information Technology and Innovation Foundation. 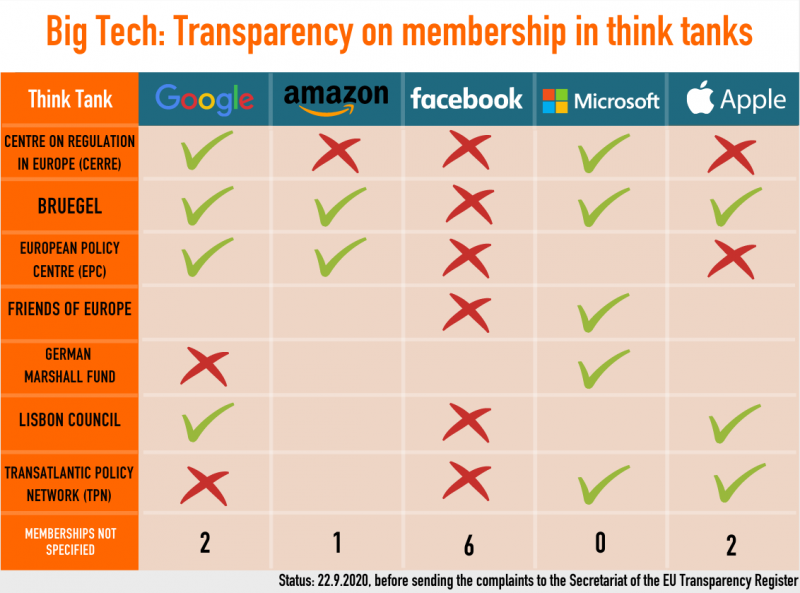 The chart above shows that Facebook in particular has worked with several think-tanks without disclosing it. Apple and Google have also failed to fully reveal their affiliations, and Amazon only declared its links with CERRE after Lobbycontrol’s complaint to the Transparency Register Secretariat

b) Think-tanks with undisclosed company memberships:

Think-tanks also often fail to disclose their ties with the firms. This information is often absent from both their websites, and in the information they submit to the EU Transparency Register.

A closer look at the information ECIPE has submitted to the EU Transparency Register and at how they present themselves to the public raises questions. According to the register entry, for instance, ECIPE does not have any members. Microsoft’s entry, on the other hand, shows that the company is a member of ECIPE.

As reported earlier by LobbyControl, CDI does not disclose any of its members. It also fails to provide any information about who finances them. While Google’s entry in the EU Transparency Register mentions its CDI membership, the think-tank’s entry makes no mention of Google. CDI's other publications, such as its position paper on the Digital Services Act, also mention no associations with tech companies. We believe this to be a clear violation of the EU Transparency Register’s code of conduct. The code requires lobbyists to declare the interests, objectives, or aims they promote, and (where applicable) specify the clients or members whom they represent.

Corporate Europe Observatory has separately filed a complaint against CDI and its affiliated think-tank the Information Technology and Innovation Foundation for failing to disclose its relationship with Big Tech firms and their lobby groups, which seem to have been involved in setting it up, funding it, and overseeing its work. You can read the full complaints here and here.

We hope the Secretariat of the EU Transparency Register will soon be able to resolve these inconsistencies and close the information gaps in order to provide clarity on the ties between Big Tech and think-tanks – at least when it comes to official memberships. In addition, digital companies should voluntarily disclose which think-tanks they support financially even if they are not a formal member. In June 2020 Lobbycontrol demanded Google publish this information but the company refused. In the United States, Google and other tech companies provide lists of organisations they support financially. Yet, in Europe, Google and the like are much less transparent.

The limited information on lobby spending that is publicly available, however, clearly shows that they are very powerful players. 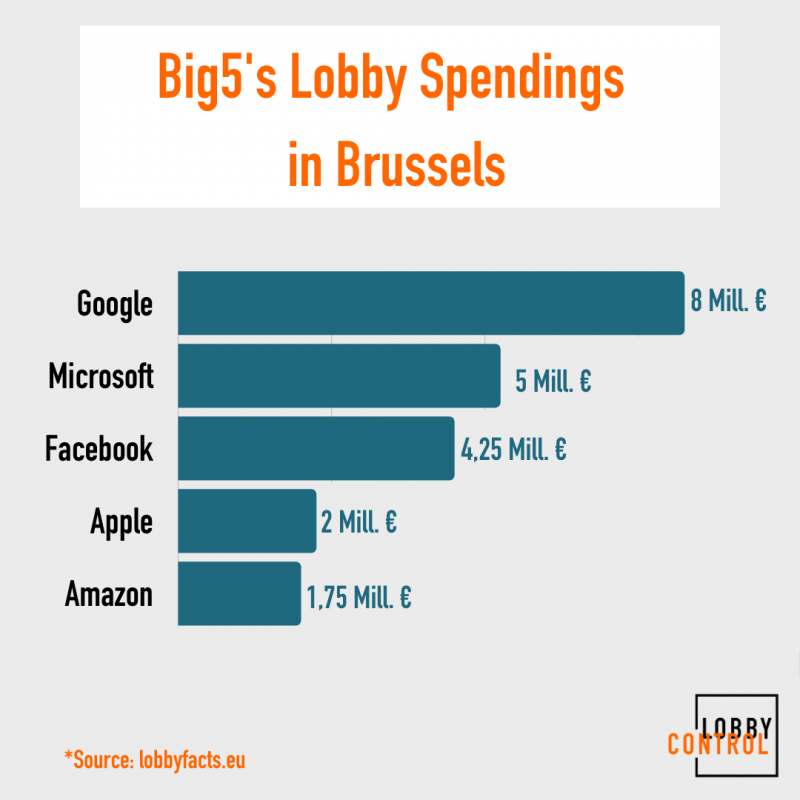 The Big 5 Silicon Valley firms (Google, Apple, Facebook, Amazon, Microsoft, often known as 'GAFAM') are all among the top lobby spenders in Brussels. Google has the highest lobby spend of an individual company with a lobby budget of at least €8 million, followed by Microsoft at €5 million. In fact the only non-tech companies currently in the top 5 individual corporate lobby spenders are oil giant Shell and pharma heavyweight Bayer, who both spent more than €4.29 million and came in third and fourth, just ahead of Facebook in fifth place with at least €4.25million. Apple and Amazon are in the top 30 individual corporate lobby spenders in Brussels, at numbers 16 (over €2 million) and 23 (over €1,75 million) respectively.

Even when the list of top lobby spenders includes all types of organisationsand not just individual companies – for example, industry and employers' lobby groups, and lobby consultancies – GAFAM still rank highly. Google is still the second overall biggest EU lobbyist, only the chemicals lobby group, CEFIC, has a higher lobby budget. All this information, and more, is available in the EU lobby database at Lobbyfacts.eu [www.lobbyfacts.eu].

All five tech firms are also among the top 15 companies who have taken meetings with high level representatives of the European Commission since logs became available in November 2014. Once again, Google tops the list with 254 meetings. Facebook and Microsoft follow in third and fourth place with 155 and 141 meetings respectively.

When looking at all registered entities, only one actor has more meetings than Google: the employers' association, BusinessEurope, of which Google is a member.

Twice as much lobby spending as the mighty car industry

In total, Google, Microsoft, Facebook, Apple, and Amazon have spent €21 million on lobbying  Sidenote Lobby budget information is self-reported. Entries for Facebook, Amazon, Apple and Microsoft relate to 2019 and Google‘s to 2018. . Compare and contrast with the almighty car industry: Europe’s seven biggest car manufacturers – Volkswagen, Daimler, BMW, Renault, Ford, Fiat Chrysler, and Peugeot – have shelled out a total of €7.9 million on lobbying in 2019, less than half of what Big Tech has spent.

What's more, the figures above do not even include the money that trade associations spend on lobbying. There are several big associations representing the interests of digital companies. The ones with the highest EU lobby budget are:

All four associations together have a total lobby budget of €2.15 million. All of them count at least four of the Big Five among their members. With €1.25 million, DigitalEurope has had the biggest lobby budget in 2019. The lobbying encyclopedia Lobbypedia provides further information about DigitalEurope and its activities (article is in German).

The figures highlight how lobbying efforts of Big Tech differ from other sectors: trade associations play a different role than for instance in the traditional car sector. They seem to be more fragmented and specialised, so their power is not as notorious in overall lists, but rather in issue specific analysis as seen during ePrivacy or Copyright Directive.

Trade associations of the car industry, for example, work with considerably more centralised lobbying platforms. Car manufacturers have a habit of joining forces and thus letting their umbrella organizations do most of the lobbying. ACEA, the European Automobile Manufacturers Association, for instance, has a lobby budget of €2.75 million, while the most important trade association of the digital sector, DigitalEurope, spends less than half of that.

Big Tech ramping up its lobbying, both internationally and in the EU, is alarming. Its failure to disclose ties to think-tanks and its lack of transparency are unacceptable. This situation is also a wake-up call for the much needed improvements to the Transparency Register, for example requiring that think-tanks should disclose their funding and membership and enforcing those rules. One thing is clear, as the European Union is preparing a number of key decisions in the coming months that could restrict the power of digital multinationals, we can expect a fierce lobby battle in response. Transparency is the absolute minimum we expect from these companies. We will continue to push for the disclosure of the EU lobby network of Big Tech.