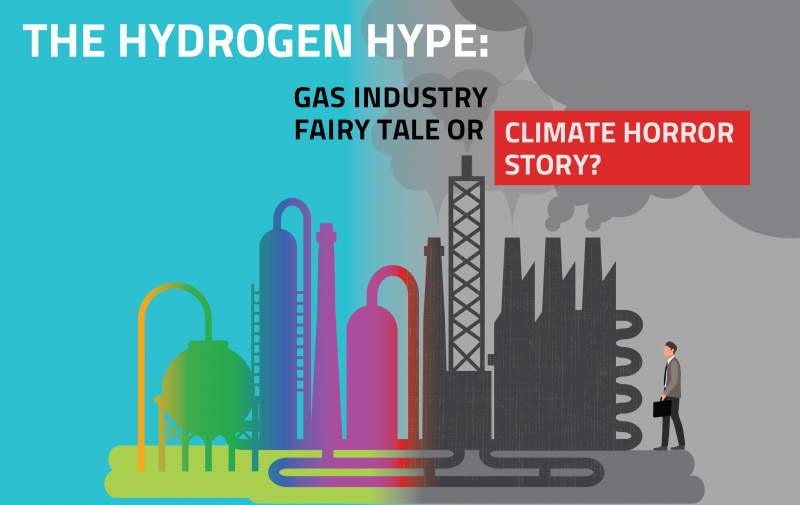 The European Hydrogen Strategy (1), as announced by the European Commission in July, is in fact a ‘Trojan horse’ for the gas industry which managed to secure massive tax payers’ support for investments. That is one of the conclusions of a new investigative report ‘The hydrogen hype: Gas industry fairy tale or climate horror story?’, published today. The report by Brussels based lobby-watchdog Corporate Europe Observatory (CEO), Food & Water Action Europe and Re:Common, is based on an analysis of over 200 documents obtained through freedom of information.

The next few days are packed with significant dates including the first anniversary of the European Green Deal (11 December) and the European Council summit of national leaders (10-11 December) with the EU’s proposed Climate Law on the agenda. Also imminently expected will be the presentation of the Commission’s plans for the new TEN-E regulation, which will be decisive in determining the level of support for gas infrastructure across Europe. Today’s report shows that the EU and national governments’ embrace of ‘hydrogen hype’ risks derailing the Green Deal and Europe’s climate ambitions.

The European Commission’s hydrogen plans are almost identical to the demands of the influential lobby group ‘Hydrogen Europe’, including goals and investments needed for hydrogen both inside and outside the EU, estimated at €430 billion by 2030. The reality is that the EU risks being caught in a fossil gas trap (2).

Belén Balanyá, researcher and campaigner at Corporate Europe Observatory, said: "Today less than 0.1 per cent of hydrogen produced in Europe is from renewable electricity and can thus be called green. More than 90 per cent is produced with climate-destroying fossil fuels. But thanks to a coordinated, massive lobbying campaign the gas industry has secured massive amounts of tax payers’ subsidies. Every policy-maker should acknowledge that the gas industry’s hydrogen hype has nothing to do with tackling the climate emergency, and everything to do with ensuring the core business model of energy giants is seen as relevant - and profitable.”

Our new research finds that in just one year the hydrogen lobby spent almost €60 million influencing European policy-makers, and met with key hydrogen-related EU commissioners and their cabinets more than 13 times a month between December 2019 and September 2020.

The mastermind behind two of the most influential groups pushing the hydrogen hype, Hydrogen Europe and the Hydrogen Council, is PR firm FTI Consulting, recently exposed in the USA (3) for creating fake pro-fossil fuel grassroots organisations on behalf of Big Oil and Gas. Also revolving doors are in full swing: two deputy directors general for energy at the European Commission have ended 30 year careers to go straight into jobs with law firm Baker MacKenzie, which is building up its hydrogen profile.

Frida Kieninger, campaigner at Food & Water Action Europe said: “Our report reveals how big gas pipeline operators like Snam, Gasunie, Enagás and Fluxys are using hydrogen to get support and funds for Europe’s oversized fossil gas infrastructure network. This so called ‘Hydrogen Backbone’, a plan for a network that could include 23,000 km of pipelines by 2040, is a rebranding exercise of the gas industry. Even if Energy Commissioner Simson is not yet clear whether gas projects will be excluded from priority infrastructure-projects under TEN-E, there is a high risk the EU will lock us in further to a fossil fuel future.”

Elena Gerebizza, energy campaigner at Re:Common said: “Conflict of interests are big. The European Commission has put the gas industry in the driving seat of new hydrogen-focused bodies, such as the ‘Clean Hydrogen Alliance’, tasked with drawing up a list of hydrogen projects eligible for public funds. The gas lobby intends to use  hydrogen hype to preserve the current centralised, fossil fuel-based energy model that is owned and controlled by a small handful of Big Energy corporations, including the Italian transmission system operator Snam. Instead the EU should be focussed on real climate solutions which lie in decentralised, electrified, sustainable energy production which would benefit both the climate and citizens.“