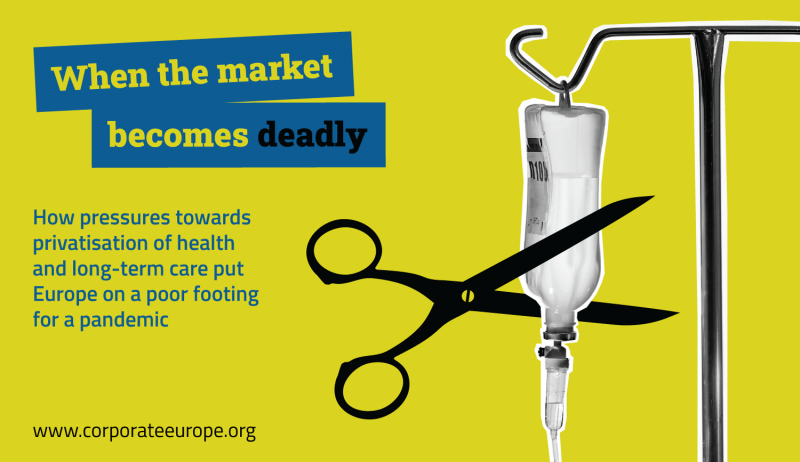 From hospitals to care homes, the outsourcing and privatisation of healthcare, in combination with various austerity policies, have significantly degraded EU member states’ capacity to deal effectively with COVID-19, costing extra lives. A new report by lobby watchdog Corporate Europe Observatory (CEO) published today shows that neoliberal reforms that weakened public healthcare systems were in part the result of EU policy pressures [1]. Private hospitals, meanwhile, are lobbying to further expand the role of the private sector and get a slice of the EU’s corona crisis recovery funds.

The new report – drawing upon documents obtained via ‘Freedom of Information’ requests – shows an alarming bill of health for Europe’s health care policy. The marketisation of health and long-term care, the push for Public Private Partnerships, and the public spending cuts encouraged by EU economic governance processes like the European Semester [2], have all contributed to the increased privatisation of health and long-term care services.

Neoliberal reforms have had disastrous implications for health and care systems’ ability to handle the pandemic. Health budget cuts have led to understaffing and reduced total hospital bed numbers. The rise of private hospitals goes hand in hand with a fall in intensive care beds, which are less profitable for private companies. A UNDP analysis [3] found that healthcare privatisation contributed to more deaths from COVID-19.

EU pressure to cut public spending (including via the European Semester process) has contributed to the commercialisation of the healthcare and elderly care sectors, with catastrophic effects during COVID-19, particularly in care homes [4]. CEO’s research shows that including healthcare in the EU’s ‘economic governance’ recommendations was a priority of BusinessEurope, one of the most powerful corporate lobby groups in Brussels. Documents released via FOI show that the European Commissions consulted with private healthcare providers when drafting its European Semester Country Reports.

The new report documents the influence of the private healthcare lobby including the European Union of Private Hospitals (UEHP), a Brussels-based lobby group active promoting an “internal market in the field of healthcare”. Abusing the pandemic, the private hospitals lobby is demanding more public money, including from EU Recovery Funds, under the flag of “a level playing field” between public and private hospitals.

In November 2020 the European Commission presented its initial proposal for a European Health Union [5], which would give the EU more power over health policy. As the Health Union is being shaped, CEO’s report highlights the need to safeguard the public not-for-profit nature of healthcare provision in Europe, and ensure that COVID-19 recovery funds are not siphoned off to for-profit providers. Trade unions and public health activists are demanding the EU stops pushing for commercialisation and privatisation that undermine public healthcare systems, and to not to return to pre-COVID-19 austerity rules.

Olivier Hoedman, researcher at Corporate Europe Observatory (CEO), said: “As decision-making on the EU Health Union gathers pace, the EU needs to end its neoliberal policies that have resulted in damaging budget cuts and promoted the privatisation and commercialisation of healthcare and elderly care systems, thereby weakening Europe’s pandemic preparedness. Without learning from past mistakes [6], the EU Health Union will be built on very unhealthy foundations.”

“CEO and other NGOs, like the European Public Services Union and the European Network against the Commercialization and Privatization of Health and Social Protection, demand that the EU ignores the private sector lobbyists now whispering in its ear, and reverses course on the kind of economic governance which has accelerated healthcare liberalisation. Instead it should put public provision at the centre of its strategy, or  risk putting more lives at stake.” [7]

1. You’ll find the report ‘When the market becomes deadly: How pressures towards privatisation of health and long-term care put Europe on a poor footing for a pandemic’ here.

3.‘The study ‘Privatization and Pandemic: A Cross-Country Analysis of COVID-19 Rates and Health-Care Financing Structures:’ by the United Nations Development Programme (UNDP) looking at the effect of healthcare privatisation on COVID-19 found that a “10% increase in private health expenditure relates to a 4.3% increase in COVID-19 cases and a 4.9% increase in COVID-19 related mortality”.

4. Health has been an important and recurring theme since the first European Semester in 2011. In total, the European Commission has issued 107 recommendations related to the health sector (including ‘long term care’). Bearing in mind that each country typically received 4-5 recommendations annually, this shows health to be a major issue.

5. As part of its crisis response policies the EU has launched a €9.4 billion EU4Health funding programme for 2021-2027, “to build resilient health systems in the EU to better equip us for the future”. Alongside proposed measures to tackle cross-border health threats and make medicines available and affordable, EU4Health includes a third pillar of ‘strengthening health systems’. Under this point, the Commission wants to “improve accessibility, efficiency and resilience of health systems” and “reduce inequalities in accessing health care”. Concrete proposals for strengthening health systems are still to be presented.

6. At a time when the evidence against commercialisation of healthcare is mounting, the Commission accepted help from private consultancy giant McKinsey (known for its role in increasing the privatisation of the UK NHS) in its COVID-19 crisis response. The Commission has refused CEO access to some of the key documents  about the precise role of McKinsey and its advice, keeping the public in the dark.

7. Trade unions and campaigning groups, together with thousands of health and social care workers, have been demonstrating for increased health care funding, better pay and conditions for workers, increased staffing, and a block on closures and privatisation. On 7 April 2021 (World Health Day), there is the Day of Action for #Health4All, coordinated by the European Network Against the Commercialisation and Privatisation of Health and Social Protection. This day of action will focus on the European Citizens Initiative and the demand to invest more in healthcare and health workers.[https://noprofitonpandemic.eu]