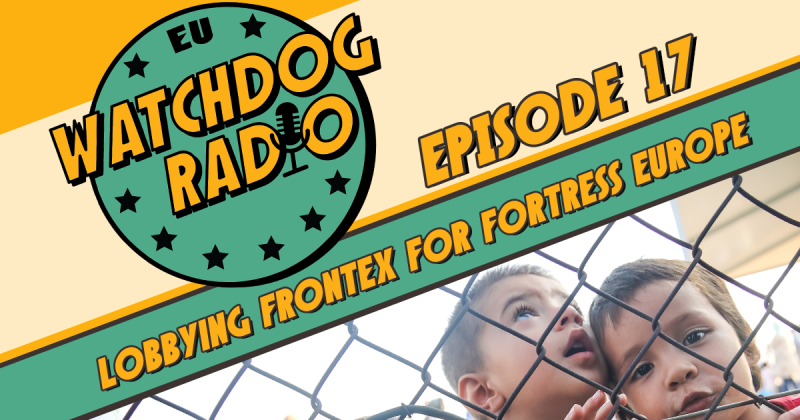 In this new episode we dive into the incredible story on how Fortress Europe is being constructed by an European agency called the ‘European Border and Coast Guard Agency’ AKA Frontex, almost in the dark and without any democratic oversight. With billions of EU tax payer’s money and the help of dozens of lobbyists from defence, arms and surveillance technology industries, Frontex is creating a world that George Orwell would have found inspiring when writing his book ‘1984’.

In the first weekend of February the website of CEO and German TV programme ZDF Magazin Royal almost crashed. Reason? The publication of the Frontex Files. Three researchers - Myriam Douo, Luisa Izuzquiza and Margarida Silva - published the analysis of the relationship between the Frontex and a multitude of corporate interests, mostly companies from the Defence, Arms and surveillance technology sectors.  The publication was called ‘Lobbying Fortress Europe - The making of a border-industrial complex.

Based on over 130 documents covering meetings from 2017 to 2019, the research found an agency that is in constant and systematic contact with arms, surveillance and biometrics industry representatives. This while Frontex told the European Parliament a few years ago it never meets with lobbyists. The new research found that industry lobbyists are pushing a narrative where migrants are a security threat for which the solution is to spend more public money acquiring their equipment (from guns, drones, surveillance equipment to facial recognition tools).

Many of these techno-fixes could have serious human rights consequences, not only for refugees but alsof or European citzens. That is certainly the case with biometrics technology, including facial recognition surveillance. Yet, human rights organisations or experts on fundamental rights are kept out of Frontex's discussions. The three researchers also found that the massive expansion of  the budget and power of Frontex in just a few years has unfortunately not been matched by an increase in transparency, accountability, nor scrutiny. The LIBE Committee in the European Parliament very recently announced the  creation of a working group to hold Frontex accountable.