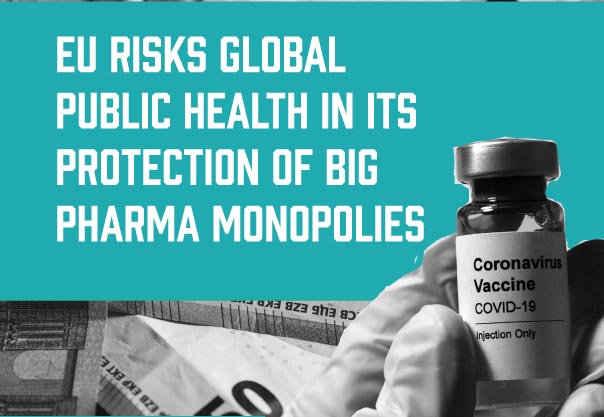 President of the European Commission Ursula von der Leyen stated solemnly at a WHO press conference in April 2020: “We need to develop a vaccine. We need to produce it and to deploy it to every single corner of the world. And make it available at affordable prices. This vaccine will be our universal, common good.” Today we know, given the EU's political position, that this was purely rhetorical.

In response to global south calls in the World Trade Organization for patent waivers for COVID-19 vaccines, testing materials, and treatments, the EU insists this is unnecessary as global trade rules already have ‘flexibility’ built in. This despite ample evidence to the contrary.

At the same time, the EU has so far rejected any talk of suspending 'intellectual property rights'. This position is in line with the blocks historical role. The EU has been waging a ‘war on cheap drugs’ for over two decades, and done everything in its power to strengthen patent rules. This includes a campaign to make third countries introduce 'data exclusivity' in their own laws, a move that hass undermined the flexibility under international rules. Today, its protection of big pharma profits and monopolies could have dire consequences. A massive, urgent expansion of production of vaccines worldwide is what is needed to bring the pandemic to an end, but patents stand in the way.

Read our briefing about how the EU has worked systematically over the years to strengthen patent rules worldwide to the detriment of public health.