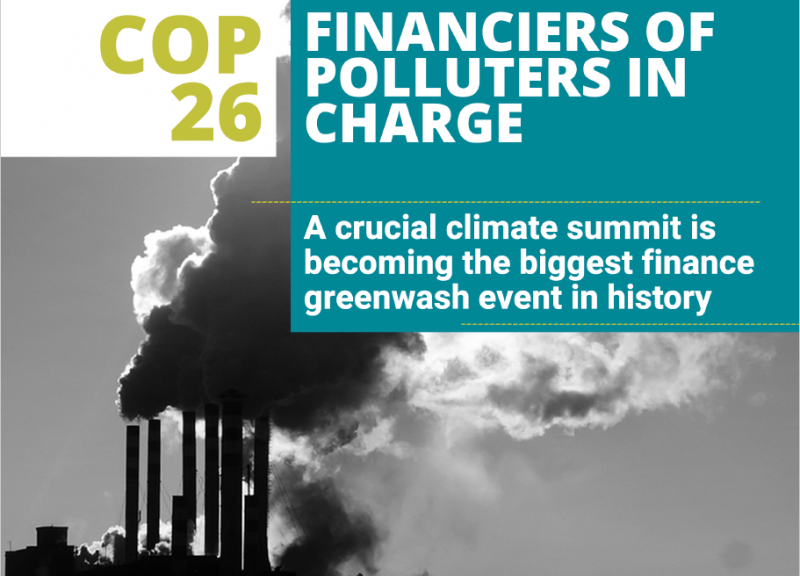 Some of the worst financiers of the worst polluters helped write the script - and more, they will implement the decisions after the summit in Glasgow.

At the climate summit in Glasgow in November 2021, delegates will for the first time consider how to reform financial markets to ensure that financial flows are “consistent with a pathway towards low greenhouse gas emissions and climate resilient development.” But not only should expectations be low - we should worry that the first real attempt to address the continued massive influx of money into eg. new fossil fuel supply will end in inertia and symbolic statements. That is the conclusion in  a briefing by Corporate Europe Observatory and Transnational Institute (Spanish version available for download here).

The current proposal on the table, though, is not for governments to embark on an ambitious reform process to prevent financial firms from making investments that endanger the future of the planet. The 31 page proposal on Private Finance, authored for COP26 by special advisor to the UK Prime Minister and to the UN Secretary General Mark Carney, is based on ideas developed by the big players on financial markets themselves.

It is no surprise then that self-regulation is at the heart of the proposals. But it gets worse. Not only have the proposals been developed by the likes of JP Morgan Chase, BlackRock, BNP Paribas and other financial firms with a heavy engagement in fossil fuels, but many of these same firms will also be leading the follow-up to COP26. Once the event is over in Scotland, governments are not called on to do anything of substance on private finance and climate after the summit – the likes of Bank of America, Citigroup and BlackRock will take it from there.

The ticket for financial firms to become part of the coalition that will lead the COP26 follow-up is a commitment to “net zero by 2050”, ie. carbon neutrality three decades from now. The vagueness of this commitment leaves the door wide open to convenient loopholes, and for corporations to do little or nothing to reduce their carbon emissions for years to come. In sum, even if a financial firm continues to invest massively in fossil fuels, it can still be actively included in the UN agenda on private finance and climate change. Sadly, the upcoming COP26 looks set to become the biggest finance greenwash event in history.

The English version of the briefing can be downloaded here.