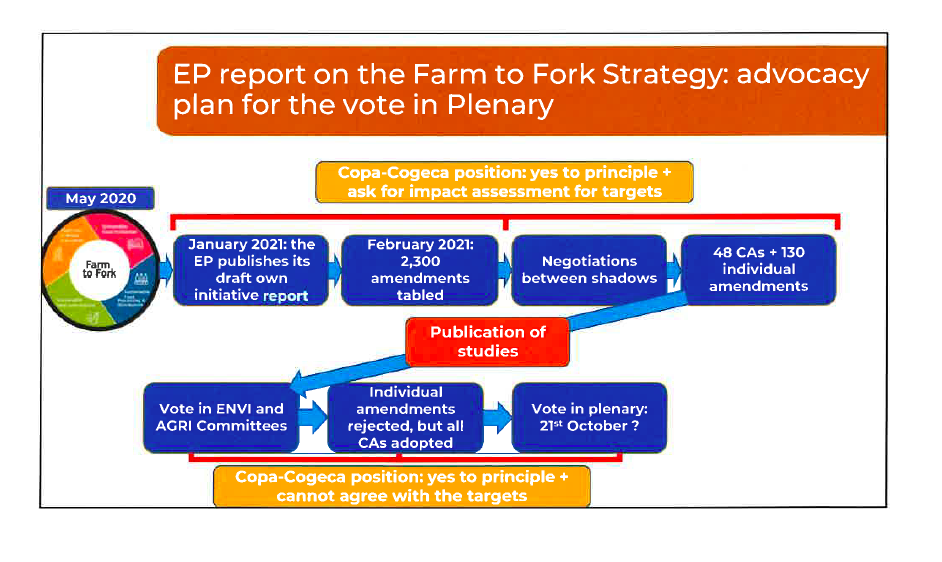 Leaked internal lobby documents from Copa-Cogeca reveal a coordinated attack by industrial  agri-food lobbies on the EU’s sustainable food (Farm to Fork) strategy. The lobby strategy aims to create an echo chamber of anti-Farm to Fork messages using partial findings from a series of ‘impact studies’, many of which funded by the industry itself. (The documents can be downloaded below this article).

This comprehensive attack, targeting in particular MEPs, is fueled by partial studies (some funded by the industry itself) and deliberate spread of misleading information.The agri food lobby campaign against the Farm to Fork peaks in mid-October, as the European Commission organizes a high-level conference on their strategy this week (14-15 October), and the European Parliament votes in plenary on their own Farm to Fork opinion next week, likely on 19th October. In response, on Tuesday 12 October CropLife and Euractiv have an event featuring the ‘impact studies’ particularly on pesticides; on Wednesday 13 October Livestock Voice brings an event to “complement” the first one; and on Thursday 14 October Corteva/Euractiv event will repeat the exercise.

An internal powerpoint presentation given to Copa-Cogeca's members on 27 September 2021, and an accompanying argumentation document, show that:

- A series of ‘impact studies’ are cited as justification to explicitly object to the proposed targets as they supposedly “all point in the same direction”. Yet, the European Commission study clearly stated that major methodological limitations made it impossible to model accurately the impacts of the Farm to Fork Strategy. A summary powerpoint of all industry-funded studies used by Copa-Cogeca does not even acknowledge the limitations and basic assumptions of those studies. All studies mentioned fail to take into account crucial parameters such as food waste reduction, dietary shifts, positive ecological feedback loops (e.g. better natural pest control from the restoration of agro-ecosystems), farm subsidies, and trade policy and patterns.

- An INRAE paper which challenges the USDA study, and an INRAE-Sciences Po study which shows very different results on global trade patterns are not acknowledged by Copa-Cogeca.

- An ‘impact study’ and a policy paper authored by Wageningen University researchers but funded by CropLife Europe is a key element of the anti-Farm to Fork campaign. The Wageningen researchers who carried out the work also attended a high-level lobby meeting with the European Commission in July, and now act as speakers in two Euractiv lobby events in one week. But in the event announcements, the corporate funders of the Wageningen work are not even mentioned.

- MEPs have been pushed by Copa-Cogeca to postpone the plenary vote on their Farm to Fork opinion by two weeks (originally scheduled for week starting 18th October), to allow time for their staged "public debate" around the impact studies to .. have an impact.

- The anti-Farm to Fork lobby apparently has prior knowledge of articles that will be published on media platform Euractiv and that fit with their agenda. The presentation mentions that in the week of 18 October 2021, Euractiv will publish a “package” of articles “to explain the common elements between the different impact assessments”. Euractiv’s editorial charter however states: “We maintain our independence with an innovative business model and do not privilege views from sponsors”.

- The attack on the Farm to Fork targets is being coordinated across the agri-food sector by an unholy alliance of farmers’ representatives with agricultural tech and chemicals lobbies and industrial livestock industry lobbies; on 1 October, Agri-Food Chain Coalition and the European Livestock Voice had a “coordination committee” meeting and a second meeting is planned in the week of 18 October.

Another document shows how Copa-Cogeca tells MEPs to get rid of any supportive wording for the pesticide, fertilizer and antibiotic reduction targets. 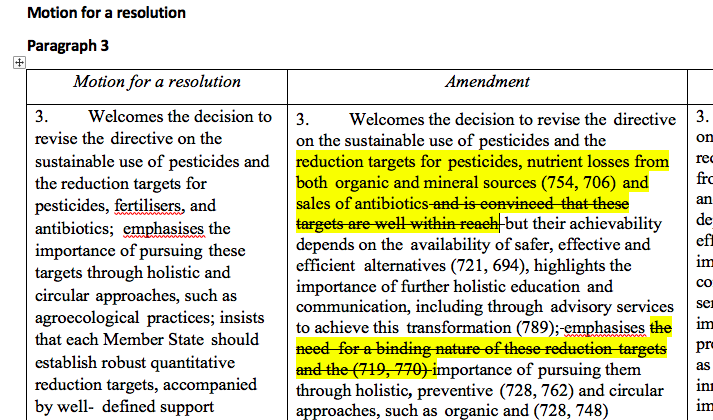 At a time when climate change and biodiversity decline confront us with the greatest global and existential threat, and the agriculture sector has a major role in these crises, this deliberate misrepresentation of the impacts of the Farm to Fork Strategy does a great disservice to society at large. Moreover, it’s detrimental to the farmers in particular whose interest Copa-Cogeca is meant to represent, exposing them to the impacts of climate change and biodiversity collapse and preventing them from adopting more sustainable farming methods which would ensure their businesses in the long-term.

The question is if these tactics will succeed in fooling many people, since a whopping 1.2 million European citizens have demanded a phase-out of synthetic pesticides.

Annex: Limitations of ‘studies’ on potential impacts of the Farm to Fork Strategy:

The studies they use do not model the following crucial aspects: