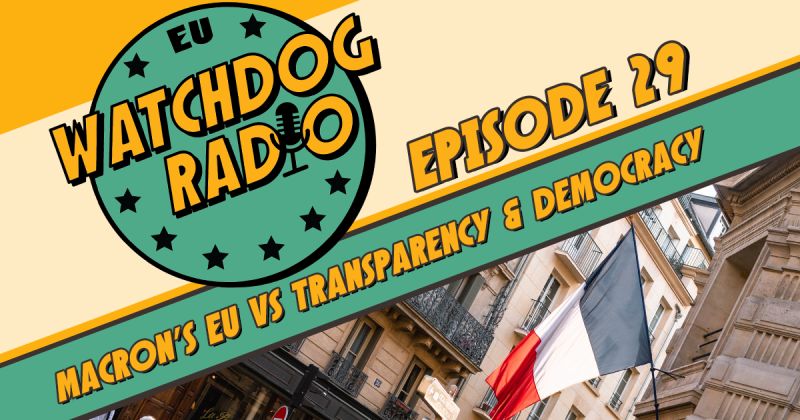 In this new episode of EU Watchdog Radio we discuss France, French politics, the role that French President Emmanuel Macron wants to play in the EU and what vision he has for the future of Europe. Disclaimer: the French Presidency of the EU Council which started on 1 January promises a very corporate-driven future of Europe!

An EU Presidency prepared in close collaboration with the French corporate sector which is setting a policy agenda that strongly reflects business demands. That was the verdict of Corporate Europe Observatory and Observatoire des multinationales in their new report “Under the influence: the distorted priorities of the French EU Council Presidency”, published in the run up to the start of the French Presidency on 1 January.

The French Presidency will have a particular resonance both in France itself, coinciding as it does with President Macron’s re-election campaign, and at the European level, with many critical pieces of legislation and policy on the line, including on climate, nuclear energy, digital technology, defence, tax, finance, health, corporate due diligence, and labour rights.

But, the public interest looks to lose out where French multinationals could win. The French Government is set to promote its own vision for supporting powerful ‘champions’ from among EU and especially French multinationals, no matter that these will not be very different from the overseas players that Macron criticises.

Macron presented the agenda of his government’s Presidency of the EU Council to the European Parliament in a plenary session in Strasbourg this week. A key word during his speech was ‘sovereignty’, a buzzword in his recent speeches about Europe. The slogan of the French EU presidency, covering the first half of 2022, is "relance, puissance, appartenance" (revival, power, belonging). All three terms are variations of the concept of ‘sovereignty’.

But what does Macron mean by this term, sovereignty,  and what implications does it have for EU citizens? And, by the way, what happened with the other famous three-word slogan connected to France: liberté, egalité fraternité? Or in other words what happened to French and  European democracy?

To answer these questions we’ll talk in this episode first to CEO researcher Vicky Cann and then Lora Verheecke, researcher for Observatorie des multinationales.

This podcast is produced by CEO and Counter Balance. Both NGOs raise awareness on the importance of good governance in the EU by researching issues like lobbying of large and powerful industries, corporate capture of decision making, corruption, fraud, human rights violations in areas like Big Tech,  agro-business, biotech & chemical companies, the financial sector & public investment banks, trade, energy & climate, scientific research and much more…