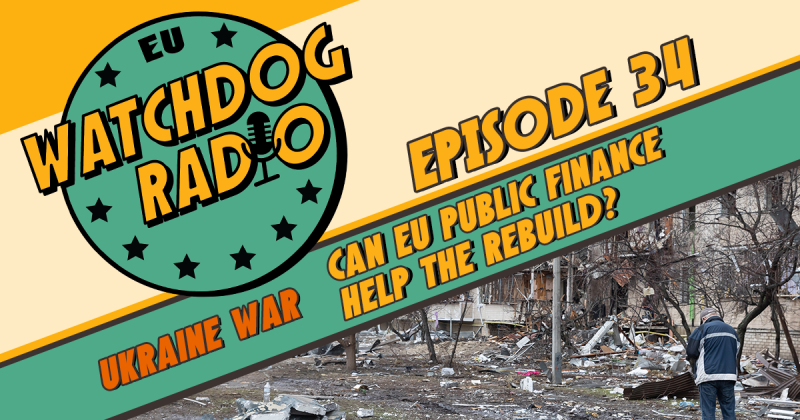 In the latest episode of EU Watchdog Radio, we discuss how EU public finance institutions like the European Bank for Reconstruction and Development (EBRD) should approach the rebuilding of Ukraine after the war comes to an end.

Russia’s hostile invasion of Ukraine sent shockwaves across Europe and beyond. The war has forced over 6.8 million people to flee the country, with millions more internally displaced.

The damage done to Ukraine’s infrastructure has been colossal. Speaking at the World Economic Forum in Davos, Ukrainian President Volodymyr Zelensky claimed that rebuilding the country would cost over half a trillion dollars. Zelensky has also said that 95 percent of buildings in the city of Mariupol had been destroyed, while the mayor of the recently liberated city of Kharkiv said that 1 in 4 homes in the city were now uninhabitable.

European public finance institutions have already provided immediate assistance to Ukraine. The EBRD committed an initial €2 billion to help both within Ukraine and neighbouring countries who have taken in refugees. The European Investment Bank also approved an initial €668 million of assistance at the beginning of the conflict, as well as a €4 billion credit line to support EU states hosting people who have fled the country.

Given the scale of the reconstruction needed, this is probably just the start. The EBRD in particular has been heavily involved in investing in Ukraine since the country joined the bank in 1992. Yet its investments have primarily favoured businesses, with over 40 percent of its total support going to the private sector. This is despite many projects having hugely negative social and environmental effects. For instance, Ukrainian agribusinesses giant Myronivsky Hliboproduct Pjsc has received €275 million from the EBRD since 2010. The company is associated with intimidation of communities who live near a poultry farm and has also been criticised for polluting local water sources with excessive amounts of nitrate.

In this episode, we speak with Fidanka Bacheva-McGrath, a campaigner with CEE Bankwatch Network. We discuss the EBRD’s operations in Ukraine before the war, including the bank’s support for controversial projects as well as nuclear energy.

We cover what lessons the bank can learn from these past mistakes, and how they may inform future reconstruction efforts. Finally, we talk about the EBRD’s relationship with Russia, and what must change after the country’s hostile invasion of Ukraine.