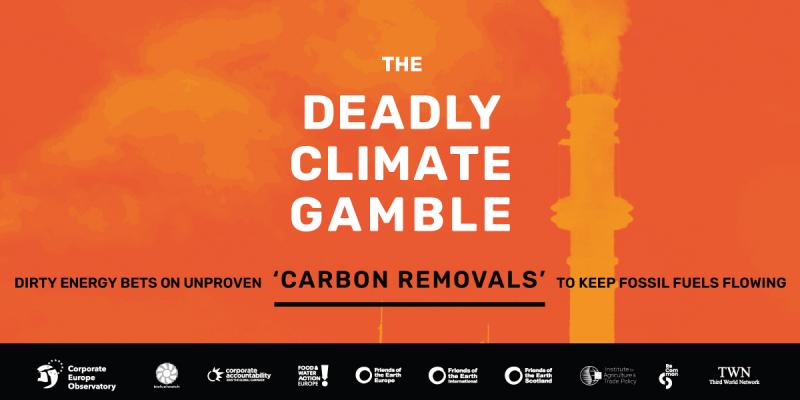 Civil society groups urge the EU to reject upcoming proposal for carbon removals, warning of fossil fuel agenda behind it

Ten civil society groups have published a report urging the EU to reject an upcoming proposal by the European Commission (EC) on the certification of carbon removals. The report concludes that this proposal is just another way for the oil and gas industry to keep fossil fuels flowing, risking catastrophic consequences.

The deadly climate gamble, published by Corporate Europe Observatory in collaboration with nine other groups, examines the responses from fossil fuel companies such as Equinor, Eni and Shell to the EC’s public consultations that paved the way for the upcoming proposal.

The upcoming legislation - due to be presented on 30 November -  is a follow-up to last year’s Communication on Sustainable Carbon Cycles, and both sit within the EU goal of net zero by 2050. Net zero is based on the idea that continued emissions can be balanced by the removal of carbon from the atmosphere through offsetting, capturing, or removing CO2. The widespread acceptance of this theory is partly thanks to the lobbying of energy giants.

At the heart of the proposal is the push for carbon capture, utilisation and storage (CCUS). Despite its repeated failures - being branded a waste of public money and mostly used to pump more oil -  CCUS is an integral part of the ‘carbon removal’ technologies proposed by the Commission.

Carbon removal plans for net zero are in direct contradiction to the Intergovernmental Panel on Climate Change (IPCC), which makes it clear that only rapid emissions cuts over the coming decade can keep us below 1.5ºC warming, and its most recent report explicitly concludes that CO2 removal “cannot serve as a substitute for deep emissions reductions”.

“These policies will guarantee that we will overshoot 1.5ºC, triggering catastrophic consequences for the climate.

“The same companies who want a free pass to keep pumping oil and gas are making wildly unrealistic promises about 'capturing' their emissions or removing them from the atmosphere at a later, unspecified date.

“CCUS and other risky, largely untested geoengineering technologies are a get-out-of-jail-free card for Big Polluters. A real solution to address the crisis starts with the rapid phase out of fossil fuels.”

CCUS is also a key piece in the grand hydrogen hype. EU hydrogen plans include ‘blue’ hydrogen made using fossil gas, with the promise (always in the future) that CCUS will capture and store emissions.