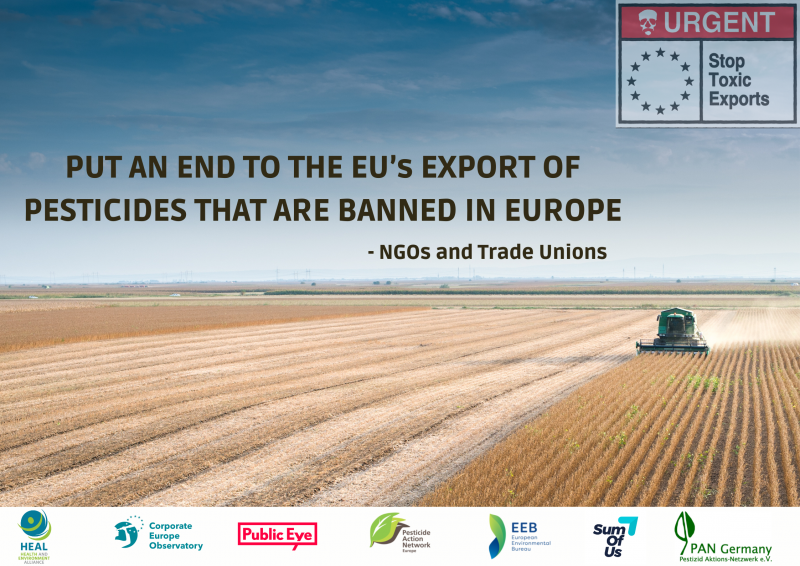 Ahead of 3 December Global No Pesticides Day, More than 326 civil society organisations from across the globe, institutions and trade unions have published a Joint Statement demanding a ban on the export of hazardous chemicals that are forbidden in the EU. They urge the European Commission not to postpone the promised legislative proposal to achieve this.

In 2018 alone, more than 81,000 tonnes of pesticides containing 41 different hazardous chemicals banned for agricultural use in the EU, were exported by European corporations.

The European Commission committed in the EU Green Deal’s Chemicals Strategy for Sustainability Towards a Toxic-Free Environment in 2020 to “lead by example, and, in line with international commitments, ensure that hazardous chemicals banned in the European Union are not produced for export, including by amending relevant legislation if and as needed.” However, the European Commission’s 2023 work programme does not include a much needed legal action to stop this practice.

A spokesperson for the civil society coalition said:

“This should be a non-brainer for the EU to act fast. Low- and middle-income countries like Morocco, South Africa, India, Mexico, Malaysia or Brazil are flooded with dangerous pesticides banned in the EU, which cannot be safely used and which have devastating impacts on both human health and the environment, resulting in widespread infringement of human rights. Moreover, these countries are among the biggest exporters of agri-food products to the EU and so banned pesticides might be ending up on the dinner plates of EU citizens.”