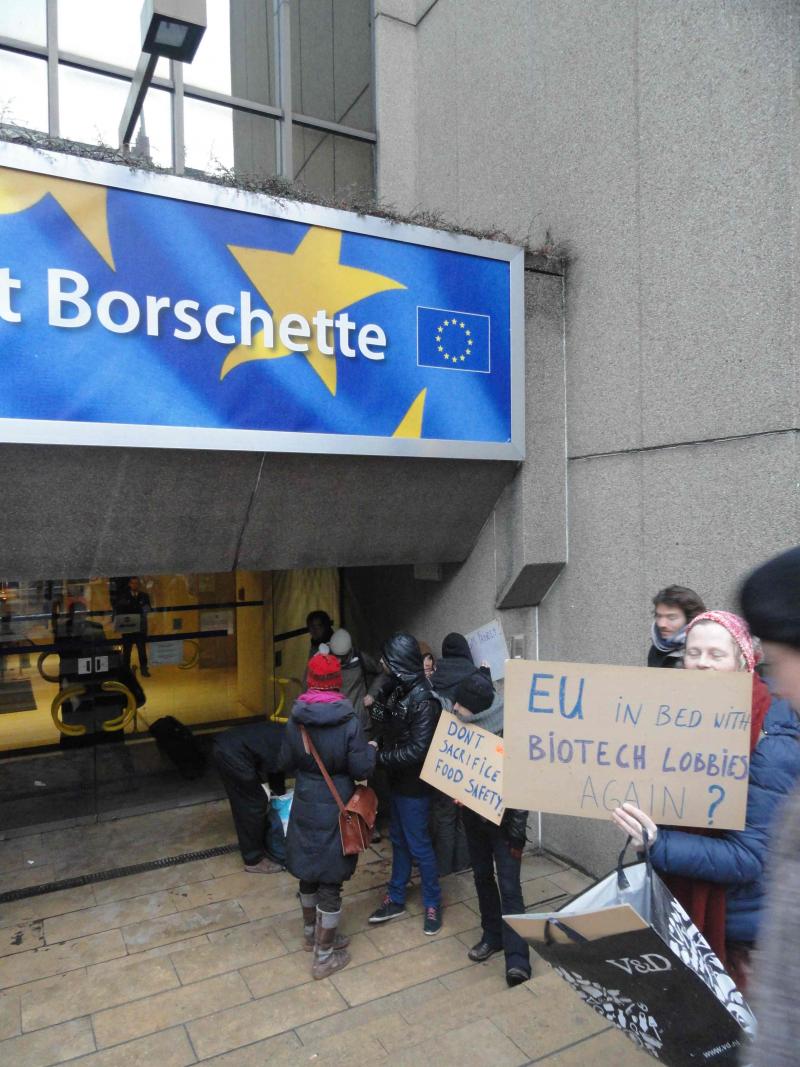 This morning, about 40 activists and concerned citizens handed out flyers to participants to a closed-doors meeting of the Standing Committee on the Food Chain and Animal Health (SCFCAH), gathering representatives of the European Commission and Member States in the Borschette conference centre, rue Froissard 36 in Brussels.

The meeting's agenda contained a key item: the draft regulation which, if voted today, would define how GMOs' harmfulness should be assessed in the EU. This regulation is based on EFSA guidelines which were written by scientists with conflicts of interests with industry: if voted today, the regulation would guarantee that risk assessment protocols used for GMOs risk assessment in the EU are unlikely to detect any undesired effect. The meeting comes at a strategic moment as GMOs risk assessment is one of the key items in the US-EU free trade talks due to be launched any moment soon.

Food and feed safety must be based on science, not on the interests of the biotechnology industry!

Today's closed-doors meeting of the EU's Standing Committee on the Food Chain and Animal Health (SCFCAH), involving only officials of the European Commission and Member States, will deal with a crucial text: a regulation describing how the potential toxicity of GMOs should be assessed [1]. Based on EFSA guidelines written by scientists with conflicts of interests with the biotechnology industry [2] and vaguely improved by the Commission, the current draft regulation is flawed and will only make sure that risk assessment protocols used for GMOs risk assessment in the EU are unable to detect any undesired effect: studies on rats are only required to last 90 days (when recent studies indicated severe effects only appeared after at least a year, leading numerous scientists and national experts to call for longer studies than these industry-favoured 90 days[3]), and “stacked” crops (GM crops with several genetical modifications) are spared separate testing.

But even though these protocols are flawed, they remain comparatively better than those used by industry to evaluate the 27 GM crops whose authorisation is currently pending in the EU system[4]. However, this regulation does not apply to these. Why such haste in deciding on useless food safety protocols? One answer could be free trade: the European Commission strongly pushes to sign a USA-EU free trade deal, hoping it will help the EU out of the ongoing crisis; but GMOs risk assessment is a key point in the debate5, because the US' GMOs risk assessment regime is even weaker than the EU's and the US do not want to risk undermining the interests of their biotech companies.

However, we consider that sacrifying our health and our environment to short-term trade objectives and the irresponsible greed of biotech companies is not an option.

3 Séralini's study on rats fed with Monsanto GM corn, also on the meeting's agenda, has been dismissed in a coordinated effort by EFSA and national food safety agencies; however, many independent scientists and strong minority opinions within Belgium, France and Germany's food safety agencies acknowledged the quality of the study's design and its relevance to the subject, calling for similar long-term studies.

4 These studies' statistical power is way too low to enable any meaningful toxicity conclusion and would not even pass the weak requirements foreseen in the regulation.