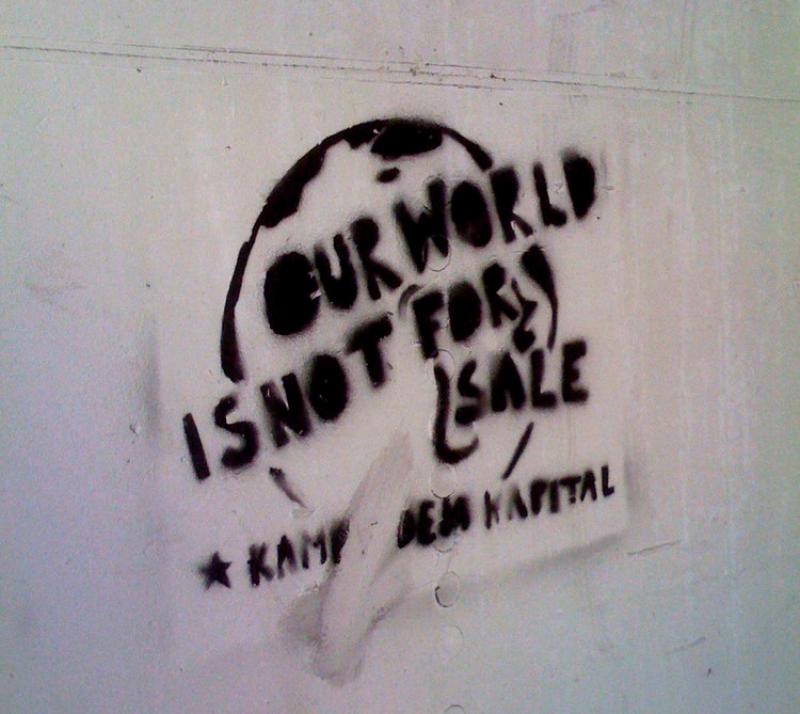 Today, as governments meet in Geneva to negotiate a proposed Trade in Services Agreement (TISA), Corporate Europe Observatory, together with 340 other organizations representing hundreds of millions of people from nearly every country, called on governments to abandon the talks. Among the endorsers were 42 major international and regional networks, such as Public Services International (PSI), UNI Global Union, the European Federation of Public Services Unions (EPSU), the IndustriALL Global Union, the International Union of Food and Allied Workers (IUF) and the European Attac network.

Here's the English (French, Spanish) version of the letter:

We, the undersigned civil society organizations, representing hundreds of millions of members across the globe, are writing to express our strong opposition to the negotiations towards a proposed far-reaching plurilateral “Trade in Services Agreement (TISA)”.

The TISA negotiations largely follow the corporate agenda of using “trade” agreements to bind countries to an agenda of extreme liberalization and deregulation in order to ensure greater corporate profits at the expense of workers, farmers, consumers and the environment. The proposed agreement is the direct result of systematic advocacy by transnational corporations in banking, energy, insurance, telecommunications, transportation, water, and other services sectors, working through lobby groups like the US Coalition of Service Industries (USCSI) and the European Services Forum (ESF). Notwithstanding several financial, economic, social and environmental crises, the services rules proposed for the TISA replicate and greatly expand upon the same rules that “discipline” government measures and limit policy space for regulation, enshrined in the General Agreement on Trade in Services (GATS) of the World Trade Organization (WTO) and free trade agreements (FTAs), which contributed to those crises.

Strong regulation of and oversight over both public and private services is crucial for democracy, the public interest and development, as well as for the orderly functioning of the services market. We fear that all of these values and goals would be seriously undermined by this proposed TISA.

The deregulation of the financial sector and capital which was encouraged in part through 1990s–era rules of GATS and FTAs led to the recent global financial crisis and the ensuing worldwide wave of recessions. The continued suffering by millions from unemployment and austerity measures reminds us that financial sector re-regulation is essential to rebuild stability and forestall future financial and economic crises.

We denounce the ambition of the RGF to bind further service sectors to the deregulatory GATS-like rules (e.g. in Article XVI on Market Access or Article VI on Domestic Regulation) while legislatures move toward re-regulation. We further reject any plans to adopt new cross-sector restrictions on licensing, technical standards and other domestic regulations (even regulations that affect domestic and foreign businesses alike) that would surpass the existing GATS and FTA rules in restricting governments’ and parliaments’ right to regulate.

We strongly condemn the secretive nature of the TISA talks, in which the citizens, parliamentarians, trade unions, regulating agencies, services users and other interested parties have limited or no access to those who are setting negotiating mandates or to negotiations or negotiating documents, while corporations set the agenda and have easy access to the negotiation documents. We insist that in such negotiations as for the proposed TISA, negotiating texts must be published, and input from regulatory agencies, public service providers and users, parliamentarians, state and local officials, and civil society organizations must be regularly invited. Parliaments and legislatures must set binding terms for such negotiations, which must not go into effect without a full vote of elected officials.

The proposed TISA is an assault on the public interest as it fails to ensure that foreign investments in service sectors actually promote public goals and sustainable economies. We are particularly wary of further undermining of essential services such as health care and insurance, water and energy provision, postal distribution, education, public transportation, sanitation, and others if they are handed over to private and foreign corporations motivated only by profits and available only to those who can pay market rates. Therefore such essential services – including those that operate under a public/private mix, compete with private providers, or charge a fee –should not be subject to any closed-door, unaccountable trade negotiations, including the TISA.

We denounce the intent within the proposed TISA to promote the liberalization of so-called temporary movement of natural persons, who are actually migrant workers, without guaranteeing legal protections for their human and labour rights. The movement of workers is outside the competence of trade agreements and must be dealt with as part of the normative tripartite framework of the International Labour Organization (ILO).

The proposed TISA also poses a threat to countries that are not participating. The European Union and the United States have made clear that their intention is to “multilateralize” the negotiations. We call for vigilance against the determination of the EU and the United States to set the TISA’s hyper-deregulation-and-privatization agenda as the global “norm,” and to pressure other countries into joining, in particular countries that may accede to the WTO. Further, it is not a stretch to consider that once a TISA is concluded, signatory countries would try to act as a bloc in services (GATS) negotiations within the WTO, pushing other countries meet the TISA level of liberalization and deregulation, thus contradicting the services negotiating guidelines that WTO members agreed upon by consensus. We further denounce the TISA as an attempt to advance developed countries’ corporate wish lists for services while abandoning commitments made in the WTO’s Doha Development Agenda to address developing country concerns, such as fixing existing asymmetries and unfair rules on agriculture.

The world is still recovering from the greatest global economic downturn in nearly a century, facilitated by the extreme deregulation of the financial services industry. It is clear that strong public oversight over services is necessary to ensure that the public interest is prioritized over private profit. We reject the TISA that would move our countries in precisely the wrong direction.

See the PDF file for the full list of organisaitons endorsing the statement:

Not every country is
Arabica

Not every country is concerned i can tell