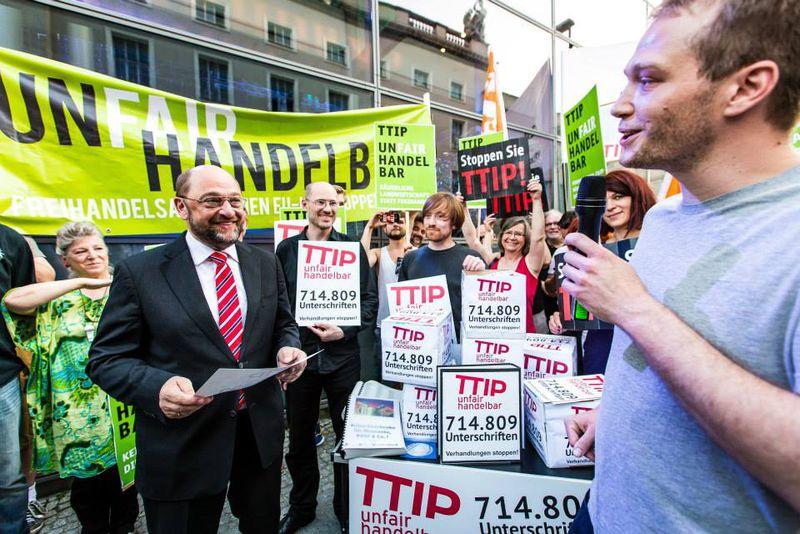 As the dust has settled after the European Parliament elections last month, we're taking another look at the election debates in several member states where excessive corporate influence on EU decision-making and other concerns about the role of lobbying in Brussels became a major theme. We have previously reported on Austria and Denmark, but in Germany and Spain there were also big breakthroughs in the level of debate about these important problems.

In Germany, the controversial EU-US trade and investment agreement (TTIP) became one of the major themes in debates in the run-up to the European Parliament elections. Many in Germany, rightfully, consider TTIP to be a major threat to high-level health and environment standards and a direct result of far-reaching corporate lobbying influence over EU trade policy-making. Throughout the election campaign period, there were lots of initiatives to get MEPs to show where they stand on TTIP. A few days before the elections, the leading candidates were presented with signatures of more than 715,000 German citizens who demanded a halt to the TTIP negotiations.

Ten days before the elections, CEO's Pia Eberhardt debated TTIP in a televised debate on German public TV with Martin Schulz, plus Green and Conservative MPs. The 75 minute talkshow generated lots of attention as can be seen from the over 700 comments on the blog by the show's host Anne Will.

It was not only TTIP that became a hot election campaign issue, but the wider problems around lobbying in Brussels also generated lots of attention in Germany. This included media articles in large and small media, ranging from national radio Tagesschau to local newspapers like Zollern-Alb-Kurier. Süddeutsche Zeitung published an impressive in-depth dossier on the role of lobbying in decision-making of the parliament and the European Commission, with a focus on tobacco legislation.

Der Spiegel, shortly before the election, published a hard-hitting article criticising Spitzenkandidat Schulz, in his role as European Parliament president, for failing to enforce the Parliament's ethics rules.

All of this no doubt contributed to the fact that almost 240 German MEP candidates, by far the highest number anywhere in Europe, signed the Politics for People pledge, an initiative of the ALTER-EU coalition. The candidates promised “to stand-up for citizens and democracy against the excessive lobbying influence of banks and big business.” 96 of these candidates were elected MEPs, which means 44 per cent of the MEPs elected in Germany have signed the pledge!

In Spain there was also significant media attention for excessive industry lobby influence in Brussels, for the first time ever. Major newspapers such as El Pais, El Mundo, and El Diario ran in-depth articles on tobacco industry lobbying, weak transparency and ethics rules and other problem areas. Civil society groups including AccessInfo organised a range of activities calling for stricter regulation of EU lobbying, included a well-attended election debate in Madrid. As a result, 130 Spanish MEP candidates signed the Politics for People pledge of which 17 were elected. Overall, one third of the new Spanish MEPs are committed to the ALTER-EU reform demands. At least seven of the Spanish parties elected into the European Parliament also had stricter regulation of lobbying included within their election manifestos. This includes newcomer Podemos, the party emerging from the Indignados movement, which surprised everyone by getting five MEPs elected.

In total 1338 candidates from all 28 EU member states signed the Politics for People pledge, 174 of whom were elected. This is exciting and provides a solid opportunity for the new European parliament to take serious measures to tackle corporate lobbying. The ALTER-EU coalition has already sent a welcome letter with suggestions for what these MEPs could be doing in the first months to help reign in excessive industry lobbying influence. This includes efforts to secure that transparency and ethics champions are elected to key positions in the European Parliament. In the previous parliament, both the Parliament's president Martin Schulz and the vice-president for transparency Rainer Wieland lacked political will to secure lobby transparency and prevent conflicts of interest and undue influence.

A next key challenge will be the approval hearings for the new Commission president and the whole team of Commissioners, which are expected to happen in July and September (but could suffer delays). The Barroso II Commission was a serious disappointment, but MEPs will have the opportunity to grill incoming Commissioner candidates to insist that the next Commission commits to strong initiatives to tackle lobbying secrecy, the 'revolving door', industry-dominated advisory groups and other key problem areas.