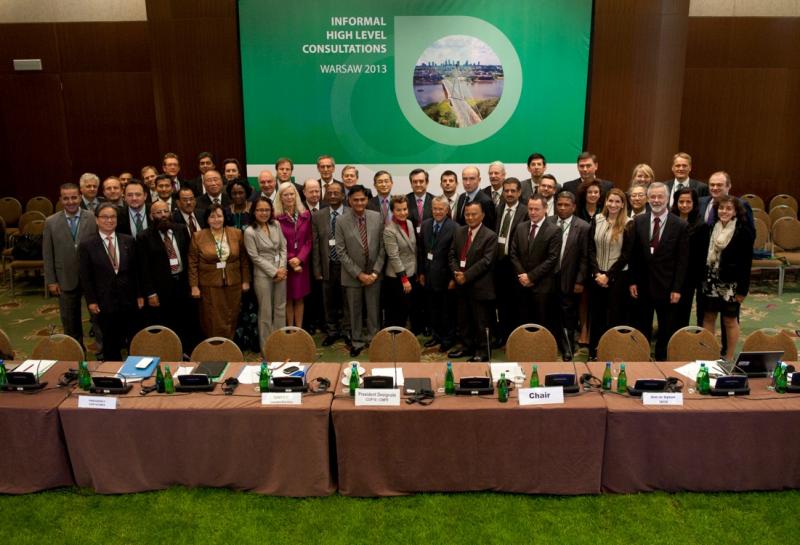 Next month's UN climate talks in Warsaw, aka COP19, will be remembered as 'the Corporate COP'. While the international climate negotiations have become progressively more oriented towards the needs of big business – and less around the needs of the climate – this year it has reached new heights, in particular the 'pre-COP' organised by Poland's Minister for Environment Marcin Korolec: dirty industry were invited to precook the negotiations before it has even begun. What's more worrying is that Korolec and the UN want to make such blatant corporate capture a permanent fixture at all talks.

Last week's 'pre-COP' saw around 40 ministers and negotiators meet for three days with representatives from big business. Some of the most polluting, climate-damaging companies were present, including chemicals giant BASF, cement producer Cemex, builder of Poland's biggest coal plant Alstom and Poland's biggest coal, oil and gas company PGE. Also present were corporate lobby groups like employers federation BusinessEurope, their Polish counterparts Lewiatan, the American International Business Council and the Brazil National Confederation of Industry, all of whom have been lobbying against tougher climate regulations.

As already reported on this blog, the meeting to decide this November's negotiating agenda was an invite only affair for government and business, with civil society excluded. So no public scrutiny, no accountability, and only the Minister's own conclusions to indicate what was discussed. But Korolec, in his post-meeting comments, saw that as a good thing:

“I am very much satisfied with the meeting. We had an honest and open dialogue among the ministers, which is only possible to achieve at closed, unofficial sessions.”

An elected government minister, who is also the incoming President at this year's climate talks which affect the entire world, embracing secrecy and privileged access, with not a hint of irony. Reading the official post-meeting conclusions, the clear themes were how to increase business participation in the negotiations (as if they weren't already heavily involved), climate finance and a future agreement. All key questions, and all highly contested between civil society and the business community.

The future of the Green Climate Fund was discussed in the meeting, with references to innovative ways to 'mobilise' the 100 billion US dollars. But such a highly controversial topic needs both sides of the argument present, rather than just the business case being made for private finance and the new market opportunities it presents. This didn't happen, as civil society was excluded.

Business also used their privileged access to warn about the risks of carbon leakage, i.e. the possibility that tougher climate targets in some countries lead businesses to relocate elsewhere with laxer regulations. This is an argument that has been seriously misused in the EU by heavily polluting industry to push governments into avoiding new measures. It was successfully used first to defeat a carbon tax, which instead led to the EU Emissions Trading Scheme (EU ETS); then to stop any tightening of the EU ETS cap; and finally to secure excess emissions permits – for free – which are worth very large sums of money (ArcelorMittal currently has €1.6 billion worth of unused permits). In the global climate talks, business wants to avoid any country making commitments unless all other competitors – including so-called emergent economies – take on the same commitments, as otherwise they would be disadvantaged. This is part of the explanation behind the weak positions and lack of ambition of the EU and US, who are constantly being threatened with job losses from corporations leaving to laxer regulatory regimes, despite the lack of evidence.

A question being asked throughout civil society and by anyone who has seen how polluting fossil fuel companies are, is 'why should the UN increase big business involvement in the climate talks?' It's a very valid question, and one Environment Minister Korolec answers when justifying why, for the first time in pre-COP history, business is invited to a meeting strictly for negotiators.

“According to our experiences to date, without their commitment, we will not be able to reduce greenhouse gases emissions in an effective manner. It is the industry that has the knowledge and tools required to reduce emissions efficiently. As an important party in the action against climate change, business has to participate in the negotiating process.”

Yet the experience of those following the talks over the years is the complete opposite: it is because the increasing commitment of business to be present in all areas of negotiations – alongside its firm grip on many national negotiators – that the climate talks have failed to be ambitious, failed to see rich industrialised countries take the lead and accept their historical responsibility, and failed to deliver genuine solutions that tackle emissions at source. Instead we see 'business-friendly' solutions like carbon markets that do nothing to tackle emissions but make polluters incredibly rich. Structural solutions are kept off the table, as are plans to keep fossil fuels in the ground, while people and the environment – particularly in the global South – suffer.

It is incredibly dangerous – for the planet and the negotiations – if leaders continue to parrot the same mantra of business not having enough influence at the talks, particularly the dirtiest big businesses. The interests of coal and gas companies, steel companies and monoculture plantation owners are not the same as the general public, affected peoples or the climate. In fact, the opposite. Therefore rather than embracing the role of business in the negotiations, we should be distancing ourselves, recognising the clear conflict of interest, and putting the interests of people and the environment first.

The UN, far from challenging this worrying trend and championing the billions already suffering from climate change, is supporting it. UNFCCC President Christiana Figueres will open the first panel at Climate Solutions, a two day meeting organised by the World Business for Sustainable Development and World Climate ltd (strong advocates for business-friendly market-based mechanisms), which will host the now-traditional 'Business Day'.

Other parts of the UN are also having a negative impact. Perhaps unsurprisingly, the highly-controversial Global Compact has been pushing for greater business involvement. Widely criticised by CEO and others for allowing some of the worst corporations to wrap themselves in the UN flag, the Global Compact gives a seal of approval to businesses for signing up to a loose set of non-binding and non-enforceable principles on social, environmental and human rights. However, in the run-up to COP19, a Global Compact Network Representative in Poland, Kamil Wyszkowski, said it was the UN that had asked the Polish government to involve business more actively in the negotiations. And when he and Korolec were asked why civil society groups do not have days at the pre-COP as business do, the Polish Environment Minister responded that COPs were traditionally 'feast days' for civil society and that NGOs have always been present, in contrary to business.

This is a very common argument being made by business representatives at the negotiations, but to hear it from the incoming President of the UN climate talks is as worrying as it is untrue. Business has been a constant presence at previous COPs and intersessionals, and has steadily lobbied for – and succeeded in securing – a bigger and more influential position. Having unrivaled access to negotiators and ministers before the talks attests to that, and this blog will also feature more examples. But a feast for NGOs? There are hardly more depressing meetings than COPs, watching as corporate power and a lack of political will block the path the UN should be taking.

Business to be in the driving seat – for the foreseeable future

Not satisfied that the Polish Presidency of the UNFCCC will oversee the most corporate captured COP ever, Environment Minister Marcin Korolec wants a legacy: he announced at the pre-COP meeting that bringing together business and negotiators to precook the talks before negotiations begin should become a permanent fixture.

“The incoming President indicated his intention to turn business community involvement in the process permanent starting with COP19/CMP9/... We will work with the future COP Presidencies, in order to ensure that they continue this practice.”

So this may be the start of a whole new world of corporate-influenced COPs, of the UN encouraging it, and of dirty, polluting climate criminals being given direct access to decision makers. Or, standing up to big business influence in Warsaw could have it remembered as the last climate negotiations where business enjoyed such privileged access. The next COPs – in Peru and then France – will be litmus tests, but it needs to start in Poland.