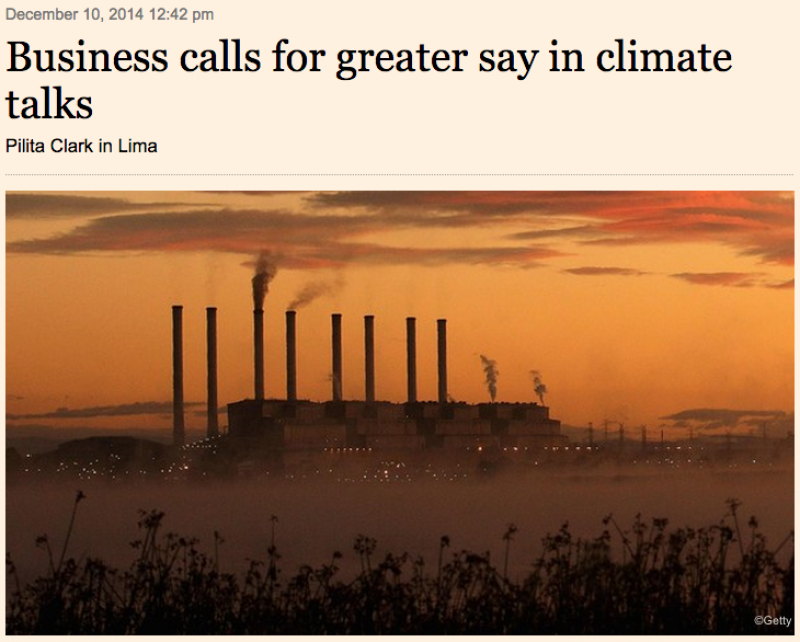 Business wants a seat at the climate negotiating table

The UN climate talks in Lima, COP20, have had the pervasive influence of business all over them. Yet despite this, business is still not happy with the influence it has on the talks and wants a greater role.

The Financial Times ran a story with business leaders demanding a greater role in the climate talks as we approach the 2015 Paris summit. James Bacchus, trade expert at the International Chamber of Commerce (ICC) who was previously at the World Trade Organisation (WTO), said:

The UN's response was to say it was already bending over backwards to accommodate the 'pivotal role' played by business. Spokesperson Nick Nuttall went as far as saying:

“The private sector is no longer an outsider at these [climate talks], but is increasingly part of the landscape and a source of inspiration, ideas and supportive action”

Nuttall is right – Lima has been another display of the corporate capture seen at the UN talks in Warsaw, with business firmly on the inside (see other entries in our Polluters in Peru blog). And the same big businesses responsible for driving the climate crisis are standing in the way of making progress, pushing us towards a weak deal.

But Peter Robinson, Chief Executive of the US Council for International Business, does not think industry influence goes far enough, and has called for businesses to be granted 'co-party' status in the negotiations, rather than just observers.

“We want to find an opportunity where we are more inside the tent than on the sidelines,”

To be clear, if business was granted co-party status – i.e. the same status as governments (known in the UN as parties), they would not just be at the negotiating table, they would be writing the text.

Given what's being pushed by those in Lima – experimental and expensive pie-in-the-sky carbon capture and storage technology, fossil fuels, more carbon markets despite the failed experiments, etc. – this could only be disastrous. Unfortunately these solutions are already gaining ground in the UN, and are the complete opposite of what people around the world were demanding at the climate march in Lima.

“We are concerned that we are not as fully engaged now as the world needs us to be,”

But this comes from a very dangerous and misguided belief – one shared by many of our business leaders also – that what is good for big business is good for the rest of society and the planet, and that business should come first. Robinson adds:

“If a global agreement on climate change doesn’t work for and with businesses, it just won’t work,”

Ironically, neither Robinson, nor Bacchus actually speak for the business community – let alone the rest of us. The interests of small and medium enterprises (SMEs) are not represented by either business leader, nor are those of wider society and the environment, let alone those communities already affected by climate change and continued extraction. They represent and are accountable to the shareholders of and bottom lines of their biggest members – the carbon majors and the banks that fund them.

The climate negotiations are supposed to be between governments who represent their people (obviously not always the case), with supposed mechanisms of accountability (elections). Governments already represent the interests of business – often over the interests of other parts of society – so the idea of giving business an even greater role in negotiations is an insult to democracy and to the very idea of the UN.

Friends of the Earth International was so appaued it wrote a response:

Sir, The demands by industry leaders for a “greater say in climate talks” (FT.com, December 10) insult the very concept of Human Rights Day. Corporations that pollute the atmosphere enjoy billions of dollars in subsidies, representation in many government delegations and invitations to UN panels as experts. International protection of corporate interests and investors’ rights has time and again crippled responses to the climate crisis, impeded justice for human rights violations by resource extraction companies and stamped a polluter’s bill of rights over the voices of people.

Business does not need more representation in the climate negotiations — it has no business being here in the first place.

The fossil fuel industry is becoming an increasingly visible target at the COPs (the UN climate talks), with this year youth joining representatives of affected communities to tell them to get out of the COP and away from our governments. Following the action, 350.org launched a petition with the same message and got almost 60,000 people joining the call to #GetTheFFout.

If there was ever a clearer response on whether business – and the fossil fuel industry in particular – should be invited to the negotiating table, 350.org's Hoda Baraka summed it up perfectly:

“The fossil fuel industry is actively lobbying against climate action and standing in the way of progress. When you’re trying to burn the table down, you don’t deserve a seat at it.”