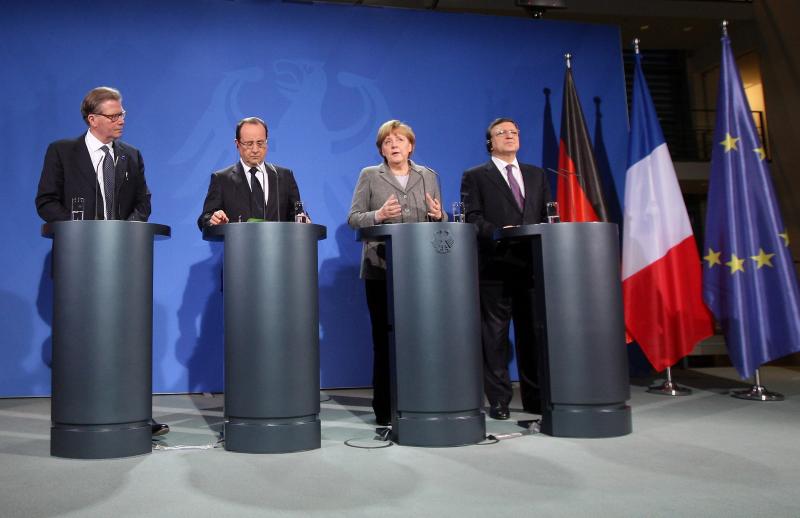 Cracks in the armour

Last December’s EU summit was to agree on a controversial new policy tool of “contractual agreements” to make EU member states stick to a course of neoliberal reform. But internal rifts in the Council are delaying the project, providing trade unions and other social movements with an opportunity to stop the flood of attacks on social rights.

The December 2013 EU summit was originally set to agree on “the main features” of a new tool on economic policy, known as “contractual arrangements” or quite simply “contracts” on economic policy. The contracts are to promote “structural reforms” in eurozone member states, such as reforms of labour markets, to ensure the “competitiveness” of companies and of the overall economy – reforms that needless to say benefit business elites and enact another blow to workers rights. . Obligations which “in many ways echo the ‘memorandums of understanding’ that now are forced on bailout countries like Greece”, as the Financial Times put it, are to be imposed on all Eurozone member states. The main proponents seem to be an invincible group, with the German and French governments teaming up with major business lobby groups like BusinessEurope and the European Roundtable of Industrialists.

But over the past few months it’s become clear that this move will not be as easy and smooth as earlier reforms of “economic governance”. Despite a mighty alliance between the German and French governments and strong support from the business lobby groups, many member states are hesitating and expressing doubts about further boosting the power of the Commission over their own economic and social policies.

This provides social movements with an opportunity, particularly those who have the most to lose in this connection: the trade unions.

These contracts are to be the next step towards common rules on economic policies at the EU level, geared towards promoting neoliberal "reform" in a new and potentially groundbreaking way in that they will provide a weapon to attack social rights that currently can only be targeted indirectly. And if you ask Angela Merkel, the objective is simple: to have other member states introduce the same kind of sweeping attacks on labour and social expenditure that Germany undertook a decade ago1.

The basic idea is as follows: member states are encouraged to conclude an agreement with the Commission. In this contract a number of specific reforms are to be mentioned, reforms that the member state in question will have to implement. To support the reform process, the state will receive some sort of financial support from the EU, either in the form of loans or grants.

What kind of reforms would they be? The conclusions of the December 2013 summit give us a wide outline of their ambitions, aiming for: “a broad range of growth and job-enhancing policies and measures, including the performance of labour and product markets, the efficiency of the public sector, as well as research and innovation, education and vocational training, employment and social inclusion.”

While on the face of it this may seem like a broad and mixed basket of objectives, the reality is that from the beginning, the reform contracts were supposed to solve a very particular problem: that “structural reforms” of the labour markets cannot be easily imposed through existing EU rules as its competence is limited. The Commission is using every given opportunity to find ways around this lack of competences, as clearly it is creating obstacles to ambitions to attack wages and 'flexibilise' the EU's labour market in ways friendly to business interests. That’s why, from the outset of the debate on the contracts, the Commission – supported by big business – was mainly interested in labour issues. In the Commission’s “Blueprint” of November 2012, written to chart the way to a “deep and genuine” Economic and Monetary Union, “reforms” of the “labour market” are a key priority. One example from the text is instructive: “The financial support should be designed as an overall allocation to be used to contribute to financing measures flanking difficult reforms. For example, the short-term impact of reforms raising the flexibility in the labour market could be accompanied by training programmes financed in part through support...”. In other words, the EU could offer financial support to training programmes to make it easier for people to accept getting laid off.

Since then, negotiations and discussions have taken place inside the Council in a designated working group. Here, disagreements have surfaced over whether the contracts should be supported by “loans, grants, or guarantees”, ie. whether a member state is to receive money from other member states, or merely be allowed to borrow money. Another disagreement is over the scope of the contracts, and yet another is about decision procedures. And then there's a very fundamental one: whether it is even desirable to have Brussels play a bigger role in determining member states economic policies. Southern European countries are sceptical if not opposed, and so are several other governments, including the Dutch and the Belgians.

Despite the emerging opposition to the basic elements of the proposed “contracts”, in at least one respect, the model now preferred by the proponents, is more comprehensive than the one envisaged by the Commission. In the Commission’s version, only member states experiencing serious “macroeconomic imbalances” were to sign contracts. In the proposal that is now on the table, all Eurozone member states (plus others who opt in) are to sign a contract. That would make the contracts a far more important instrument, and a major step towards a common economic (and social) policy – firmly based on a neoliberal approach.

In this case the core proponents of the contracts – be it the Commission or the German Government, show no inclination to compromise or water down their ambitions. There may be a space for negotiating the form of financial support, but as for the broader scheme, its proponents are going for the maximum. With opposition growing inside the Council, then, the contracts appears to be a fragile project that can be defeated. But that would take a coordinated effort of the European trade union movement and other social movements. As it stands, the final decision on the contracts will not be made this side of October:there’s still time to make a difference.