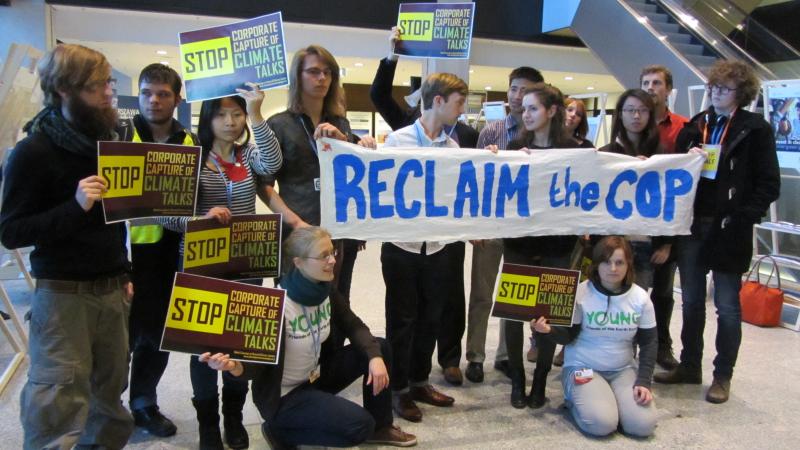 Diary of a Corporate COP: how polluting industry is presenting its false solutions at COP19

At the end of week one of the UN's 19th climate conference, and after thousands of people have today marched through Warsaw demanding real, just, effective and ambitious climate action, we take a look back at some of the polluters' propaganda events that have been happening inside, and outside, COP19.

BusinessEurope, the European Commission and the Polish fossil lobby

The beginning of week one of COP19's corporate party brought an official side event inside the COP, on 12 November, called 'Low Emission Poland? Yes we (do) care!' It was organised by Forum of Gas and Electricity Receivers (yes, a massive gas and fossil fuel lobby), Forum CO2 (a Polish business and heavy industry club) and the Polish Ministry of Environment (the host of the climate talks and better known as the ministry of coal). The event attempted to portray the Polish government, ahem, as a friend of the climate. Present was not only the European Commission's Hans Bergman, from DG CLIMA, but none other than the European employer's federation BusinessEurope's very own Nick Campbell. Who – as you can read about in our COP19 lobby guide – is the head of notorious climate-action blockers BusinessEurope's climate change working group. Oh, and he works for chemicals giant Arkema. And did we mention that he used to simultaneously chair the climate group of chemicals lobby CEFIC and the Climate Change Task Force of the International Chamber of Commerce (ICC)? All of which lobby for false solutions to climate change: unjust and ineffective carbon markets that make the rich polluters richer and no less dirty; unconventional fossil fuels like environmentally and socially destructive shale gas; against binding or ambitious targets and mechanisms on emissions reductions or energy savings; and, of course, for the protection of their monopolies through intellectual property rights.

No surprise then that having infiltrated the COP, in an official side event, Campbell's message was about how industry is already doing its part, how important competitiveness is and that a low electricity price is crucial to that. Oh, and that the EU's flagship climate policy, the Emissions Trading Scheme (ETS, which has brought millions of euros in windfall profits to big business and industry whilst allowing them to continue without making domestic emissions reductions – see Carbon Markets box in the lobby guide) is already tough enough. As far as Campbell is concerned, you'll get competitiveness by getting a global agreement – by which he really means, a global agreement that treats all countries the same – in other words, one that ignores historical responsibility and climate justice, and so is not only unfair but in practice impossible. Because countries in the global South who are suffering most from climate change but did least to cause it would never accept such an unjust agreement.

Chemical industry lobby CEFIC was also on the panel, with its executive secretary William Garcia reiterating that the key word is competitiveness, and realism, and of course, making threats about carbon leakage from Europe. A threat for which, by the way, there is no evidence of, nothing to show that industry/ business is leaving or would leave the EU because of its climate and energy policies. But that didn't stop another panel member, hard right Polish ECR MEP Konrad Srymanski from insisting that Europe has already delivered so much, and that setting any kind of ambitious emissions reduction example is just ridiculous (climate justice, I hear you say?). According to Srymanski, it doesn't help, it is economically harmful, nobody is following “us” (Europe) – in fact, they just want to free-ride on our reductions!

Later the same day another official COP19 side event in the Warsaw stadium, this time organised by prominent Brussels think tank the Center for European Policy Studies (CEPS), which, if you read our lobby guide ('COP19 Policy Debates: The push for expanding markets' box) you'll discover is the architect behind the EU's position on carbon markets. So it was again no surprise that their discussion “The role of the Framework for Various Approaches (FVA) in the 2015 international agreement” was not so much about various approaches, but was dominated by markets, markets and more markets. The FVA is a proposal for a set of non-market and market approaches to climate mitigation, but which could pave the way to a global carbon market by enabling trading between different emission trading schemes, developed with different rules, outside of the UNFCCC. CEPS' event explained that it was thanks to the EU's example (of an emissions-useless, but business-profitable) ETS, that lots of countries are now thinking of how carbon markets could effectively(!!) and efficiently(!!!) reduce their emissions. This business-interest steered propaganda however ignores all the evidence from carbon markets' track record, and pushes a model that is antithetical to the climate debt owed by the rich to those people and countries who did least to cause the problem but are most affected by it. And which attempts to put a price on, and profit from, ecological services such as carbon sequestration. Leading to the privatisation of the atmosphere – a common good (See 'Carbon Markets' box in our lobby guide for more details).

Meanwhile, at the Warsaw Stock Exchange...

Thursday 14 November brought a trip outside the climate talks' conference centre, to the Warsaw Stock Exchange, to an event coordinated in tandem with the COP, entitled 'Sustainable investment: exploring strategies for resource efficiency and economic growth'. Intended for “leading investors and business figures to discuss how sustainable investment can be the driving force behind long-term economic growth” in a context where “climate change could contribute as much as 10% to portfolio risk over the next 20 year, however investment opportunities in low carbon technologies could total as much as $5 trillion” - i.e. its a great business opportunity! Introduced by the Carbon Disclosure Project (CDP) – a “business sustainability” monitoring group - the message was indeed that business is not doing enough to prevent a 2 degree temperature increase (right so far) but that pricing carbon and markets is how we can stop catastrophic climate change, which can be a profitable exercise for business (...and you were doing so well!) Our old friends and masters of the spin that big business and polluting industry are part of the solution rather than the problem, the World Business Council for Sustainable Development (WBCSD – see their entry in the guide) was there to tell us about how we need to go back to what science says and do what's appropriate to it, as well as the importance of measuring risk and reporting on sustainability. Oh, and that we need regulation that impacts all equally, so that competitiveness is all the same (do I need to say climate justice again?), and definitely not regulation that is a “politically correct reaction to something.”

Then, we heard from another of the event's sponsors, Green Cross Poland – the greenwashing NGO of Poland's richest man Jan Kulczyk (worth around 2.6billion euros), whose fortune comes from his companies' exploitation of coal and fossil fuels. Kulczyk is one of the brains behind coal industry lobby group the Central European Energy Partners (CEEP), which has pushed for the scrapping of EU climate policy and replacing it with incentives for new, more-efficient coal plants (see Lotos Group entry in the guide). Kulczyk is also the might behind Green Cross Poland, an “environmental NGO” that pushes for business as the solution to our environmental problems and the so-called “green economy” (pretty much growth-based business as usual, with a few nice words about sustainability thrown in, and a dangerous push towards bringing other areas of nature – such as biodiversity or water – under the logic of markets, as with carbon. See 'Green economy and technology focus' box in the lobby guide). GreenCross Poland was represented by its vice-president Dominika Kulczyk-Lubomirska, and Kulczyk's daughter. Her message was that “it is not politicians we should be talking to about ecological problems but business”, but because “business is business, you have to show them that being green is more profitable”.

From the Warsaw Stock Exchange back to the COP19 venue for a chemical industry propaganda show. An official side event hosted by CEFIC and ICCA (the European and International chemical industry associations) – with a little help from Dow Chemical (remember Bhopal, anybody?) - entitled “Accelerating Climate Solutions: Technology & Policy Options for Reducing Energy Use & GHG Emissions”. The event told attendees of our international climate talks that we need cheap energy and carbon, in a broad energy portfolio which includes nuclear energy (with its unacceptable risks and radioactive waste) and “game-changer technologies” like Carbon Capture Storage (i.e. new coal power with the hope that an as yet unproven technology not expected to be commercial until 2030, if at all, will keep CO2 emissions underground) in order to stay within 2 degrees temperature rise. With a lot of focus on energy efficient and low energy buildings (a very important part of reducing energy consumption) the chemicals industry did a very nice job of appearing to be a climate friend – when their business model and lobbying record – including pushing for shale gas, intellectual property and against recognition of historical responsibility, which would distort competition – show them very clearly to be a climate foe. (See CEFIC entry in the lobby guide).

This is just the tip of the (melting) iceberg. There were many other corporate lobby events both inside and outside the conference centre in the first week of the climate talks, and there will be many more next week. Added to that, the names of the polluting corporate partners are plastered all over the conference stadium, and free conference bags and notebooks are branded by the worst Polish coal and gas companies PGE and Lotos, both partners to COP19. Walking the corridors of the COP you'll pass exhibition stalls belonging to the likes of the International Atomic Energy Agency (IAEA), International Chamber of Commerce (ICC), International Emissions Trading Association (IETA), World Business Council for Sustainable Development (WBCSD), International Petroleum Industry Environmental Conservation Association (IPIECA) (see the lobby guide entries for these lobby groups and the false solutions they're pushing) as well as the International Civil Aviation Organization (ICAO) and the International Gas Union (IGU).

With the second week still to go, and most of the major decisions yet to made, our diary of a corporate COP shows yet again how the Polish government, hosts of the climate talks in Warsaw, is putting polluting corporations in an even more privileged position. Making the UN climate talks resemble, more than ever, a business fair. One which is attempting to outsource the solution to the climate crisis to the same corporations that have a vested interest in continuing to burn fossil fuels.

This story is part of our blog Corporate COP19. Read all the other stories here.
For comprehensive background information, check out the COP19 Guide to Corporate Lobbying.
For the latest, follow in Twitter: #CorporateCOP19 , @pascoesabido , @ecospaceship