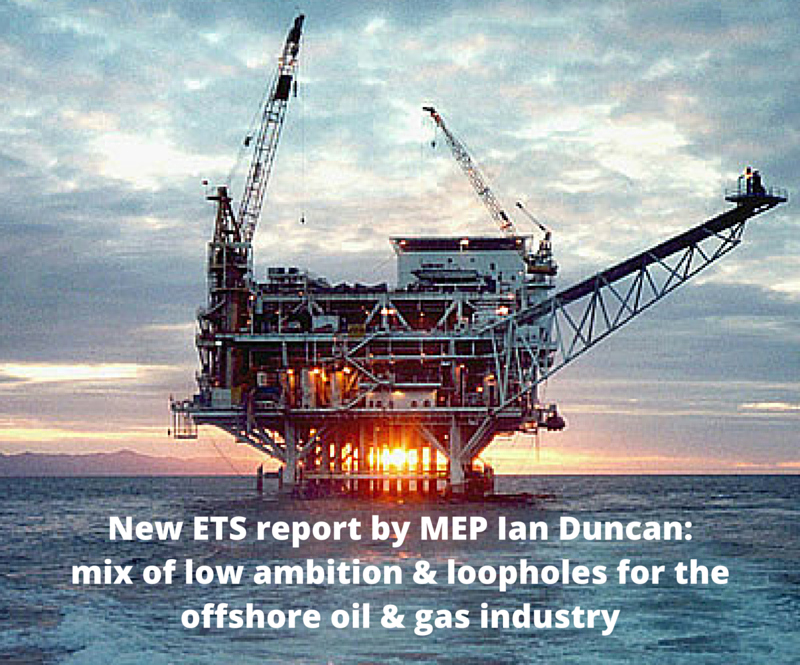 The EU ETS should “adapt to the new targets” in the Paris Agreement, according to Ian Duncan MEP, the European Parliament environment committee rapporteur on emissions trading. But his draft report does nothing to “pursue efforts to limit the temperature increase to 1.5 °C above pre-industrial levels.” The ETS is supposed to cut 43 per cent of greenhouse gas emissions in the sectors it covers by 2030, but it should aim to reduce double that amount if the EU is to take its fair share of even a 2°C climate goal. Instead of revising an inadequate target, and despite the Paris Agreement suggesting an initial evaluation in 2018, Duncan's report postpones any discussion on raising climate ambition until after 2023.

More broadly, emissions trading ensures that greenhouse gas emissions targets are treated as a ceiling on climate ambition rather than a floor. There is no incentive for countries to put in place policies that would encourage companies to over-achieve the target because that would simply open space for companies in other countries to emit more.

Over 80 per cent of identified fossil fuel reserves need to be left in the ground to remain within a 2°C climate goal, with even more than that required to reach a 1.5 °C target. Yet Duncan’s report proposes a massive new loophole for offshore oil and gas producers that could save North Sea operators around €1.9 billion (£1.5 billion). The idea is to give offshore oil and gas platforms free emissions permits to cover the electricity they produce for their own use – a measure lobbied for by BP, Shell, Eni and the International Oil and Gas Producers industry association. The report also includes measures that would make it easier for offshore platforms to access “innovation” funding for Carbon Capture and Storage (CCS).

Duncan’s sympathy for the oil and gas lobby should come as no surprise. He has previously boasted of his role in amending EU law “to ensure that onerous emissions reduction targets do not apply to offshore installations”, and that his “energy priorities” include ensuring that “the EU must not pass law that threatens Scotland's oil and gas industry.” To keep Duncan and his fellow lawmakers on track, the EU’s main oil producers spend millions of euros on lobbying every year.

The European Commission’s draft of a new emissions trading directive, published in July 2015, was a massive boon for polluters. It suggested that only 57 per cent of emissions permits would be auctioned, handing out the rest for free in a giveaway worth up to €160 billion.

The Duncan report suggests even more loopholes for polluters, potentially reducing the share of permits auctioned to 55 per cent, and extending the scope of free permits in the power sector in Central and Eastern Europe.

It also gives Central and Eastern European (CEE) governments far more control over funds to “modernize” their energy systems. This relates to both a new Modernization Fund, and a compromise (“article 10c”) that allows CEE governments to hand out free allowances to power producers in return for plans to modernize and diversify. But this programme has a poor track record, with up to €12 billion invested in extending the lifespan of coal powered electricity generation rather than transforming the energy system.

·      Energy and climate policies that “impact” the ETS could be weakened

The Duncan report suggests that European Commission monitoring of the carbon market could be used as justification to introduce “measures to limit the impact of overlapping Union-wide energy and climate policies.” This lays out bluntly the contradiction between the EU ETS and more effective forms of regulation. In the name of protecting the carbon price, legislation to control industrial pollution, increase energy efficiency and renewable energy, and tax fossil fuel energy have been attacked and weakened. Rather than defending the failing ETS, the EU should be strengthening a range of other policies and regulations that would do a better job of limiting climate change.

In short, the Duncan report does little to address the fundamental flaws in the ETS, and has even opened new loopholes at the behest of the oil industry and other lobbyists. Far from righting the sinking ship, it reinforces the toxic mix of low ambition and polluter subsidies that have beset emissions trading since the outset.