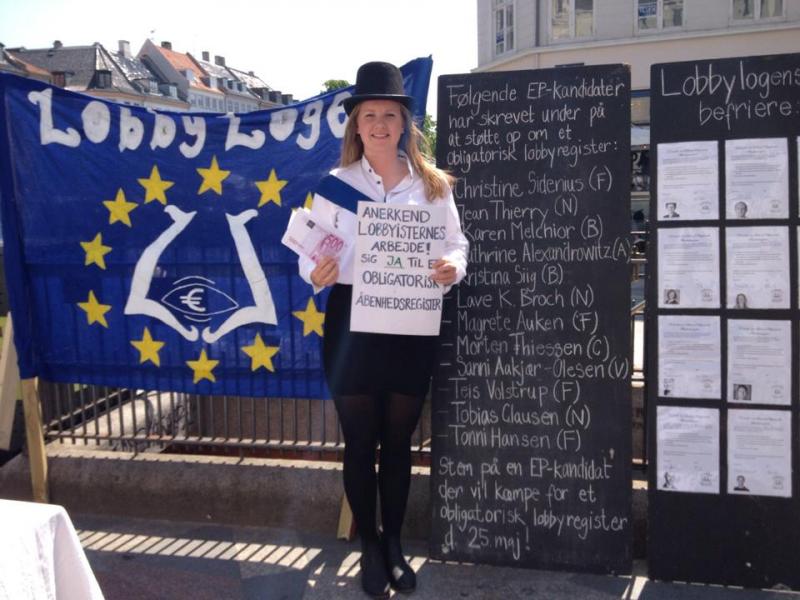 Secretive lobbying, excessive corporate influence on EU decision-making and other concerns about the role of lobbying in Brussels have become a major theme in the European Parliament election debates in Austria, Denmark and Germany and – to a lesser extent – Spain, Italy and other European countries. In this first of a series of blogs we zoom in on the debates in Denmark and Austria.

In Denmark the debate kicked off during Easter, when the newspaper Jyllandsposten published a frontpage story on the intimate connections between the Danish Conservative party and Cabinet DN, one of the many consultancy firms in the Brussels EU quarter lobbying for industry clients. Several leading Cabinet DN lobbyists are on the board of the Brussels branch of the Danish Conservative party and the anniversary celebration of the party branch was held at the Cabinet offices, with drinks and food paid by the lobby firm. Cabinet DN proudly posted a photo on its facebook page of Conservative party heavyweights Connie Hedegaard (climate Commissioner) and Bendt Bendtsen (MEP) at the party. The Jyllandsposten article featured a political scientist who pointed out that the relations between the Conservative politicians and the lobby firm could give the public the impression of conflicts of interest and undue influence. Danish politicians from across the political spectrum distanced themselves from the Conservatives and some heavily criticised the party for having such intimate relations with corporate lobbyists.

Jyllandsposten also highlighted MEP Bendt Bendtsen's second jobs on the board of Danske Bank and several other large Danish corporations. This became a major issue again a few days ago when the widely read tabloid EkstraBladet published several hard-hitting articles. Ekstrabladet highlighted that Bendtsen is a paid board member of Danske Bank and is also active in the European Parliament on issues of direct interest to the bank. In January 2012 for instance, Bendtsen hosted a lunch event on the EU's capital requirement directive CRD4, organised by lobby consultancy giant Fleishman Hillard.

In a frontpage article, the tabloid also highlights Bendtsen being vice-president of the European Parliament Beer Club, an MEP-industry forum run by Brewers of Europe, the beer industry lobby group.

Danish public radio published an excellent series of programs and articles about problematic aspects of the role of lobbying in Brussels. One article focused on the cash-for-amendments scandal that rocked the European Parliament in 2011, another on the weak implementation of the Parliament's ethics rules three years later and specifically the role of Parliament President Schulz in this.

Lobbying a cross-party issue in Austria

In Austria, at least three major political parties have raised the issue of stronger regulations around EU lobbying as a key issue for the elections. The Social Democrats (SPÖ) presented a concrete proposal for a stronger law to secure lobby transparency and ethics.

The Greens used the image of Ernst Strasser on their election posters. Strasser is the former ÖVP (EPP) MEP who is now convicted of corruption following the 2011 cash-for-amendments lobby scandal. The slogan “Menschen sind wichtiger als Lobbys” means “people are more important than lobbies”.

MEP Martin Ehrenhauser, the lead candidate of the left alliance Europa Anders, published an in-depth report showing that corporations sentenced or under investigation for breaking EU laws are still on European Commission 'expert groups', advising on the drafting of new EU laws which often benefit them financially, directly or indirectly.

The Austrain Chamber of Labour and other organisation held election debates and other activities to stress the need to curb excessive industry lobby power.

These high-profile activities might explain why no less than 159 Austrian MEP candidates signed the Politics for People pledge, promising to “to stand-up for citizens and democracy against the excessive lobbying influence of banks and big business.” www.politicsforpeople.eu With around 40% of the total number of candidates, this is highest share anywhere in Europe.

Lobbying firmly on the election agenda

The total number of candidates that have signed Europe-wide is now over 1250. Whatever the outcome after May 25th, in some countries this will have been the first election where the real problems topics of lobbying have been discussed. Be it in Austrian, Denmark or elsewhere in Europe, in a few days time we will know what share of elected MEPs are committed to work for change in Brussels.