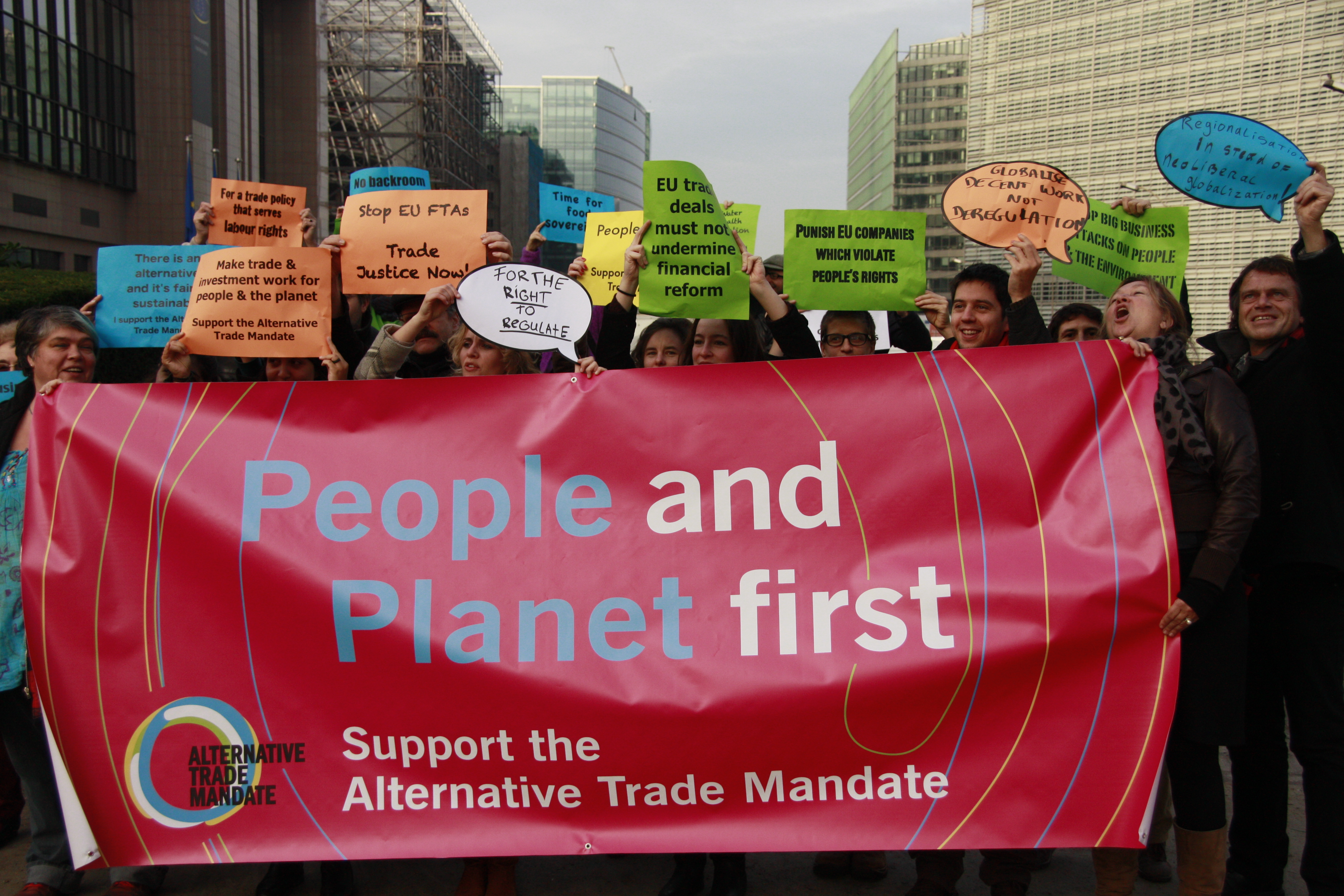 Today, a European alliance of over 50 civil society organisations1 will launch the Alternative Trade Mandate pledge campaign2, calling on European Parliament election candidates to make EU trade and investment policy serve people and the planet, not just the profit of a few large corporations.

“The EU’s current trade and investment policy is a recipe for disaster for people around the world. The EU is leading an aggressive agenda to open markets for global agri-business. This is wiping out small farmers and is a major cause of hunger. Excessive investor rights take away much needed policy space. We need to break away from this corporate driven agenda,” said Lyda Fernanda Forero of the Transnational Institute, a member of the Alternative Trade Mandate Alliance.

The online pledge campaign will run in six EU languages (EN, FR, ES, DE, GR, HU) and will enable activists and citizens to ask candidates to pledge in support of a paradigm shift in EU trade and investment policy. The website will monitor which candidates have supported different parts of the pledge.

MEP candidates will be asked to support measures that enable people to control their own local food systems as well as core labour standards and human rights’ assessments of EU trade and investment policy. Candidates will also be asked to oppose the controversial investor-state dispute settlement mechanism and to call on the European Commission to immediately publish all texts from trade and investment negotiations with third countries such as, for example, the United States.

“EU trade deals are negotiated behind closed doors in the interests of a few rich corporations. People who are affected by these deals, both in the EU and abroad, are not consulted. We need MEPs to stand up for an open and democratic EU trade policy-making process which is controlled by the people of Europe and their elected representatives, rather than being driven by unelected technocrats and corporate lobby groups,” said Sergi Corbalán, executive director of the Fair Trade Advocacy Office, a member of the Alternative Trade Mandate Alliance.

The pledge campaign is the result of a four-year process of public workshops held all over Europe during which the Alternative Trade Mandate was developed; it is a 20-page civil society proposal to democratise EU trade and investment policy and put environmental protection as well as human and labour rights at its heart3. Some MEPs have already supported the proposal via video messages4.

“At a time of multiple global crises, the European Parliament needs MEPs who will support trade rules that work for people and the planet. We need MEPs who will bring trade deals out of the shadows and into the light. We call on MEP candidates to stand up for democratic trade and investment rules that serve people, the economy and the environment at large – not just the profit interests of a few,” says Amélie Canonne, co-ordinator of the Alternative Trade Mandate Alliance.

Today and tomorrow, members of the Alternative Trade Mandate alliance will meet with MEPs and political groups in the European Parliament in Brussels to gather their support to the pledge campaign. At the margins of the EU-Africa Summit (in Brussels today and tomorrow), campaigners will today also participate in a morning protest against the EU’s Economic Partnership Agreements (EPAs) with countries from Africa, the Caribbean and the Pacific5.