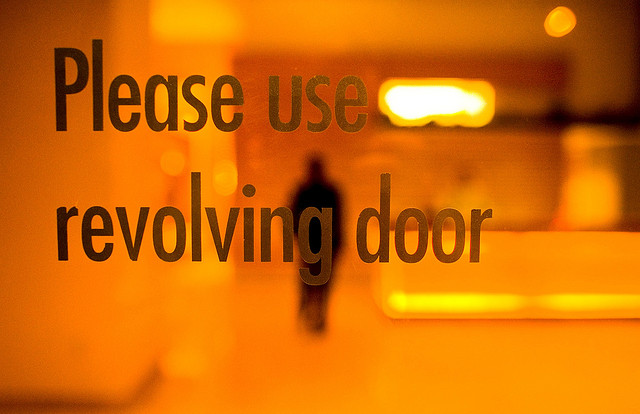 The MEPs who became corporate lobbyists

As we approach the European elections in late May, many members of the European Parliament (MEPs) will be considering their future careers, either because they have made the decision to step down or because they fear losing their seat. If experiences from the end of the previous parliamentary term in 2009 are any indication, many will be approached by lobby firms and industry groups hoping to entice them through the revolving door: the route from the European Parliament to Brussels' for-profit lobby circles is a well-trodden path.

From MEP to lobbyist

Karin Riis-Jørgensen was a Danish MEP for 15 years and during this time she sat on the committee for internal market and consumer protection, amongst others. Shortly after she left the Parliament in 2009, she became a senior advisor at lobby firm Kreab Gavin Anderson. Kreab is one of Brussels' biggest lobby consultancies with an annual lobby turnover of nearly four million euros. Its clients in 2012 (the most recent year for which information is available on the EU Transparency Register) include: Google, EDF, UBS, Goldman Sachs and Scania.

One of Riis-Jørgensen's clients at Kreab is Swedish Match, the controversial tobacco company which in 2012 was a central player in the Dalligate scandal. On 16 March 2011 and 6 March 2012 Riis-Jørgensen, together with Swedish Match's public affairs director, met with representatives from the European Commission's Secretariat General to discuss the review of the tobacco products directive.

Riis-Jørgensen has told CEO that “I now use my experience to advise Kreab and some of their clients on how to create a dialogue with EU decision-makers”. When asked about her work as a lobbyist and whether this constitutes a potential conflict of interest considering her background as an MEP, Riis-Jørgensen said:

Her full response can be read here.

Riis-Jørgensen is also the founder and chairwoman (unpaid) of the European Privacy Association (EPA), a Brussels-based lobby group which defends the interests of large IT corporations in the ongoing lobby battle around new EU rules for data privacy. The EPA Privacy Association is widely considered to be an astroturf 'front group' for digital multinationals lobbying against strong data privacy rules, although the EPA denies this claim.

Notwithstanding Riis-Jørgensen's defence, Corporate Europe Observatory (CEO) is concerned about the risk of possible conflicts of interest when MEPs go to work for lobby consultancies. Of course MEPs are, in their very nature, political animals. They are not EU officials who are clearly expected to be neutral and independent, so perhaps we should not be surprised when they leave office and follow their private interests.

Nonetheless, MEPs receive access to a lot of information, some of which is not publicly available, and they have extensive networks of political contacts throughout the European institutions. They also bring prestige and the ability to open doors for clients. They develop a huge wealth of inside knowledge about how 'the system' works and they gain all of this while they are in public office. To then use this to benefit corporate clients or employers leaves, at best, a nasty taste in the mouth, and at worst, the risk of a possible conflict of interest. As former MEPs, their lifelong access pass to the European Parliament allows them to come and go as they please with no checks to ensure they are not abusing the system by using their pass for lobbying purposes. A further possibility could be that MEPs whilst in office provide parliamentary favours to corporate friends, with the hope of securing a lucrative job after. There is no suggestion that any of the MEPs featured here have done this but it is another reason why we should be concerned when MEPs go through the revolving door.

Another case of a revolving door MEP is the UK's John Purvis who, during his 15 years in the legislature, was also the vice-chairman of the European Parliament’s economic and monetary affairs committee, where he apparently worked as rapporteur or ’shadow’ on “all major financial services legislation”. Whilst an MEP, Purvis was criticised for his outside interests and possible conflicts of interest. He was (and remains today) a director of Belgrave Capital Management which describes itself as “a London-based Investment Manager”.

After leaving the European Parliament in 2009, John Purvis joined cabinet DN, a Brussels-based lobby consultancy, as a senior adviser. As part of this work, he chairs Financial Future which is a lobby vehicle for the finance industry. The advisory board of Financial Future includes several others who have gone through the Brussels revolving door including Eddy Wymeersch and another former MEP Piia-Noora Kauppi. According to the EU Transparency Register, Financial Future generated €100,000-€150,000 turnover for cabinet DN in 2013.

Finnish MEP Piia-Noora Kauppi also focused on the work of the economic and monetary affairs committee, notably financial market legislation, during her nine years in the Parliament. She was rapporteur on several banking-related legislative dossiers and she was also chairwoman of the European Parliamentary Financial Services Forum which is funded by the finance industry. As a result, Kauppi was “actively involved in dialogue between EU bodies and financial service providers”.

In 2005, the Wall Street Journal reported that Kauppi, while working on a new EU money laundering directive, had “submitted amendments that borrowed word-for-word from the European Banking Industry Committee” which is a major banking industry lobby group. At the time, she acknowledged getting help from EBIC in writing her amendments, saying “I don't remember which ones came from EBIC and which came from other sources”.

Kauppi resigned as an MEP at the end of 2008 to become managing director of the Federation of Finnish Financial Services (FFI) which represents banks, insurers, finance houses, securities dealers, fund management companies and financial employers operating in Finland. When she took up her job at the FFI, Kauppi said:

"I have enjoyed working with financial affairs in the European Parliament very much. Now in my new position, I can make use of the experience gained from EU-level legislation on financial markets. The financial sector will play a more and more important role in the internal market in the future."

In December 2008, Kauppi was awarded the “worst conflict of interest” award at the “Worst Lobby Awards”, organised by NGOs including CEO.

Kauppi has told CEO that “There are no overlaps in my present duties with my past work as an MEP” and that she has not thought about the issue of conflicts of interest. Her full response can be read here.

The revolving door keeps on spinning...

It's not just centre-right MEPs who have been through the revolving door. The centre-left has its share of MEPs-turned-lobby-consultants too.

Gary Titley is a former leader of the UK Labour Party group in the European Parliament and four-term MEP. He was a member of a number of committees and he was also the socialist group’s vice-president responsible for the 2004 enlargement of the EU. When he joined lobbyists Hume Brophy in January 2010 as a senior advisor, managing partner John Hume said:

“We are delighted to have Gary join our team. He brings great legislative experience to Hume Brophy and key insight for our clients … Gary is a perfect fit for our expanding client base. Gary will work primarily on EU-related issues...”

Another former UK Labour MEP making a spin through the revolving door is Glyn Ford. Ford lost his seat in the European elections of 2009 after having been an MEP for 25 years. He is standing again on the Labour list in the 2014 elections. Within months of leaving the European Parliament in 2009, Ford had set up Polint, a UK-based EU consultancy operating in Brussels, which specialises in EU public affairs and international relations. It offers “specialised political and communications strategies, directed primarily at the European Parliament, European Commission and Council...”

Ford also joined the G+ lobby consultancy. G+ advertises Glyn Ford on its website as a senior adviser on East Asia policy, referring to Ford's East Asia policy experience from his time as an MEP:

“At the European Parliament he served on both the International Trade and Foreign Affairs Committees, particularly on dossiers related to Asia, giving him unrivalled knowledge and networks in Brussels and Strasbourg. During his time as an MEP, Glyn was responsible for following the free-trade agreement with the ASEAN group of countries, for implementing the Scientific Partnership Agreement with the Republic of Korea, and he was shadow draftsman on the EU-Japan and EU-China trade agreements. Glyn was also a member of the delegation with the Japanese Diet from 1984 to 2009.”

According to the EU's Transparency Register, G+'s clients in 2012 included a number of Japanese firms including: JEITA (Japan Electronics & Information Technology Industries Association), JMC (Japan Machinery Center for Trade and Investment) and JAMA (Japan Automobile Manufacturers Association). Polint's client list includes the same Japanese companies and it seems clear that Ford's work for G+ is carried out via his own consultancy.

The EU's Transparency Register does not make clear what specific policy issues Polint is lobbying on for each of its clients but it does indicate that the EU-Japan free trade negotiations are one of the issues which it works on. Ford worked on EU-Japan trade issues whilst an MEP.

Former MEPs can also be found within the ranks of EU business lobby groups too. Whilst a German MEP, Erika Mann had been a founding member and co-chair of the European Internet Foundation which brings MEPs and industry together to discuss matters related to the internet. She was also a member of the board in the Information Society Forum of the European Commission.

After she left the parliament in 2009, Mann joined the Computer and Communications Industry Association, and since November 2011, she has been the lead spokesperson for EU institutions for Facebook. In this role, she has been very keen to promote the Transatlantic Trade and Investment Partnership (TTIP). As reported by David Cronin, in April 2013, she spoke at a conference in Dublin, where Facebook’s international headquarters are located. Mann argued that it would be “extremely important” for an eventual deal to make the standards faced by internet companies in the EU and US “more coherent”.

There are practically no rules to regulate MEPs who go through the revolving door. Once they leave office at an election, MEPs receive a transitional allowance equivalent to one month's salary for every year they have been an MEP, with a minimum pay-out of six months' and a maximum of 24 months. But they have no revolving door obligations to match. Of course former MEPs need to be able to earn a living after they have left office, but it is pretty astounding that there are no rules to avoid conflicts of interest caused by the revolving door.

The only rule in the code of conduct for MEPs which applies to former MEPs concerns their entitlement to subsequently use the European Parliament's facilities. The code says that former MEPs cannot use their lifelong pass to access the parliament if they “engage in professional lobbying or representational activities directly linked to the European Union decision-making process”, but there is no process to monitor or enforce this.

We will have to wait for the new Parliament and a review of the code of conduct for MEPs for there to be an opportunity to introduce some revolving door rules for MEPs, but Martin Schulz, president of the European Parliament, could show leadership now by pro-actively asking MEPs who leave the Parliament in 2014 not to damage the reputation of the institution further, by avoiding the revolving door to corporate lobby jobs.