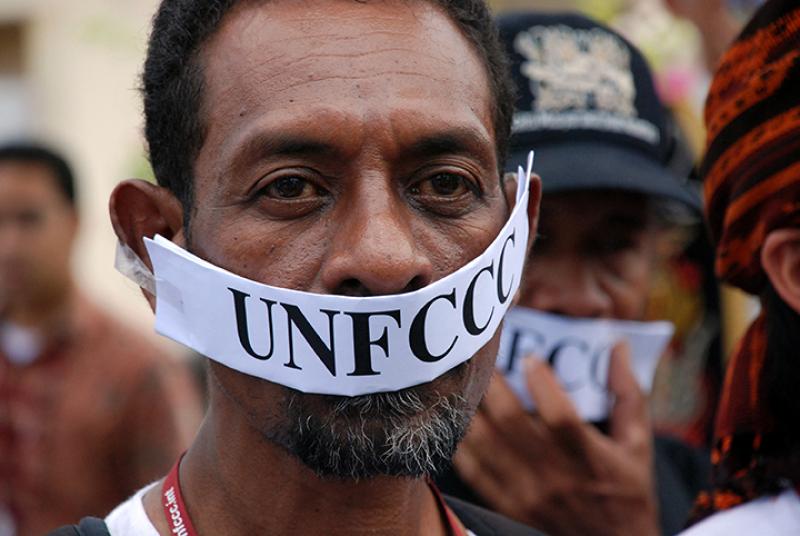 People’s voices silenced by the UNFCCC in Lima

The UN climate talks (called the UNFCCC) are a jargonistic, acronym-filled labyrinth in which opportunities to express the real concerns of citizens are slim. However, even those spaces that do exist are being shut down, as I found out after waiting two hours in a sweltering conference hall to give an intervention to governments, lambasting failed carbon markets – only to have it cancelled.

Those assembled in the room woud have heard how:

“…Europe’s flagship emissions trading scheme has dramatically failed to reduce emissions. But what an expensive failure: citizens like myself have been left to foot a multi-billion euro bill in the face of ever-more-painful austerity measures, yet those billions were channeled directly into the pockets of the biggest polluters.”

Just before I was due to speak on behalf of Climate Justice Now! (CJN!), it was decided that time had run out and civil society would have to be sacrificed.

Would the intervention have made a difference? Unlikely. The time given was a single minute – barely enough to introduce who I am (saying Corporate Europe Observatory is quite a mouthful). The room was almost empty, with most negotiators having left the sweaty plenary in search of lunch and a cold refreshment. And what’s decided in the climate talks usually has very little to do with climate change, science, or principled arguments and more about the interests of the biggest pro-carbon market economies like the EU and US (see this great introductory blog on the unwritten rules of the talks).

But from the perspective of principle it’s emblematic of how detached the talks are from reality, how marginalised the voices of citizens, communities on the frontline and those representing the public interest are. The attitude seems to be, 'An added extra if there’s time, but we don’t want it to get in the way of real discussions, now do we?'. As well as my own, the voices of youth, indigenous peoples, and women were also silenced for the reason of time.

This lack of connection to reality – where the interests of big polluters are promoted rather than the people already being affected by climate change – has undermined the UNFCCC’s legitimacy and put into question its role as a place of real solutions. The planned intervention posed that very challenge to those assembled:

“Is the UNFCCC a place for real solutions, or for making profit from hot air through carbon markets? …it is on [UNFCCC working group] SBSTA and all parties gathered to prove to the world that the UNFCCC is indeed a place of genuine solutions.”

Without people’s voices finding their way into the UNFCCC – not a one-minute slot plonked on the end if convenient, but through the proposal and delivery of transformational solutions – it will never be a vehicle for climate justice. But this is also up to those of us in the climate justice movement to reclaim the UNFCCC, from dirty energy interests and their lobbyists and from our national governments intent on listening to them.