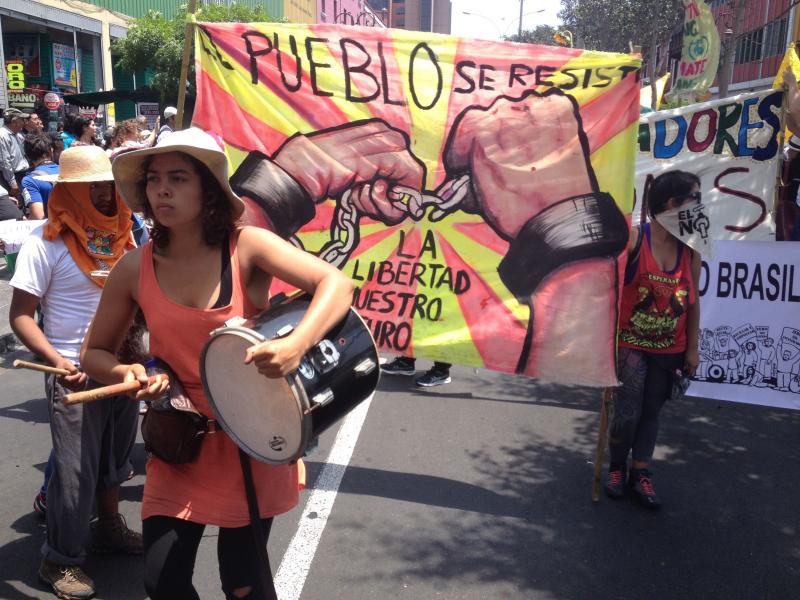 From the streets to the suites, protestors call for climate justice

After thousands marched through Lima demanding climate justice, hundreds then crossed town for a mass non-violent direct action against the multitude of corporate lobbyists gathered at the Hilton Hotel: not just one of the city's most expensive hotels but the host of the World Climate Summit.

March in the Defence of Mother Earth

Banners, posters, two-story bicycle contraptions, sloganned t-shirts, colourful costumes, papier maché corn cobs – all streamed out of the Casa Activa on Wednesday morning after more than a week's work by artists from around Latin America. Their destination: the Marcha en Defensa de la Madre Tierra (March in Defence of Mother Earth). 20,000 people from Peru's diverse geographical, social and political landscapes were joined by Bolivians (fighting plans for nuclear and fracking in their country), Ecuadorians (fighting oil drilling in the Yasuni) and communities from the rest of Latin American and the world. The central message was 'system change not climate change' but adorned across materials were messages against the privatisation of water and health care, ending extraction, fracking and GMOs, and resisting the mounting criminalisation and violence against activists (see our latest report).

Immediately after arriving to the end-point, Plaza St Martin, a group of radical youth set off to Parque Kennedy, the convergence point of the second action: a blockade of the World Climate Summit. More than 700 industry and government leaders were meeting to decide their own 'Road to Paris 2015', the date and place of the next UN climate conference, where countries are supposed to sign a historic deal. But the business 'solutions' have nothing to do with transforming our energy system or any system for that matter: they're false solutions like carbon captures and storage (a costly experimental technology which allows polluters to keep polluting) and carbon markets (which allow offsetting rather than real emissions cuts). They're solutions which allow business as usual rather than changing the economic system driving climate change.

It's our climate, not your business!

Sponsored by the likes of Alstom, who are involved in nuclear, coal and gas, the World Climate (Ltd) Summit boasted of bringing Shell, GDF Suez, the International Emissions Trading Association (IETA), BHP Billton and Novozymes, among others to take part. While negotiators and ministers were talking about a (catastrophically weak) multilateral deal in COP20, business was cooking up its own plan in parallel. In fact, after leaving the action word got through that business had actually demanded to be at the negotiating table, to directly have a say on – and even write – text.

“We want to find an opportunity where we are more inside the tent than on the sidelines,” said Peter Robinson chief executive of the US Council for International Business. He added businesses should be “co-parties” in the talks, not mere observers.

The World Climate Summit as a target was a no-brainer – every person who heard of it wanted to take action. The only problem was the location: the Hilton sat in the heart of Miraflores, the richest area in the country, with the highest concentration of wealth and the main hub for tourism hence heavily securitised. Even Peruvian colleagues, who were seasoned march organisers, had never marched there – there had never been one there. But when the people come together and get organised...

After gathering in the park, flanked by squads of riot police (the march was not authorised – and those who had tried to march immediately had already faced police violence en route), the array of colours, creative inventions (including a cactus with taps coming out of it – see video) and diverse communities set off down the main road, occupying bicycle lanes, pavements and eventually the whole road. Chants like 'por la vida, el agua, cambiemos el sistema' flew up and down the march, while violinists and drummers provided the soundtrack. 400 faces – from Latin America, Africa, Asia, Europe and North America, old and young – looked on defiantly as they marched, lined by police protecting the expensive passing boutiques. Reporters and their cameras also provided protection, undoubtedly adding to the international dimension of the event and tipping the balance in our favour in the eyes of the security forces (no one likes a scandal, especially when the world is watching).

Holed up at the Hilton

We were eventually stopped just short of the Hilton by three lines of police, intent on not letting us past but also keen to identify the leaders of this guerilla demonstration in the heart of Lima's most well-preened district. They offered those who stepped forward the opportunity to go inside the summit, but the collective decision was that if they want to talk to us, let them come outside. Instead we stayed strong, building our strength through collective experiences.

One of the most powerful moments came when all present gathered in a circle and counted out loud to 43, standing in solidarity with the 43 Mexican students kidnapped by police on the mayor's orders to stop them protesting. They were subsequently handed over to drug gangs who then killed them. Announcements were made for the others who have also lost their lives trying to protest and stand up to state power, particularly in defence of the environment and local territories and livelihoods. Testimonies came from the global North and South of those fighting extraction, such as the El Quimbo dam in Colombia who are fighting the Italo-Spanish conglomerate, Enel-Endesa, as well as more information on the manipulative antics of those on the inside, calling out the corporations holed up in the Hilton. Speaker after speaker underlined what what was needed: system change not climate change; 'capitalism = climate chaos' - a message so prominent at Flood Street; dismantle corporate power. But the strongest message - one which was clear at the last UN climate talks in Warsaw - was that we the people had the real power, not those in the Hilton; we the people had the solutions; we the people would win - not today but eventually. One prominent banner read:

"Nos enterraron sin saber que eramos semillas [they tried to bury us, but they didn't know we were seeds]"

As the sun sunk down, the last act brought echoes of the Zapatistas in Mexico, getting our messages to penetrate the lines of police: paper aeroplanes flew above people's heads and towards the helmets and shields and beyond them, with messages scrawled across their wings. The end was peaceful and on our own terms, deciding to fight another day rather than push towards the Hilton and face inevitable repression and tear gas – despite some groups who would normally continued to fight until the end. Instead we left stronger, having built something between us across borders, pushed the boundaries at a local level (marching in Miraflores and pushing back against the crack down on protest), and took our fight to the seat of power.

No time to lose

Walking back through the neighbourhood, lit by the orange-red sunset, news trickled in about business' demands – that while we had spent the week trying to get them out of our climate policy, away from our political leaders, they were trying to secure a far bigger role. The lack of progress in Lima – and the complete dismissal of the needs of developing countries and those already being affected – makes it clearer than ever that we need to keep business, particularly the dirty energy industry, out of the COP, out of our national governments, and delegitimise the very idea that they have a role in solving a problem that is of their making. Quite a job before us, but seeing the thousands in the streets, the hundreds at the hilton, the energy and creativity we have at our disposal, its not just a possibility its a necessity.