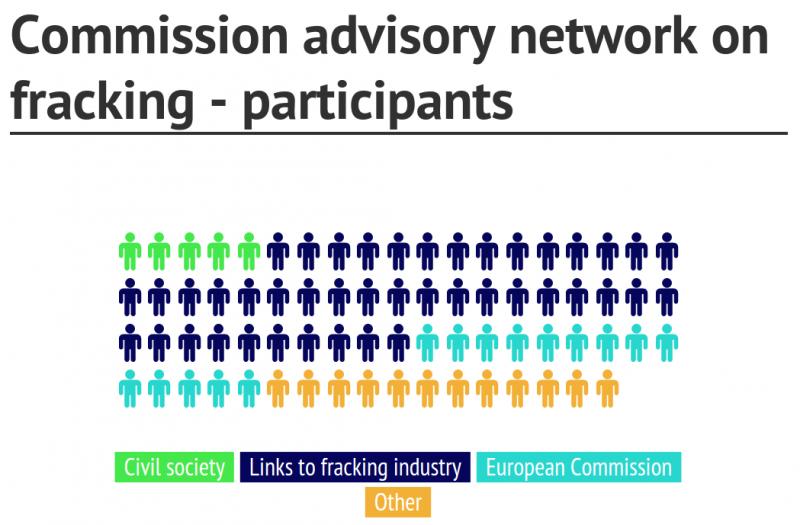 The Commission is talking up its climate ambition on the road to the Paris UN climate talks. But a new briefing shows that its advisory group on shale gas is opening the back door to fracking, despite massive public opposition.

The newly created “European Science and Technology Network on Unconventional Hydrocarbon Extraction” (or Network) is supposed to assess current projects, as well as recommend which technologies are appropriate and safe enough for Europe. Unfortunately for the public, the majority of its members (including those from industry, academia and other research bodies) have a clear financial stake in the expansion of fracking and are in no position to objectively assess its safety. Moreover, many have aggressively lobbied for weaker safety rules.

The Network is composed of 74 members, 14 of whom work for the European Commission. Of the 60 that do not:

This conflict of interest is not only jeopardising public safety and the climate, but also citizens’ faith in the European Commission being able to put their interests before industry profit. Given the public opposition to fracking in Europe and the well-documented associated environmental problems, the European Commission should not listen to a lobby that wants to move the goalposts from asking not “if” Europe wants fracking, but “how”.

The European Commission should seriously question whether the privileged access enjoyed by companies causing climate change is conflicting with the public interest, and therefore whether the Network should be scrapped.

**UPDATE: SINCE PUBLISHING THE REPORT, IT HAS COME TO LIGHT THAT THERE ARE ONLY FOUR, RATHER THAN FIVE CHAIRS, AS CONOCOPHILLIPS IS NOT A CHAIR**