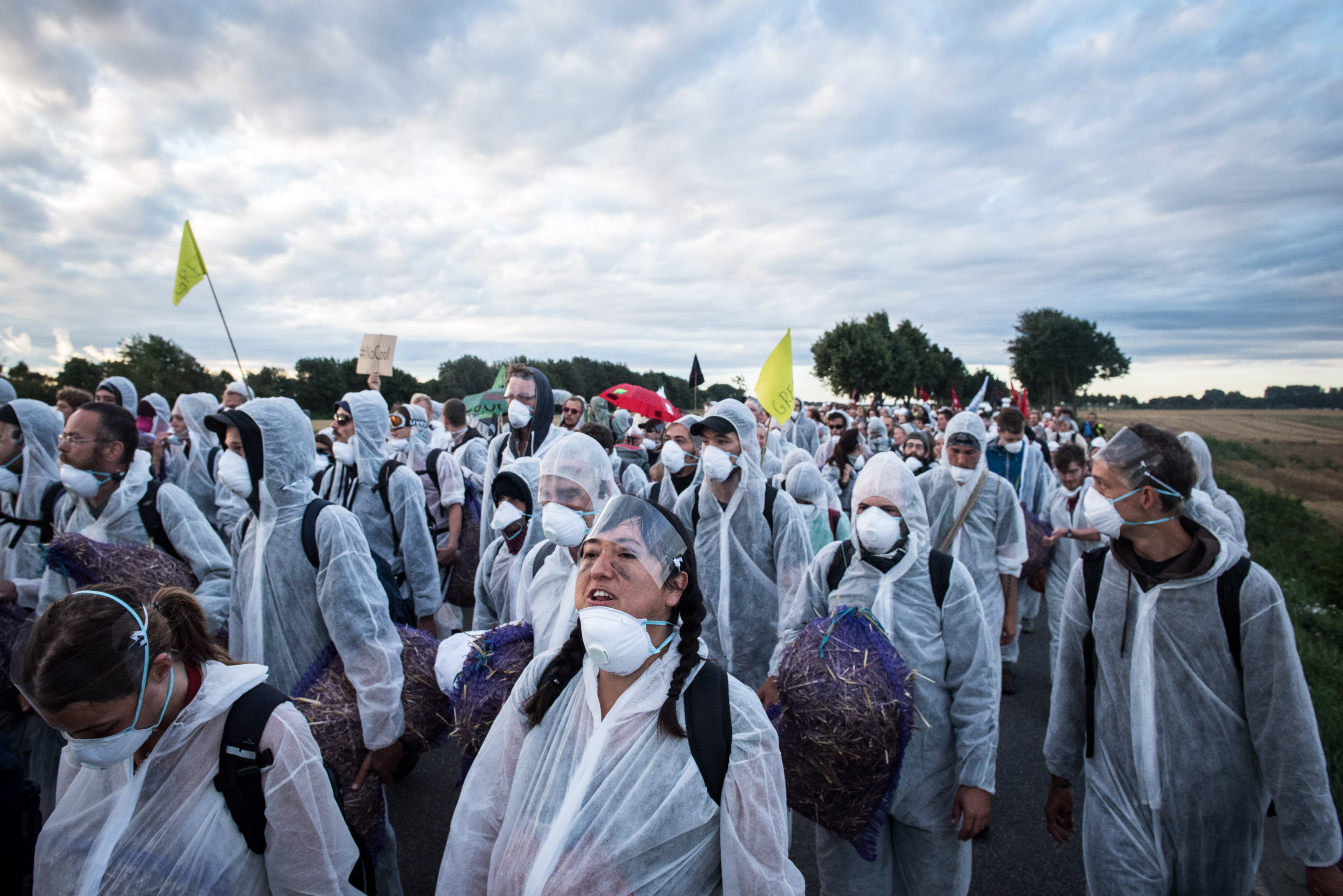 Four months before world governments meet in Paris to negotiate the deal they claim will “save the climate”, 1500 protestors took matters into their own hands by entering an opencast lignite mine owned by energy provider RWE in western Germany. With this massive act of civil disobedience on 15th August they successfully blocked four of the mine's five diggers, bringing the destructive machines to a halt for most of the day.

Under the slogan “Ende Gelaende”, which loosely translates into “this far and no further”, the action brought together people from all different kinds of backgrounds and countries, old and young, experienced and newcomers, to the world of civil disobedience. They were united by their determination to stop the exploration of an energy source, which is destroying entire landscapes at the same time as being a major driver of climate change in Europe. Extracting and burning lignite and coal is the most CO2-intense way of producing electricity. Even conservative estimates state that in order to keep the average global temperature rise below 2c – let alone below the 1.5c being called for by more than a hundred countries of the global south – 89% of Europe's coal reserves have to be kept in the ground. Yet there still is no political will in Germany to phase out coal, which provides more than 40% of its electricity, with new plants under construction.

The impressive action in the Rhineland adds a new dimension to the battle against climate change in Europe. One of the key motivations behind it was the lack of faith that the corporate-captured UN climate talks in Paris this winter would deliver what's necessary – something CEO has also written about. An increasing number of people no longer rely on the official political process, which has proven incapable of effectively reducing emissions. Instead, they are taking matters into their own hands and are willing to face police aggression and custody along the way. In order to enter the mine, protesters had to overcome police blockades, gallons of pepper spray and unwieldy batons. In the pit, several hundred of RWE's own security force drove the police around in company pickup-trucks and actively 'kettled' those who were held. At the end of the action more than 800 activists where held in custody for several hours. The relationship between the police and RWE has traditionally been a close one: the head of the local police responsible for the operation during the action used to be a member of the advisory board of RWE, and only resigned a couple of days before the action.

The strongly criticized RWE-police cooperation in the pit is only one very obvious example of how RWE is determined to defend its economic interests – supported by the state. The company's close relationship to decision makers has also helped, with many German municipalities holding shares in RWE, while politicians can also be found on the company's advisory board. This year German MEP Birgit Colin-Langen stepped down after criticism from CEO and its German partner organisation, LobbyControl (article in German). Such close ties underpin RWE's legitimacy to operate but also provide political influence: only recently, the coal giant teamed up with Swedish energy company Vattenfall to successfully lobby against a levy on coal-fired power plants older than 20 years. Despite the devastating impacts of its operations, RWE continues to claim to be climate conscious, using its small renewable energy projects to greenwash its dirty image, all the while lobbying fiercely for dirty energy – a contradiction that earned them the worst lobby award in 2010.

The massive blockade of the coal pit is part of a growing movement around the world targeting the heart of the climate crisis by taking direct action against CO2 intensive infrastructure and corporations. As governments gear up towards the negotiations in Paris, plans are under way to take the fight to the streets of the French capital. Events like “EndeGelände” and the direct-action “Climate Games” that took place in Amsterdam earlier this summer are key stepping stones, providing training and information-sharing opportunities that ensure the mass actions organised around COP21 will not plead for the corporate-captured UN climate process to deliver. Instead the focus is on fundamentally changing the current economic system and denouncing the corporate climate criminals and their massive political influence trying to block the necessary change. As more people realise that our governments and their negotiations are failing to halt the crisis, more are taking matters into their own hands. For more information on grass roots mobilisations around Paris, particularly the mass action planned for the day the negotiations end, on the 12th of December, check www.climatejusticeaction.net or www.climategames.net in the coming months.

But Paris is itself a stepping stone, and next spring there are already plans to shut down carbon intensive infrastructure projects around the planet, the same projects threatening communities and causing climate change, because people are saying, louder and louder, enough is enoug; “This far and no further”.