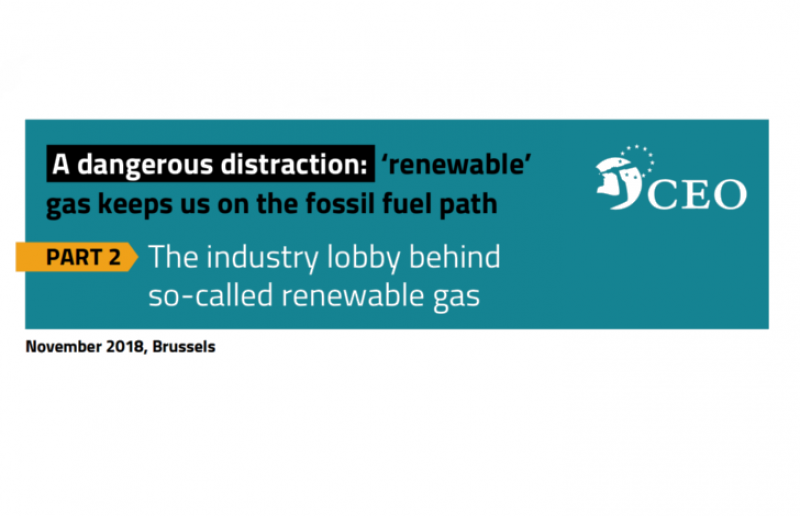 The recent report by the UN’s Intergovernmental Panel on Climate Change (IPCC) underlines the urgency with which we need to drastically move away from fossil fuels. Couple this with the European Union’s wish to re-establish itself as a global climate leader, and it spells bad news for the gas industry, whose primary product is a fossil fuel. In response, the last 18 months the sector has increased its lobbying efforts to convince policy-makers that gas is in fact compatible with the Paris Agreement climate targets agreed in 2015.

Part I in full: The 7 myths industry uses to sell us so-called renewable gas

Their strategy is to claim that so-called ‘renewable gas’ is the way forward – massively overstating its climate credentials and how much we can produce by 2050 – and if renewable gas can’t meet all future gas demand, then non-renewable gas (ie fossil gas) can be ‘decarbonised’ – despite a lack of proof that this is realistic or achievable. A closer look reveals industry is more concerned with greenwashing its image and staying in business than tackling climate change. Attacking renewable electricity deployment in favour of gas infrastructure shows what lengths they will go to in order to keep fossil gas flowing well into the future.

Corporate Europe Observatory takes a first glimpse at the lobbying behind this push. Our research reveals a host of different tactics employed, from buying the Brussels media to co-opting the NGO community. The first section of Part 2 looks at the lobby efforts around renewable gas directed at the European Commission’s Department for Energy (DG Energy), as well as how the Commission has reciprocated. The report also focuses on the role of the European Council, and has a special profile of the biggest renewable gas lobbyist, the Gas for Climate Coalition. Other sections look at the important role of trade associations, cross-sectoral coordination, collaboration with NGOs and using the Brussels media.

As the European Commission draws up plans to make our gas system ‘Paris compliant’ by 2050, it’s make or break time for industry and its argument that it is part of a low-carbon future. However, don’t expect them to admit that the potential for renewable gas by 2050 has been massively over-hyped, while ‘decarbonised’ gas remains hypothetical (see Part 1, our myth buster). Both remain a dangerous distraction, keeping the door firmly open to continued use of fossil fuels. This entails disaster not just for the climate, but also the communities and their environments along the supply chain. This report is just a snapshot of some of what’s going on, but lobbying will undoubtedly intensify in the coming years as the Commission finalises its plans for gas market reform in 2020 and passes them to the European Parliament and the Council.