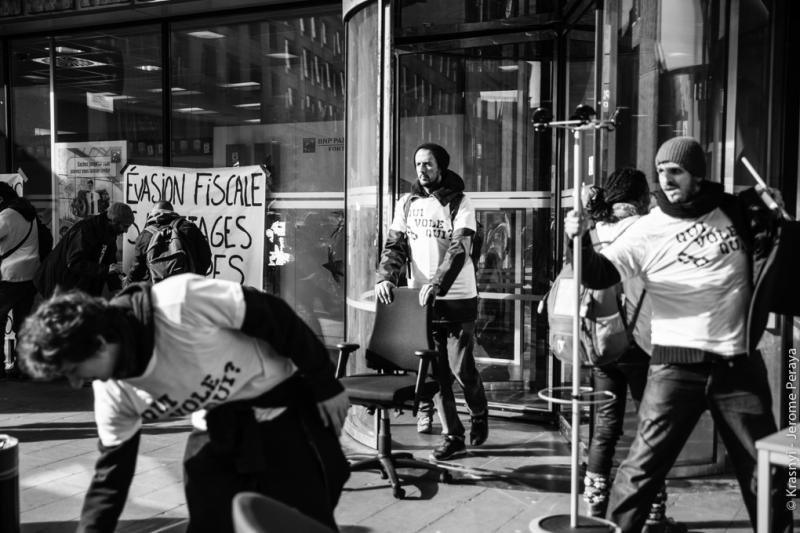 Many who walked past the BNP Paribas Fortis' central Brussels branch during their lunch break yesterday were surprised by what they saw: activists-turned-bailiffs removing tables, chairs and other materials from the building, leaving them out on the pavement. At a time of severe cuts to social spending in Belgium because all the money has been spent bailing out the banks, citizens repossessed bank furniture as the first step in recouping the billions of Euros that BNP Paribas – who controversially bought Begian bank Fortis in 2009 – helped its client avoid via its 214 branches located in tax havens.

Slightly confused by the whole episode, which was organised by the Collectif Qui Vole Qui? (Who Steals What? Collective), the branch director was presented by the bailiffs with some light reading material, which if followed could avoid future repossessions: The Banking Black Book, Bankocracy and Banks that Pillage, Banks that Cry. While those at BNP would surely benefit from reading how the banking system has distorted and destroyed the economy and society, there are a few here in Brussels who could benefit even more. President of the European Commission, Jean Claude Juncker, as well as his Finance Commissioner, Pierre Moscovici, would do well to heed the texts, gaining an insight into how the interests of the European people can be put before the same banking institutions responsible for the 2008 economic crisis and the ensuing austerity.

The Commission has so far been part of the problem. Belgians are seeing social expenditure slashed and job security attacked, all in the name of austerity, i.e. paying for bailing out the reckless banks. According to those repossessing furniture, 35,000 people lost their unemployment benefits in January to cut 250 million Euros from the budget, yet over the same period banks in Belgium like BNP facilitated the evasion of at least 10 billion Euros in taxes – which could cover the unemployment benefit 40 times over. What's more, #SwissLeaks revealed that HSBC alone oversaw six billion Euros leave Belgium for Switzerland between 2006-07 to avoid paying taxes to the state. But rather than naming the real culprits and calling time on the power of the financial industry, the European Commission has been ratcheting up the pressure on Belgium by threatening hundreds of millions of Euros in fines if it didn't severely slash spending while weakening labour protections.

But the role of the Commission in this farce goes far further given its cosy relationship with the same institutions that caused the crisis – particularly BNP – and its endorsement of their prescribed medicines. When the global economy collapsed in 2008 due to light-touch self-regulation in finance, the Commission pulled together a group of so-called experts to recommend how to avoid this happening again. Luckily for BNP – and unfortunately for the public – this group was headed up by senior banker and financial lobbyist Jacques De Larosiere, a man who viewed 'common sense' as more effective than regulation and who, between 1998 and 2008 (i.e. until the crisis), was an advisor to the Chairman of BNP Paribas. He was joined by other equally culpable financial institutions, also opposing regulation, like Lehman Brothers, Goldman Sachs, Citigroup and the UK's Financial Services Authority. Unsurprisingly the group did not advocate for tougher regulations and left many of the structural causes of the crisis unquestioned. They did not challenge the role of corporate banks in today's economy, or what it should be in a post-crisis Europe. Unfortunately two weeks after their findings were released, the Commission adopted the report as the basis of their response to the crisis. For his part, Jacques de Larosière went on from the advisory group to lobby for the big banks in their attempt to water down international agreements on banking regulation.

Ensuring business as usual continued for BNP was made much easier by being present in numerous other Commission 'expert groups', such as the EU Clearing and Settlement: Legal Certainty Group, the European Securities Markets Expert Group or the Clearing and Settlement Advisory and Monitoring Expert Group 2. In each group their employees not only “assist the Commission in the preparation of legislation or in policy definition” on important financial issues that determine how safe our banking system is, but they do so in a 'personal capacity', rather than in the name of BNP. This means the advice they give to the Commission is assumed to be in the public interest, so what they say has nothing to do with what's good for business but, in fact, what's good for me and you – unlikely as that might sound. Worryingly, they are also sitting in an Expert Group on derivatives, alongside other shady banks like Barclays, Deutsche Bank, HSBC, JP Morgan and Santander. That means the same banks who profited enormously before the crisis from creating, buying and selling derivatives – blamed as a big driver of the crash and labelled a 'financial weapon of mass destruction' by Warren Buffet – are also telling the Commission how to regulate them.

Research by CEO shows that in the years following the economic meltdown in 2008, the finance industry has dominated these so-called expert groups. More than 70% of advisors who have sat in these groups have direct ties to the financial industry, while NGOs (0.8%) and trade unions (0.5%) are barely represented. This imbalance – which is not unique to the area of finance – led the European Ombudsman to conclude in her investigation on the topic of expert groups that wholesale reform is needed, which MEPs, NGOs and trade unions are all keen to ensure the Commission delivers.

Is it any wonder the Commission leaves the banks alone while forcing the rest of us to pay for the billions they spirit away into tax havens through cuts to public spending? Advising the Commission are those very same institutions, happy bedfellows who agree the solution is not banking regulation, or investing in socially and ecologically useful things, but cuts to public spending and wages, leaving banks to use their 'common sense' – even as it transpires that BNP has been hit with the third largest fines of any bank between 2009-2014 for illegal activities (offshore tax evasion, money laundering, fraudulent financial products etc.). Readers of The Banking Black Book will be well aware, as ATTAC and BASTA outline the full extent of BNP's wrongdoings. Surely that should disqualify them as legitimate counsel, stop them serving in expert groups or giving advice to the Commission? But as if to confirm their privileged status above the law, BNP even recruited ex-Commissioner Meglena Kuneva to sit on its board in 2010 during the midst of the banking crisis, a woman who while at the Commission had previously led a crackdown on banking opacity.

Putting justice - and the banks - into public hands

The action against BNP was one small example of people no longer having faith in institutions delivering the justice they deserve, and instead taking matters into their own hands. The Qui Vole Qui? Collective think that more than just justice deserves to be in the hands of the people: they're calling for banks to also be socialised – put into the hands of the people and their workers so they can work for the whole of society rather than the 1%. A similar action happened last week in Bayonne, France, with bailiffs coming for the tax dodging HSBC; UK Uncut has been successfully taking creative direct actions against tax dodgers for some time; and many more actions are likely to happen.

On the door of the Brussels branch of BNP Paribas Fortis, a sign was hung, reading: 'Closed because of Tax Evasion', its banking licence revoked by the bailiffs. Banks – and all corporations – depend on a social licence to operate, and by taking action people can remove that social licence, toxify their reputations and ensure that elected officials (as well as unelected institutions such as the Commission) don't dare to listen to their policies or swallow their business as usual medicine. It's happened with tobacco companies, it's happening with fossil fuel companies, and big banks are no different. The last line of the press release from the action reads:

“From Bayonne to Brussels, from Athens to the City of London, from Madrid to Berlin, banks should safeguard their furniture”.

But they have far more to lose than a few tables and chairs.