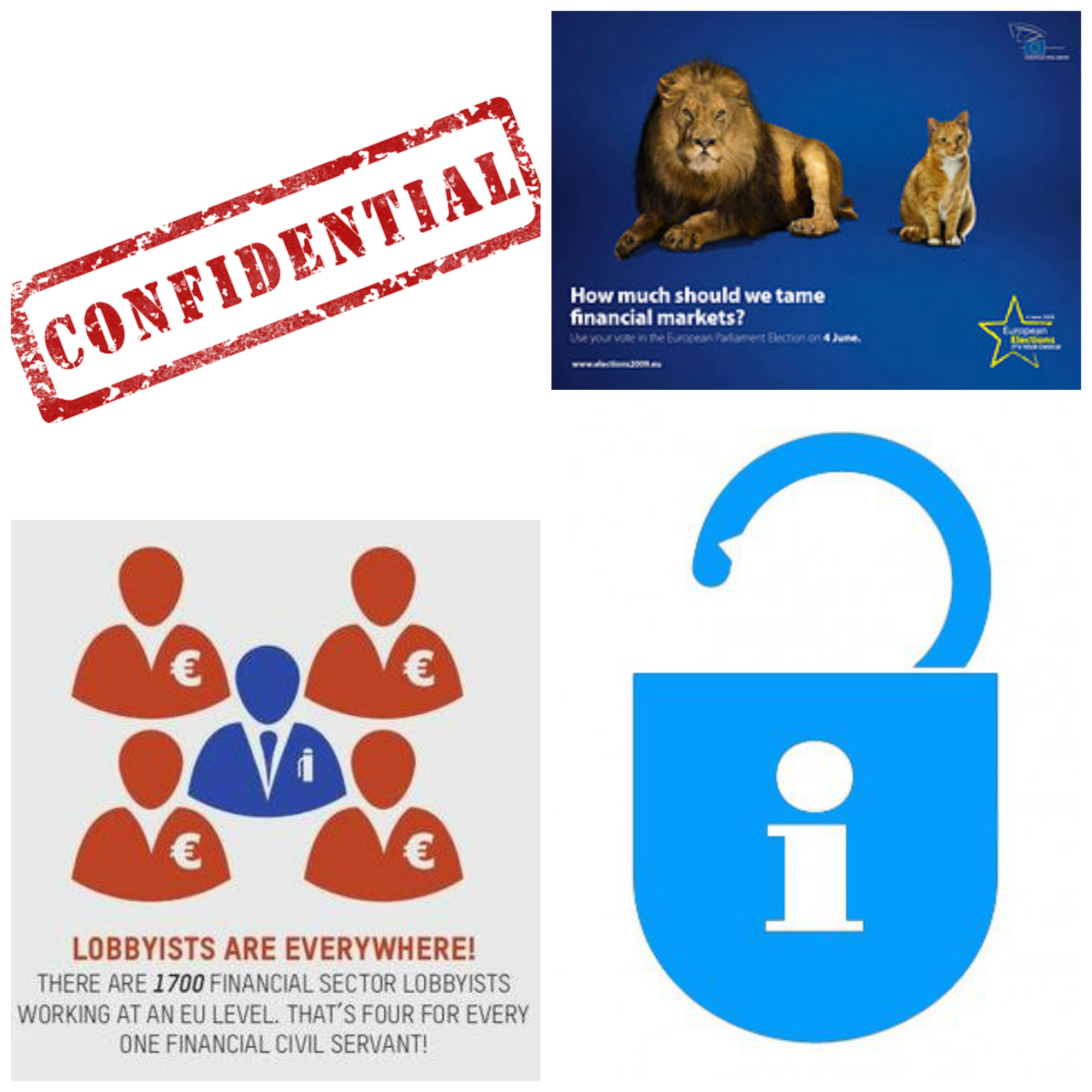 Lobbying on finance a private matter

There are daily meetings between the financial lobby and the Commission, and they’re mainly about issues crucial to society at large. Despite this, the public is only able to access piecemeal information on what is discussed, and even then with unacceptable delays. Given the huge impact the financial sector has had on society, keeping this lobbying behind closed doors is deeply problematic. Transparency reform is needed.

Since the financial system went into shock and sent millions into unemployment and poverty, the political significance of the rules governing banks and investment funds has been beyond dispute. And you would think this would have made transparency in the decision process paramount and mandatory at all levels, including at the level of the EU Commission, the institution which pretty much sets the political agenda in the area. Not least when one considers the massive influx of lobbyists for the financial sector who visit civil servants on a daily basis. Is it not fair to ask what goes on at the meetings?

Not if you ask the Internal Market and Services Directorate General (DG MARKT). You can get some documents, but don’t count on getting the information you’re asking for, and certainly not on time. According to DG MARKT, the rules on freedom of information provide them with a very ample space to deny access, avoid note taking, and delay responses for such a long time that the response is of little or no current interest at the time of arrival. The delays can be so protracted, many might even forget they asked in the first place.

That’s the impression that has emerged from a full year of tug-of-war between CEO and DG MARKT, in which the former asked the latter for information on meetings between civil servants and financial lobbyists that had taken place. It took from March 2014 to February 2015 (full process with links to all documents available here) to get the information. Clearly there is a need for a change of approach at DG MARKT if the rules governing access to documents are to make any sense.

The scale of lobbying

What major issues were debated in the EU institutions at the time? Major issues include wrangles over a Financial Transaction Tax (on cooling high frequency trading and taxing the financial sector), on banking separation (to eg prevent banks from speculating with regular customers money), on the banking union (on supervision of big banks and the costs of winding them down or bailing them out), to name but a few. These issues have clearly been the topic of many meetings between the financial lobby and the Commission. Yet only a little bit of information seeps out, thanks to a rather cynical approach at DG MARKT to freedom of information.

First hurdle: no such document

Over the years, lots of examples of undue influence exerted by the financial industry has been uncovered by CEO and others, and documents obtained through requests to the Commission via EU rules on freedom of information, are often key. But the obstacles are many.

The first obstacle in this case was the denial  of the existence of “formal documents”. In the words of DG MARKT, they “have a system of internal debriefing, which does not give rise to formal documents”, implying that some documents can be considered “informal” and hence not within the scope of freedom of information requests (response to CEO, 16. July 2014).  CEO argued in September 2014, that in the relevant rules, there is no such distinction. Apparently that argument was accepted by DG MARKT, and an investigation into the vaults of documents was initiated, leading to the disclosure – in November 2014, three months later – that only 67 documents of the kind could be found. In other words, no available notes from the remaining 366 meetings would surface in the course of the tug-of-war between DG MARKT and CEO.

The second obstacle is a rather astonishing use of three different exemptions in the rules on access to documents, used on a large scale in this case: one that exempts documents where disclosure would damage “financial, monetary or economic policy of the Community or a Member State”, the protection for “the purpose of inspection, investigations and audits”, and finally one to protect the “commercial interest” of the company represented by the lobbyists (regulation 1049/2001, article 4).  Do such exemptions have no merit? They probably do, if administered with sincerity. If not, they can become major undue obstacles to freedom of information. And in this case there is even proof they have been used by DG MARKT as a tool to prevent access to information not covered by the exemptions.

Proof emerges from the final batch of documents received from DG MARKT. In November CEO received a number of reports/minutes from DG MARKT, accompanied by a full list of available documents (except for five documents handled separately). However, only 36, about half of the documents were actually included: CEO had been refused access to the remaining 31. Furthermore, 11 documents, about a third of the received documents, were heavily censored. Later – in late February 2015 after going through a formal complaint procedure – CEO received all documents, most of which were almost complete. This last batch allows us to investigate documents that had been retained, and sections removed from documents released earlier.

So, what was in the explosive documents that were withheld initially? While a few documents do indeed deal with sensitive issues, it is very difficult to accept they would fall under either of the exemptions (full batch available here, following numbers refer to documents). For instance, while it is intriguing to read about meetings between the Commission and the credit rating agencies (Standard & Poors no. 12 and 13, Moody’s no. 11) on their sovereign ratings (creditworthiness of governments), and read how the Commission seems to lobby the agencies to adopt a favourable approach to the effect of the banking union, there seems to be no justification for withholding such documents (no. 37, 48, 52, 59). Also, while it may be annoying to some banks that their fundamentally hostile approach to banking separation is put on display, it can hardly be classified as a business secret (eg. no. 34, 36, 37, 43, 45, 46, 48 and 58). The main feature of the censorship of full documents, seem to be that the public is not to be informed about standard lobbying efforts of the financial industry.

Another kind of censorship – that of striking out major parts of the text – has been used extensively. Of the 36 documents handed over in the first round, 11 were censored to such an extent that the full documents might as well have been retained. Again, a later disclosure enables us to see most of what was stricken in the first place (a comparison between censored documents and the ones received at the end of the procedure, can be seen here).

So, what exactly was in the documents that led DG MARKT to strike out significant parts of those documents? While some might contain small hints of a business strategy, most minutes describe discussions between civil servants and lobby groups on particular legislative proposals – they are exchanges of views.

Once more, most of the heavily censored documents are about standard lobbying meetings, be they with accounting firms concerned with the effects of upcoming legislation on accounting, the disgruntled view of the London Stock Exchange to transparency requirements, or the attempt of the Wallenberg corporation to depict the Swedish experience as something that would speak against banking separation.

The fourth obstacle is straightforward: to delay the processing of the request. In this case, the first letter was shipped to DG MARKT on 18 March 2014, and only on the 20 February 2015 was the process finally completed, and minutes of the meetings were handed over, some censored, though not heavily. Ironically, it might never have come to this, as the Commission noted a delay of a few days on CEO's part when filing the complaint. Considering the many months of delay due to slow workings of the other party, that was striking. In the end the query was dropped, the procedure continued, and in the end, CEO received the documents.

Receiving documents, though, is not enough to claim success. While some of the documents were of use, it is important to stress the absence of notes from the remaining 366 meetings. And last but not least, the delay tactics prevent public scrutiny at the time when it is most needed: in the meantime a lot has happened at the political stage: there has been a change of Commission, legal acts discussed in the documents have been adopted, others have been changed. To the extent the request was meant to provide insight into current political debates with information on the positioning and strategies of particular lobby groups, including the arguments they use with the Commission, it was a futile exercise.

Delay of that kind is key in this case. It may be argued that the stubbornness of CEO researcher Olivier Hoedeman bore fruit in the end, and that the standard complaint procedure compelled DG MARKT to revise its decision. But having to spend valuable time and energy to fight off heavy, unfounded censorship, to get access to a limited selection of the material a year later, can hardly be regarded as a success. With or without reform of the rules governing access to documents, there is a need for reform of the procedures at DG MARKT if freedom of information is to be taken seriously.

I have with great pleasure read this article, and i must admit that I did not fully understand the extent of lobbyism until now. When watching eg. House Of Cards, I could not believe the lobbyism going on in that series, but it’s becoming clear that it’s not far from the truth. In Denmark from where I am from we are experiencing the same challenges on Lobbying on finance a private matter, as described here: http://www.billig-webhosting.dk/rabat-koder/unoeuro-rabatkode.php . As of yesterday a financial bill was passed where lobbyists clearly had a saying in what was in it. Read it here (in Danish): http://www.fm.dk/publikationer/2015/finanslov-2015 .
Thank you for this enlightening publication.