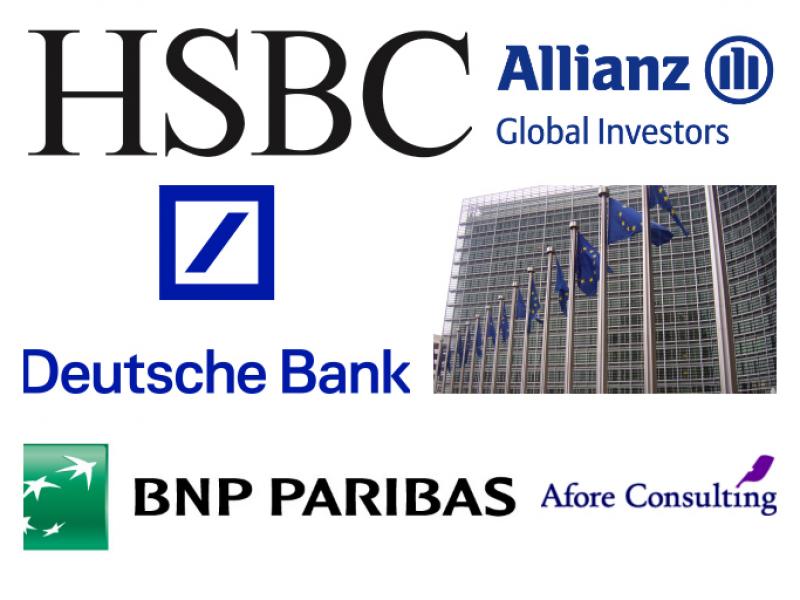 Well over 90 per cent of meetings between DG FISMA (the Commission's department for financial regulation) officials not covered by transparency rules and lobbyists are with the corporate sector.

Since the end of 2014, following an initiative by new European Commission President Juncker, the meetings of commissioners, their cabinets and directors-general with lobbyists are published online. This transparency initiative has enabled the public to see which lobbyists get most meetings and has exposed a strong corporate dominance: more than 75 per cent of the meetings of commissioners and top Commission officials are with corporate lobbyists.1

While it is very valuable that this information is now in the public domain, Juncker's transparency initiative only covers around 250 top Commission officials, a small minority of the estimated 6000 officials directly involved in policy-making. The lobby meetings currently disclosed are only the tip of the iceberg.

To find out how many lobby meetings are taking place with Commission officials that are not covered by Juncker's transparency initiative, ALTER-EU earlier this year submitted freedom of information (FOI) requests to five Commission departments, asking for lists of meetings that mid-level Commission officials have had with lobbyists.2 Four of the Commission departments rejected the FOI requests, arguing that they did not have lists of meetings with lobbyists. DG FISMA, however, responded in a far more transparent way and released a list of 456 meetings held in the period between December 2014 and July 2015.3 DG FISMA, the Commission's department for financial regulation, should be congratulated for this. The vast difference between the response from DG FISMA and other Directorate Generals demonstrates that the Commission is able to record and disclose information on lobby meetings, but the political will to do so is lacking in most Commission departments. ALTER-EU will submit a complaint to the European Ombudsman about the untransparent approach of the other four Commission DGs.

Juncker´s transparency initiative shows only tip of the iceberg

Firstly, the list confirms that an enormous number of lobby meetings are happening with Commission officials who are not covered by Juncker's online transparency initiative. Eleven of the meetings were with government agencies, not with lobbyists, but this still leaves a whopping 445 lobby meetings in just eight months,4 an average of more than 55 per month. A recent report by Transparency International showed that 489 meetings with lobbyists were disclosed by Commissioner Jonathan Hill and EU top officials responsible for financial market regulation in the first 12 months of the Juncker transparency initiative. That means just over 40 per month.5 This means that most lobby meetings are currently not pro-actively disclosed. There is a clear public interest in knowing which lobbyists get access to the Commission officials on the level just under the top-250 officials and the scale of those revealed by the DG FISMA list shows the need to broaden Juncker's transparency measures. Only if all lobby meetings are disclosed, will citizens be truly able to find out who is influencing EU policy.

Secondly, well over 90 per cent of DG FISMA's meetings with lobbyists are with the corporate sector and less than 4 per cent were with NGOs. In total, 353 meetings (79,3 per cent) were with banks, companies and corporate lobby groups. Another 51 meetings (11.5 per cent) were with lobby consultancy firms working for corporate clients. Combined, that's 90.8 per cent of the meetings, but also several of the 17 meetings with organisations registered as think-tanks should be included, increasing the corporate share of the meetings even futher. The think-tank category also includes pro-ISDS lobby group EFILA (which is backed by major law firms), the Association of European Energy Exchanges and others that are more accurately described as corporate lobbies. The DG FISMA list has 21 meetings with organisations that are in the EU Transparency Register as NGOs and 11 meetings with local governments (respectively 4.7 and 2,5 per cent). However, quite a few of the groups registered as NGOs would also be accurately described as business lobbies. Examples include the European Landowners' Organization, the European Money Markets Institute, the European Parliamentary Financial Services Forum and Financial Future. The share of meetings with actual NGOs is therefore lower than 4 per cent.

Transparency International analysis has shown 89% of the lobby meetings of Commissioner Jonathan Hill and other Commission top-officials on financial markets were with corporate lobbyists.6 The DG FISMA list shows that for the meetings with officials on the level just under this, the imbalance is even worse. This extreme imbalance is in stark contrast with Commission President Juncker's political guidelines for his Commission, in which he states that “While contact with stakeholders is a natural and important part of the work of a Member of the Commission, all such contacts should be conducted with transparency and Members of the Commission should seek to ensure an appropriate balance and representativeness in the stakeholders they meet.”7

Afore Consulting, a lobby consultancy firm working for clients such as Morgan Stanley, American Express and Goldman Sachs, had most meetings with DG FISMA (10), followed by the European Banking Federation and megabank HSBC, both with nine meetings. The NGO with most meetings is Financewatch, which had two meetings during eight months. 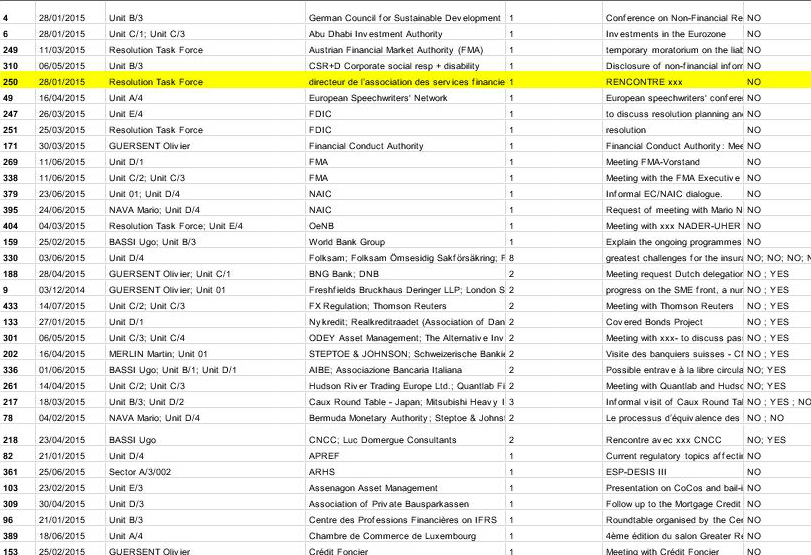 Thirdly, no less than 91meetings (20.4 per cent) were attended by lobbyists representing companies or organisations that were not in the EU's lobby transparency register at the time of the meeting. Since then a number of there unregistered companies and lobby groups have joined the register,8 but the DG FISMA list shows clearly that it remains possible for banks, companies and lobby groups to get meetings with EU officials without being registered. Examples of unregistered lobbyists who had meetings with DG FISMA include lobby consultancies such as EUTOP, law firms like Gibson, Dunn & Crutcher, lobby groups like Verband der Private Bausparkassen and investment firms like Assenagon Asset Management. This underlines the importance of broadening of the ban on meeting unregistered lobbyists to cover all Commission officials and of replacing the current voluntary register with a proper, legally-binding register.

Top-15 lobbyists with most meetings:

1A recent study by Transparency International concluded that ¨over the last year, there have been over 7,000 meetings between high-level Commission officials and lobbyists. With 75% of the total, meetings with corporate lobbyists dominate the Commission’s agenda.¨ http://www.transparencyinternational.eu/2015/12/press-release-banks-tech...

2The five European Commission DGs were DG Trade, DG Energy, DG Clima, DG Connect and DG FISMA. Commissioners Cañete, Hill and Malmström are among the Commissioners with most meetings with lobbyists which makes it interesting to explore the level of lobbying towards lower-ranking Commission officials working at these DGs. The requests were submitted via the asktheeu.org website, which means that all correspondence can be found online:

4The DG FISMA list contains many meetings where it is unclear who the organisations are, because the description is unprecise or merely an unclear abbreviation. Four of the meetings in the DG FISMA list were with organisations that we could not clearly identify. Researchers from ALTER-EU member groups Corporate Europe Observatory, Friends of the Earth Europe, LobbyControl and AccessInfo analysed the list of meetings released by DG FISMA to assess whether the companies/organisations attending the meetings were in the EU´s Transparency Register (at the time of the meeting and currently) and added to which category of lobbyists they belong (using the Transparency Register´s division between inhouse corporate lobbyists, consultanices/ and law firms, think tanks, NGOs, and local/regional governments).

6See page 12 of the report ¨7,000 and counting Lobby meetings of the European Commission¨,Transparency International, December 2015; http://www.transparencyinternational.eu/wp-content/uploads/2015/11/Lobby...

871 meetings happened with firms or organisations that are still unregistered. In some cases these were meetings attended by several companies and lobby groups, of which some were unregistered.