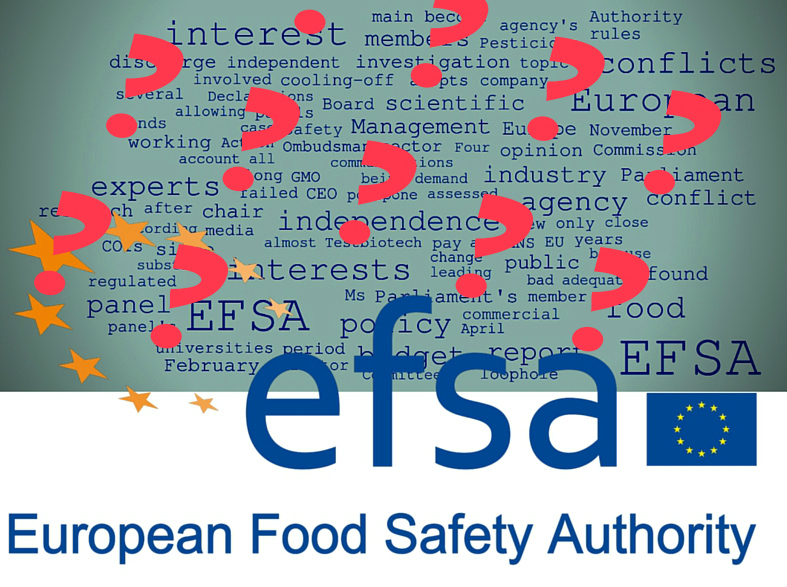 Conflicts of Interest at the European Food Safety Authority: Enough is enough!

An Open Letter to the European Parliament's Budget Control Committee

PDF of the open letter

On 26 January 2016, EFSA announced it was hiring a new director of communications, Ms Barbara Gallani, starting next May 1st. Ms Gallani has a long career in the food sector. There is a question, though: today, this person still is the Chief Scientist of the Food and Drink Federation, the food industry's trade federation in the UK. As a lobbyist, Ms Gallani was also applying to become a member of EFSA's Management Board, in one of the seats kept for “representatives of the food chain” there. She since withdrew her application.1

With this appointment, EFSA once again indicates that, at best, it does not understand its political environment, or that, at worst, it does not care about its independence from the sector it is regulating. Whichever way, this decision was a disaster for what was left of EFSA's credibility.

Enough is enough. We are writing to you to express our dismay. We have been discussing for many years with EFSA to try to convince this EU agency to reinforce its integrity, become more transparent and independent. We have been patient and constructive, participated in countless public and private consultations, open discussions and conferences. The European Parliament also, year after year since 2011, across political groups, made clear it wanted the agency to improve its reputation and in particular impose for two years a cooling off period on financial conflicts of interests.

In its follow-up report to the Parliament's demands, the agency promised improvements but refused to close the loophole allowing conflicts of interest to happen (point 10). Experts with financial interests in companies regulated by EFSA can still be found in its scientific panels (and working groups), because the agency keeps evaluating these persons' interests only according to the specific topic of the group, not whether these interests are de facto regulated by EFSA. The more specific the topic, the bigger the loophole. With this system, a scientist's research on fries paid by a fast food company can be appointed to a scientific panel on hamburgers; different topic indeed, but is this really convincing as an independence policy?

Some things did change at the agency. Small things. But too small. After a series of critical rulings on EFSA's independence policy, the European Ombudsman suggested she might launch a self-task investigation into EFSA's procedures on independence. Media reports keep accumulating2 on the existence of conflicts of interest at the agency, which now is so afraid of media exposure that it regularly declines media requests. The agency keeps blaming bad journalism and says it needs to improve its communications. By hiring a lobbyist from the food industry?

EFSA fears not being able to find enough qualified experts to fill its panels would it implement the Parliament's demand. But there are simple solutions to this, such as hearing any expert whose expertise would be considered interesting but not giving him/her a say on the panel's work.

The agency has another, much better excuse: it cannot pay these experts and hardly has any budget to do research on its own. Free help is rare, and public help, from national agencies, research centers and universities, is being cut. That leaves lobbyists more space.

Having to sacrifice independence to operational constraints is a rather desperate situation for a public risk assessment agency. But the blame falls essentially on the Commission for not giving EFSA a budget to at least pay 200 independent experts for the EU's 500 million citizens' food safety. EFSA's budget is even facing cuts. The European Commission has systematically dismissed MEPs' concerns on conflicts of interest at EFSA for the past years.

We now ask you to do two things:

- postpone EFSA's budget discharge as long as they do not enact a serious independence policy on regulated commercial interests. They have the perfect opportunity to do it now since they have planned a revision of their independence policy for this year.

- postpone EFSA's budget discharge as long as the European Commission does not credibly commit to provide substantial additional budget to EFSA to pay independent experts and develop in-house research.

- 10 November 2009: Suzy Renckens, leading staff member of EFSA's GMO Panel, found to have left the authority for biotech company Syngenta without cooling-off period. On 29 May 2013, the EU Ombudsman declared that EFSA failed to take adequate measures to prevent conflict of interests arising from this step.

- 23 February 2011 : four members of the Management Board (Kovac, Horst, Ruprich, Vanthemsche) are found to have links with industry by CEO.

- December 2011: EFSA adopts a new independence policy (main feature: industry employees are no longer allowed to become experts for EFSA) stating that “only evident and general conflicts of interest should be banned”.

- December 2011 : 10 out of 13 members of EFSA's working group on TTC have COIs with industry, report by PAN Europe

- February 2012: EFSA's Director publishes the implementing rules of the agency's new independence policy. The main current loophole in EFSA's independence policy (interests assessed according to the panel's mandate) is introduced.

- May 2012: EFSA's Management Board chair (D. Banati) resigns her position as chair to become the executive director of ILSI.

- May 2012: the European Parliament postpones EFSA's budget discharge for 6 months because of its bad management of conflicts of interests.

- October 2012: an investigation by the European Court of Auditors finds EFSA's management of conflicts of interest situations ''inadequate'' and called for reform. But since these findings were related to the pre-2011 policy EFSA considers the job is already done.

- December 2012: Le Monde describes how almost half of the members of EFSA's working group on endocrine disruptors have conflicts of interest.

- February 2014 : 52 % of scientists working on pesticides mixtures in food for EFSA have ties with industry, report by Pesticides Action Network Europe

- 3 April 2014: as part of EFSA's budget discharge procedure, the European Parliament adopts a resolution demanding that the agency imposes “a two-year cooling-off period to all material interests related to the commercial agrifood sector”.

- July 2014: EFSA publishes a reworded and slightly improved version of its independence policy, but the main loopholes remain. The European Parliament demands are refused.

- 30 November 2014: German public TV ARD reveals that several experts involved in EFSA's 2011 scientific opinion on the toxicity of endosulfan as a fish feed additive have a conflict of interest.

- January 2015: the European Ombudsman found that “EFSA has failed to take adequate account of the changing nature of universities in its conflict of interest rules and its Declarations of Interests forms” by not requesting details upon universities' contractual engagements with private companies and demanded that “EFSA should revise its conflict of interest rules, and the related instructions and forms it uses for declarations of interests.”

- 29 April 2015: as part of EFSA's budget procedure discharge, the European Parliament adopts a resolution where it “strongly regrets that the main loopholes in the Authority's implementing rules have not been closed” despite EFSA's policy review and “reiterates its call that the Authority should apply a two-year cooling-off period to all material interests related to the commercial agri-food sector, including research funding, consultancy contracts and decision-making positions in industry-captured organisations”.

- 31st May 2015: an in-depth investigation on ethoxyquin by public German TV ZDF is denied an interview by EFSA to explain how it evaluates this substance, used in animal feed and at the centre of many concerns documented in the film, in particular in salmon. One of EFSA's experts involved in the opinion has a conflict of interest documented in the report. EFSA explained it could not talk to a TV crew before its work on the substance was finished (its November 2015 scientific opinion was inconclusive).

- October 2015: EFSA sends its follow-up report to the European Parliament and explains that, again, it refuses the Parliament's demand, considering that its current independence policy “guarantees a robust and sophisticated way to avoid potential conflicts while at the same time

allowing EFSA to attract and retain suitable scientific expertise”. The agency promises to introduce two-years cooling-off periods for certain interests of experts working in EFSA panels, but since these will be only assessed taking account the panel mandate and not the Agency's broader remit to be independent from economic interests it regulates, the change is likely to be very limited.

- 1st February 2016: Swedish radio reveals several conflicts of interest among the authors of EFSA's 2010 scientific opinion on sugar and obesity.

- 28 February 2016: the documentary “Light, mensonges et calories” on French public TV France 5 points to the conflicts of interest of several EFSA experts involved in the agency's 2013 scientific opinion on aspartame.

1Two members of the Management Board already come from the food industry.