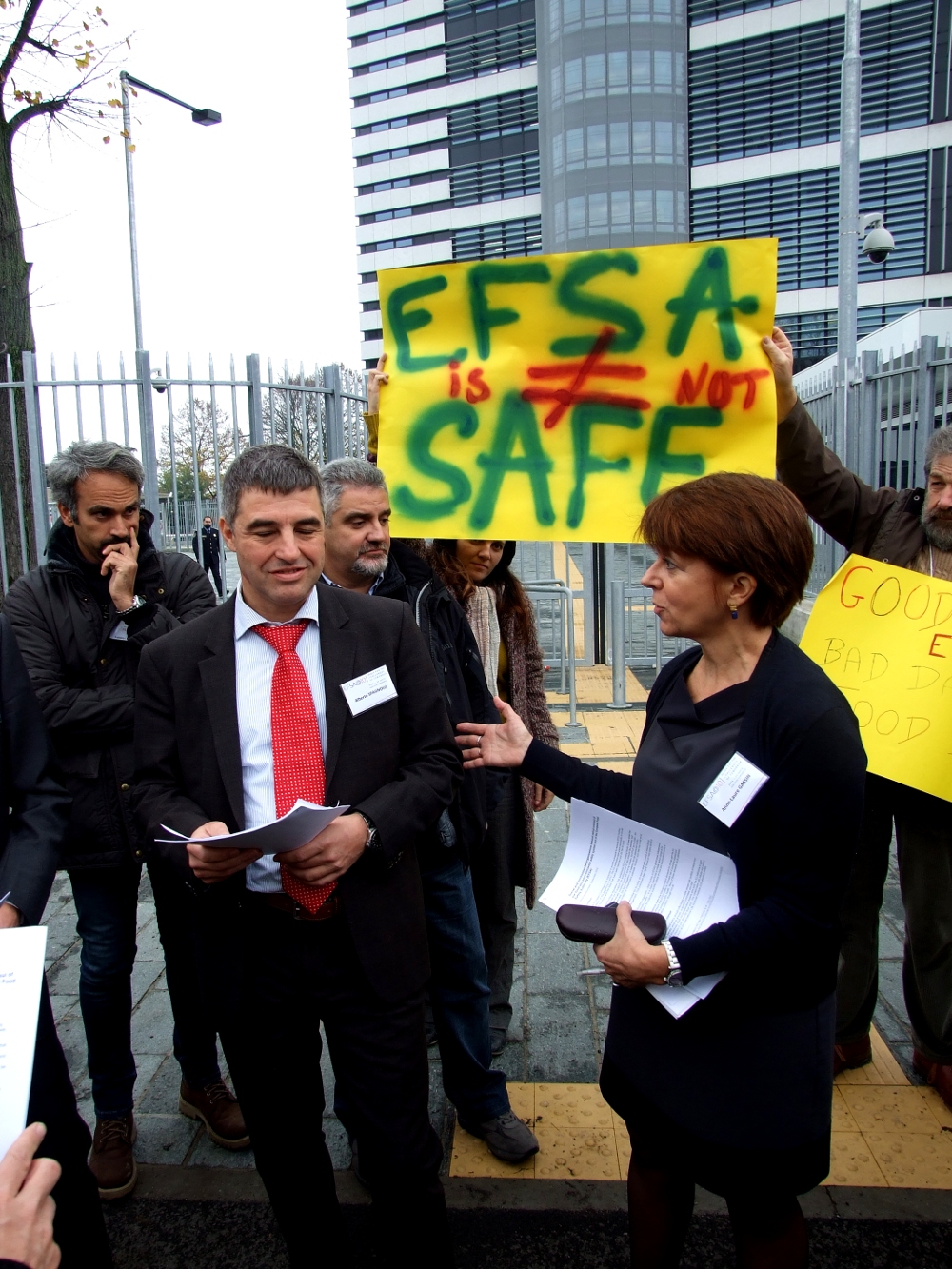 Ms Barbara Gallani, who will become EFSA's Director for Communications from 1 May, was up until late March 2016 working for the largest lobby group for the food and drink industry in the UK, the Food and Drink Federation (FDF). She also was on the governance board of an organisation where FDF plays an active role, SALSA (Safe and Local Supplier Approval), and on the Advisory Board of Food Integrity, an EU Research project where she represented FDF.

(Picture: Ms Gallani's predecessor discussing with protestors in front of EFSA in November 2012)

From a strictly technical perspective, EFSA's hiring of Ms Gallani makes sense. They say: “Her unique skillset, which includes communications, stakeholder relations and food policy advice at a national and European level, coupled with her training as a scientist, make her ideally suited for the role.” But this story of a perfect match unravels the second one takes a broader look. See our full story.

Since most of EFSA's workload is about assessing the risks of the food industry's products, which in turn determines these products' market authorisation, the conflict of interest is obvious. But neither the European Commission, who drew the shortlist of candidates, nor EFSA's Executive Director, who made the final choice (and refused to disclose the reasons), seemed to feel there was a problem. Ms Gallani took the time to answer our questions and made clear that she would “follow EFSA's advice on any mitigation measures considered appropriate to address any perception of conflict of interest in relation to my appointment”: in other words, EFSA's independence is something for EFSA to deal with.

EFSA has also affirmed it is ready to put extra measures in place to address “any perception of a conflict of interest”. That is welcome. The first measure stipulates that Ms Gallani should “abstain for at least one year after being recruited from bilateral interactions of a professional nature with FDF (Food & Drink Federation), FDE (FoodDrinkEurope), and SALSA (Safe and Local Supplier Approval) employees or agents at all levels”. Will Ms Gallani be allowed to keep her position on SALSA's governance board and Food Integrity's Advisory Board after a year? That remains unclear and should not be.

The second measure EFSA has put in place is, for once, consistent with the problem it is meant to solve. Ms Gallani is expected to “abstain from the review or consideration of any file triggered by the British food and drink industry or that would have a particularly significant impact on the relevant industry to the UK”. In the real world, it means her job will be impossible to implement. After all, the largest members of the “British food and drink industry”, whose products Ms Gallani is forbidden to work on, are companies active in most EU countries (Nestlé, Mars, Mondelez, Danone, Cargill, Coca-Cola etc). If this is properly implemented – as it should, because these are the interests Ms Gallani defended professionally for eight years – Ms Gallani will be a Communications Director not allowed to say anything about any product coming from the largest companies her agency is meant to regulate. We respectfully suggest to EFSA's Director to instead select someone whose background will not make the exercise of the job impossible.

The EU Food Safety Authority has repeatedly insisted it wants to regain public trust. Why, then, this hiring decision? The “mitigation” measures foreseen do not so much bring confidence than they reveal that with an independence policy inspired from the reality of the food and drink market, Ms Gallani would not have been hired from a private lobby interest the EFSA's job it is to regulate. The European Commission and EFSA's management can keep denying there is an independence problem at the agency. But denial – or, as the agency's response has been so far, piling up consultations and costly consultancy reports during five years of pretending to deal with the issue – is not going to solve it.